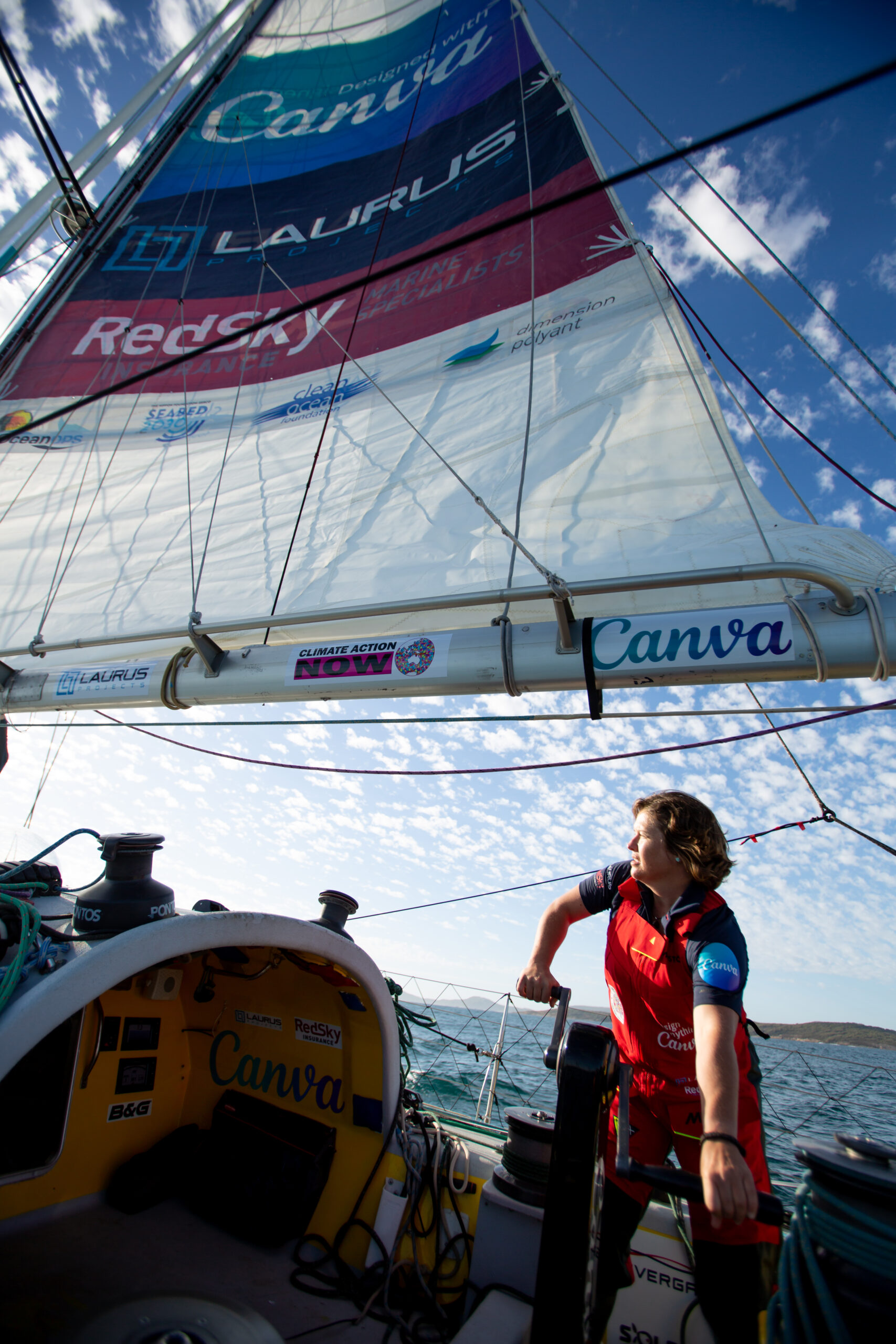 In her latest blog post, Blair puts in the fourth reef, only to realise that something’s not quite right with the mainsail.

Well yesterday after I finished putting the third reef in the main sail, I had been planning on finishing dinner and going to bed. It was around 3am and I was exhausted, however this storm had other ideas. Just as I started to think sleep was going to be possible the winds started to reach 40 knots making it time to put the fourth reef in the mainsail.

I had yet to take off my Musto MPX Foul weather pants and mid layer jacket so i only needed to put on my life jacket and climb on deck. As soon as I cleared the shelter of the cubby, I was slapped in the face with pelting rain. “This will be fun,” I thought. Not wanting to get rained on more than necessary, I quickly set about shorting the mainsail to the final stage of the fourth reef. This is a really small piece of sail, but it is just big enough in the really strong winds to allow me to keep control.

I wasn’t hanging out there more than needed, as soon as I was done, I crawled back inside the cabin and shook the water off me. I felt that there was a high probability that I would need to put the boat in the hove to position this morning to get through the worst of this storm, so instead of going directly to bed I decided to give it an hour for the storm to fill in and I would watch the winds and made a call.

Over the course of that hour the winds went from averaging 35 knots all the way up to 50 knots, but we were handling it, occasionally we wiped out on a wave and had a knockdown but mostly we were holding out own in the conditions. Mainly this is because the larger swell hasn’t arrived as yet, so we were only really contending with the winds.

The surface of the ocean was a frothing boiling mess. There was so much moisture in the air from the rain and from the tops of the waves getting ripped off from the wind that breathing was a little difficult. The swell was still at around five-six metres at this stage, but it was due to get bigger over the course of the day. The waves were filled with storm petrels and other birds playing on the pressure waves.

I watched the winds at 50 knots for nearly another whole hour, but it all felt fine to go to bed finally, so at 11am I crawled into my warm bunk with my hot water bottle. There wasn’t anything I could do to help the Climate Action now at this stage and I didn’t feel the conditions warranted the hove to manoeuvre because she was still sailing like a champ. We were rounding up often, but that is expected in these conditions, so I wasn’t overly concerned about it. It was more annoying because the autopilot off course alarms would keep tripping.

I also knew that I wasn’t likely to be getting any sleep and resigned myself to read my book in bed. I was just starting to doze off when the engine, that I had been using to charge the batteries, sputtered to a stop. We had been on a good heal so I was hoping that this was the only problem. I climbed out of bed and tried turning it on a few times, but it didn’t want to go I ended up just leaving it to deal with later. The batteries were already at 80 per cent, so I was okay there and I really thought it had to do with the possibility of sucking air from the fuel tank as we were leaning over so much.

Back in bed and the storm continued to rage around me but somehow, I was able to fall into a series of short naps over the course of a couple of hours. While I was far from rested, it was at least something.  By 5pm the winds had eased back to mostly 35 knots however the larger swells had arrived so we were now getting regular knockdowns and occasionally a wave would break against the hull and a huge wall of water would break over us making it sound like a waterfall outside. The winds had also now swung around from the NW to the west and so it was time to gybe.

I got kitted up in my Musto gear and went on deck to look around. Things had calmed to some degree, but it was still pouring rain, so it wasn’t going to be a fun time on deck. When I looked to the bow, I was surprised to see that my mainsail didn’t look right. It took me a minute to see why, but the luff line for the reefing point on reef four had broken free. To tie the sail down at the different reefing points there is a rope that runs through the front of the sail, passing through an eyelet and runs back to the cockpit, there is a second rope that does the same thing through the back of the sail and these ropes are the reefing lines.

Well, the front reefing line passes through a friction ring or diverting ring before running back to the winches, and that ring appears to have broken free of its normal location. This has caused the luff of the sail to no longer be pulled tight and so it is all warped and crinkled. It’s not great. And to be fair I was surprised that I didn’t actually rip the front of the sail from the mast when this happened because all the pressure of the wind is now riding on a few attachment points where the sail is connected to the mast with the cars, rather than that pressure getting spread across the whole of the sail.  But it had held on, and now I needed to do something about it.

As the winds were back to 30-35 knots anyway, I had been thinking of shaking out the fourth reef and setting up the mainsail with the third reef to get a little more speed as the conditions will continue to ease. So, I decided to gybe first while the sail was small and then shake out the reef to the third reef and I would then run the repair in the light airs that are expected on the back of this storm. It was an easy repair as I only needed to re-lash the friction ring back on to the pad eye or strong point, so it shouldn’t take too long.

Once that was all done, I went below and thankfully I had the for-thought to make some porridge and had left it sitting in the easy oven. So, although I was completely soaked (I had managed to cop a wave that went right down the back of my neck), I was able to come below and get dry and warm fairly quickly. After I ate, I was so tired I simply went right back to bed until midnight when I woke to send you all this blog.

So, while I can I am going to return to bed and try for a little more sleep before the micro plastic sample changes get me up again but before I go I would like to thank the following amazing degree sponsor.

025 East – Brynley King in memory of Ken Raobeia Sigrah – Thank you Brynley for your amazing support and Ken is someone who I was very honoured to have met and I loved that he always had such a big smile on his face.