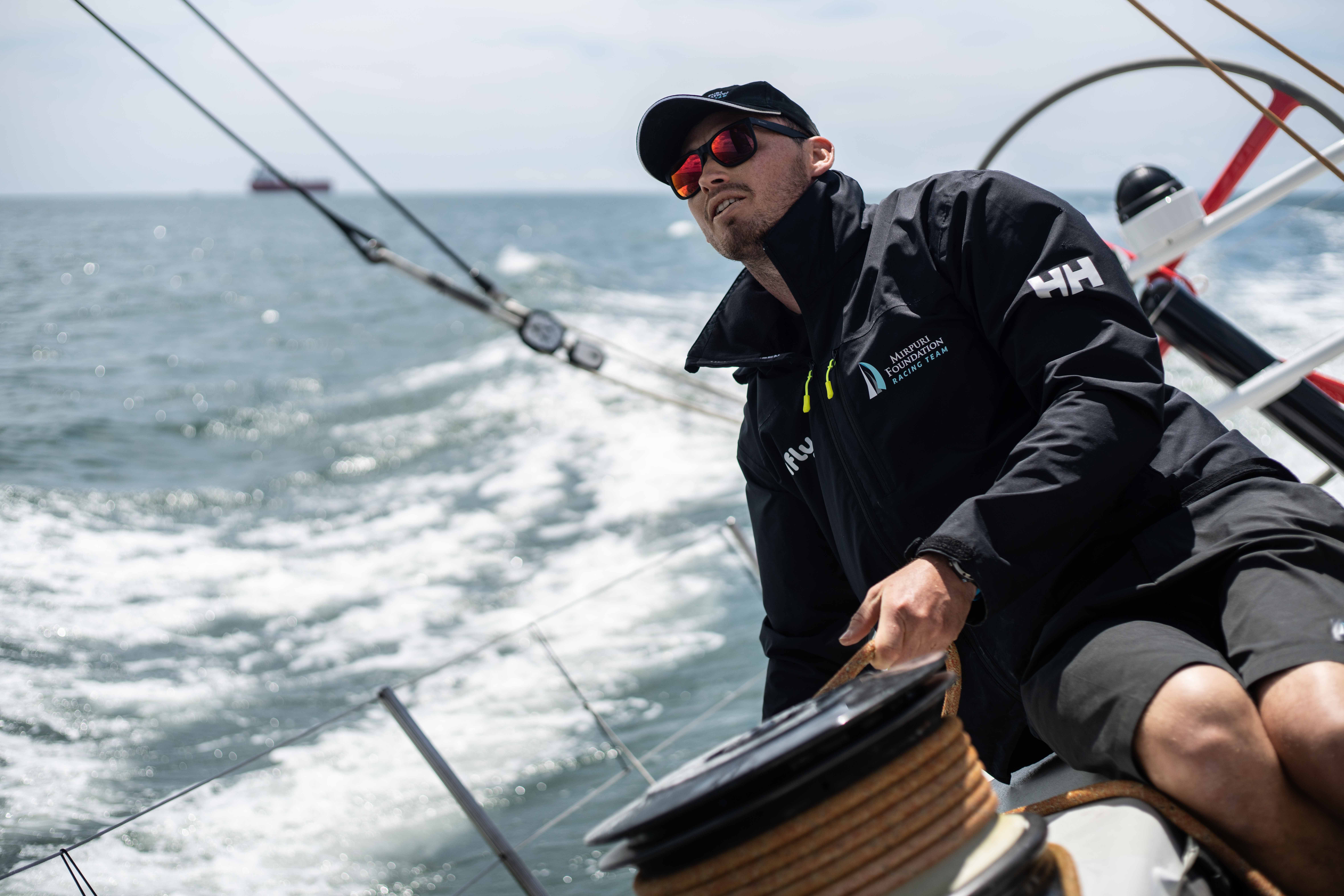 Jack Bouttell will take over the role of skipper for the Mirpuri Foundation Racing Team.

A previous Volvo Ocean Race winner in 2017-18, Jack Bouttell has been an integral part of the Mirpuri Foundation Racing Team since its inception in 2019. Bouttell held the pivotal role of watch captain during the team’s victory in the 2021 The Ocean Race Europe, and his step up to the role of skipper will be the first time he leads a team at the helm of a VO65.

Jack Bouttell brings a career of ocean racing experience to the helm of the Racing for the Planet VO65. In 2016 Bouttell joined the crew of the mighty Spindrift 2, the largest racing trimaran in the world at 120 feet, and won the Québec–Saint-Malo, setting a new race record.

The 31-year-old, who was born in Australia and moved to Oxford, England at the age of 14, then joined the Dongfeng Race Team and raced in the 2016 Sydney Hobart with Charles Caudrelier, claiming third overall. He again raced with Dongfeng Race Team for the 2017-18 Volvo Ocean Race, resulting in the team claiming victory in the round the world race.

In 2018 and 2019 Jack returned to the maxi trimaran Spindrift 2 for two attempts at the Jules Verne Trophy, before competing solo in his fourth Solitaire du Figaro campaign in 2020. In the same year, he was also a member of the Mirpuri Foundation Racing Team’s winning crew in two regattas on board their Racing For The Planet VO65. In 2021 Bouttell sailed as watch-captain when the Mirpuri Foundation Racing Team won the inaugural The Ocean Race Europe.

Jack Bouttell said, “I’m honoured to have been asked to skipper this amazing team that has been a big part of my life since 2019. I think everything I’ve done in my career up to this point has prepared me for this opportunity, and I’m looking forward to the new challenge when we go racing in The Atlantic Challenge this July.”

The inaugural – Atlantic Challenge – A Thousand Mile Race – is the headline event of the 10-day Mirpuri Foundation Sailing Trophy taking place in just over two months and will see teams racing from Cascais, Portugal, round Porto Santo Island in Madeira and back to Cascais.

The addition of this ocean racing event to the third edition of the international regatta schedule is designed to challenge the best offshore sailors and fastest boats to a test of endurance across several days of racing.

The line honours winner will be awarded the coveted Mirpuri Foundation Sailing Trophy in the fully plastic-free event founded to raise awareness and vital funds for marine conservation projects worldwide.

As part of the 10-day festival of sailing, this year’s edition sees the most classes racing across multiple events, including Maxi Yachts, VO65s, NHC, ORC, IRC, Multihulls, Classics, 6m, SB20, and Optimists.

Chairman of the Mirpuri Foundation and founder of its racing team, Paulo Mirpuri said, “Jack has been part of the family since day one. We are delighted to see him take the step up to skipper onboard our VO65 Racing for the Planet and look forward to seeing him take the team forward.”

Team Manager Bruno Dubois describes Bouttell as having experience that belies his years and one of the best young talents yet to skipper a VO65.

Bruno Dubois said, “Jack has worked his way from the ground up in professional offshore sailing and his move to the role of skipper is the next logical step in his career. I have worked with Jack for many years and seen the ease with which he’s taken on more responsibility. I am confident he is up to this challenge and look forward to seeing how he embraces his new role as the skipper.”

A new face bolstering the team for the ‘The Atlantic Challenge, A Thousand Mile Race’ is Volvo Ocean Race veteran Stu Bannatyne (51). Having competed in the grueling round the world race eight times, taking victory on a record four occasions, the New Zealander is one of the world’s most prolific ocean racers and most successful sailor in the almost 50-year history of The Ocean Race.

Since claiming his fourth round the world win in 2017-18, Stu has been working across the globe on various high-profile campaigns, including wins in the 2021 Transpac and 2022 Caribbean 600 on board the PAC52 Warrior Won.

Stu Bannatyne said, “I sailed with Jack when we won the Volvo Ocean Race in 2017-18 and I’m really looking forward to getting back onboard the VO65 with him. He’s a really calm and levelheaded guy and great all-round sailor, he’s got all the right qualities to be a good skipper. The ‘Thousand Mile Race’ is going to be great sailing and I can’t wait to be back onboard sailing these amazing boats fast again.”

Of Stu Bannatyne, Dubois said, “There are very few sailors in the world with a pedigree like Stu. His experience and reputation as a fierce competitor will bring an extra dimension to the team. We are honoured to have a legend like Stu join our team, and we look forward to seeing the impact his presence has on board Racing for the Planet.”

Schwartz, who will perform the navigator role, has sailed with Jack Bouttell on board the 120-foot maxi trimaran Spindrift during their attempt at the non-stop round the world speed record in the Jules Verne Trophy.

During the 2017-18 Volvo Ocean Race Ben worked on the shore crew servicing the VO65 of the winning Dongfeng Race Team, which was rebranded as the Mirpuri Foundation Racing Team boat, Racing for the Planet.

In 2019 Ben became the first rookie to ever win the Elite Offshore French Championship, and in 2020, he won the Eurosaf Mixed Offshore European Championship.

Skipper Jack Bouttell said, “Ben and I are great friends, and our careers have evolved almost side by side. We’ve sailed thousands of miles together and we know exactly how each other sails. To have his knowledge of our VO65 will be very valuable, and I’m looking forward to taking on this new challenge with Ben on board.”

Australian sailor Alex Gough has already racked up a full lap of the planet in the 2017-18 Volvo Ocean Race onboard the VO65 Scallywag, the boat that won leg 3 of the race from Melbourne to Hong Kong.

Jack said of Alex, “I’ve known Alex for a while, and as a fellow Australian, I recognise an attitude in him that reminds me of my career at the same stage. He’s a great all-rounder with solid experience who I know will slot easily into his role on board.”

The three new members will bolster the crew who won the inaugural The Ocean Race Europe in June 2021. The returning crew members include Portuguese sailors Bernardo Freitas and Mariana Lobato, the only female sailor on the team. From the United Kingdom, Olly Young and Rob Bunce will sail again, while Willy Altadill of Spain will share the role of watch captain with Stu Bannatyne.

Paulo Mirpuri said, “After The Ocean Race Europe victory, I am looking forward to seeing what our international crew can do in our home event again this year. While a victory is important for the team, doing well also brings vital attention to our critical climate message, ‘Racing for the Planet’.”

For more information on the team, see: http://mirpuriracingteam.com

For more information on the event, see: http://mirpurisailingtrophy.com