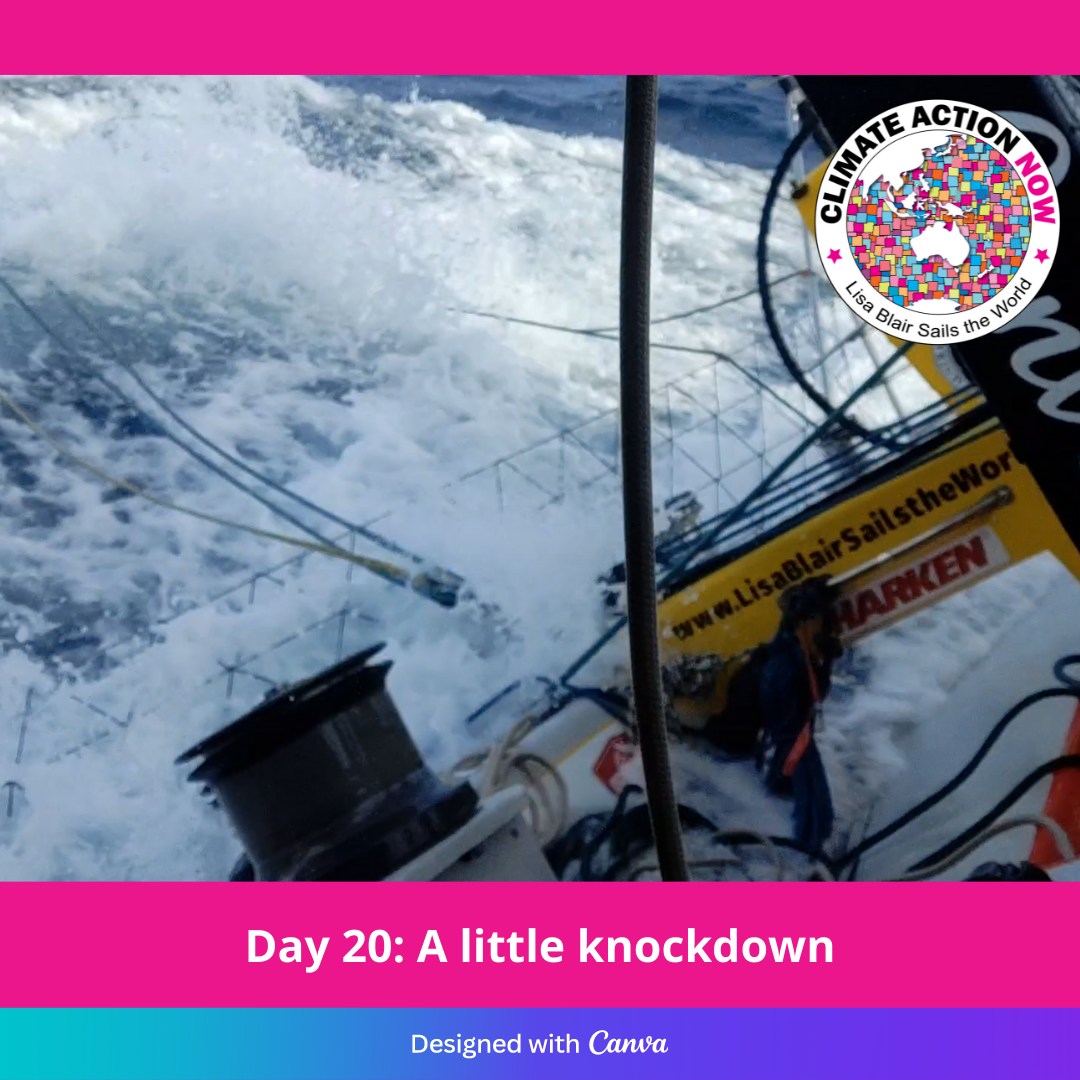 Just under three weeks ago, on Monday February 21, Australian sailor Lisa Blair set sail from Albany, WA in a second attempt to sail solo, non-stop, around Antarctica in record time aboard her yacht ‘Climate Action Now’.

Well this morning I forced myself to get up a bit earlier than I have been even though I am still not getting to bed until late.  I had a whole day of jobs planned and all the best intentions on doing them, so I wanted to get a jump on it before the expected wind shift.

After a hot breakfast I started with job number 1, sponging out the bilges. The one right under the navigation station was the first on the list.  It is this very small and super awkward space and as I was in 15 knots of wind in a three-metre swell, we were rolling around lots, making the job ten times harder.  There wasn’t even that much water in there, but it was so hard to reach that it took me an hour to get it out.

When I finally finished with that bilge I checked on the wind. Most of the night the winds were blowing in from the NW but I was waiting for a shift in the winds to the SW and when the shift occurs I would need to put a gybe in (changing direction with the winds behind me).  As I watched I could see the winds start to come around from the NW to WNW to W and then over to WSW. I was also needing to alter the boat’s course to ensure that we didn’t gybe accidentally.

I got geared up in my Musto gear wearing my MPX salopetts and Dubarry boots before climbing on deck to quickly put in a gybe.  By the time I had climbed out of the hatch and took stock I could instantly tell that the winds were stronger than before.  I was suddenly seeing 22 knots instead of the 14 knots I had been watching for the last few hours.

I decided that I need to change my jib over first because I was still flying the light air jib and the winds were no longer light any more.  I set it up and furled away the sail on the Pro Furler supplied by Witchard Pacific and by the time this was done I was looking at a blue sky above me from the grey of this morning.  I could see a smudge of cloud on the horizon and new it wasn’t going to last, but I was so excited about the feel of the sun on my face that I just focused on that.

I was also still flying the whole of the mainsail but I decided that because I was sailing downwind so my boat speed was taking some of the bight out of the wind that I was safe enough to gybe with the full main, even though it was borderline on the wind strengths.  I set the boat up and finally after nearly 20 minutes I had completed the gybe. and looked up again only to see that the smug of cloud in the distance had now suddenly caught up to me and the texture of the ocean around me started to change.

My B & G wind instruments were still showing 22 knots but as I watched you could see the winds coming, the water was suddenly filled with white caps and the tops of the waves were starting to get blown away.  It was like a line in the water coming closer and with it came a whole array of bird life all riding the pressure wave on the edge of this wind shift. I looked at the instruments again and as I watched it went from 22, to 25, to 28, to 32 and then I was suddenly seeing winds at 37 knots.  I needed to shorten my mainsail asap before all this wind blew it out.

I decided that instead of just putting one reef in I would go directly to reef two as this was expected to stay until around midnight tonight.  After it was all done the cockpit of the boat looked like a snake pit with the aftermath and it took me nearly another hr to tidy up all the lines.  By this stage my hands were on fire from the cold.  I had originally gone on deck to put in a quick gybe, I wasn’t planning on being out in the freezing cold for two hours.  I was also feeling the exhaustion of so many sail changes and my arms felt a little like jelly from winching and grinding for so long.

I climbed inside and flopped in a heap for a while before needing to rouse myself to go and change the micro plastic sample over. I then needed to refuel my system, so I made some lunch.  I changed the micro plastic filters over for the second time today before needing to go on deck again and put the third reef in the main sail.  The seas had built up to nearly four metres, but they were not the normal type of large rolling Southern Ocean waves, these were short and sharp having been created from the wind blowing over the ocean rather than from the effects of some distant storm, so Climate Action Now had been having a blast surfing the waves.

Just as I was climbing back through the hatch from changing the micro plastic samples over, I felt us catch a fast wave. I checked the B & G Zeus display by going to trip, and it said that the top speed of today was 22.5 knots.  That is a great little surf.  The most I have ever gotten Climate Action Now to go is 27.5 knots while I was napping in my bunk during my last Antarctica record, I am always trying to beat that.

But the fast speeds combined with the short choppy seas meant we were getting knocked down regularly and broaching all over the place, so I knew I needed to reduce the sail area even more.  So geared up in my Musto gear again and armed with a waterproof jacket this time around, I was back on deck and setting the third reef in the mainsail just as the light faded with the sunset. So much for my big jobs day. I honestly don’t know where the time goes but some days I blink and the whole day is gone…

The winds have started to slow now, but not quite enough to change the sails just yet, so it is time for bed until I can. I would again like to take a moment to thank todays totally awesome degree sponsors.

173 East – d’Albora Marinas, Martha Cove, Mornington VIC – Thank you to Australia’s best marina for your support.
174 East – Thank you to Joanne Hansen for your incredible sponsorship and all the tireless hours you have spent helping me to reach the start line.
176 East – Thank you to Kostas Sarneckis for being a wonderful human and jumping right aboard to support when you read my call for support the other week.  I really appreciate it.

If you are interested in getting your own degree or maybe a few friends together to support this project than you can find out more by clicking on the 360 degree page.