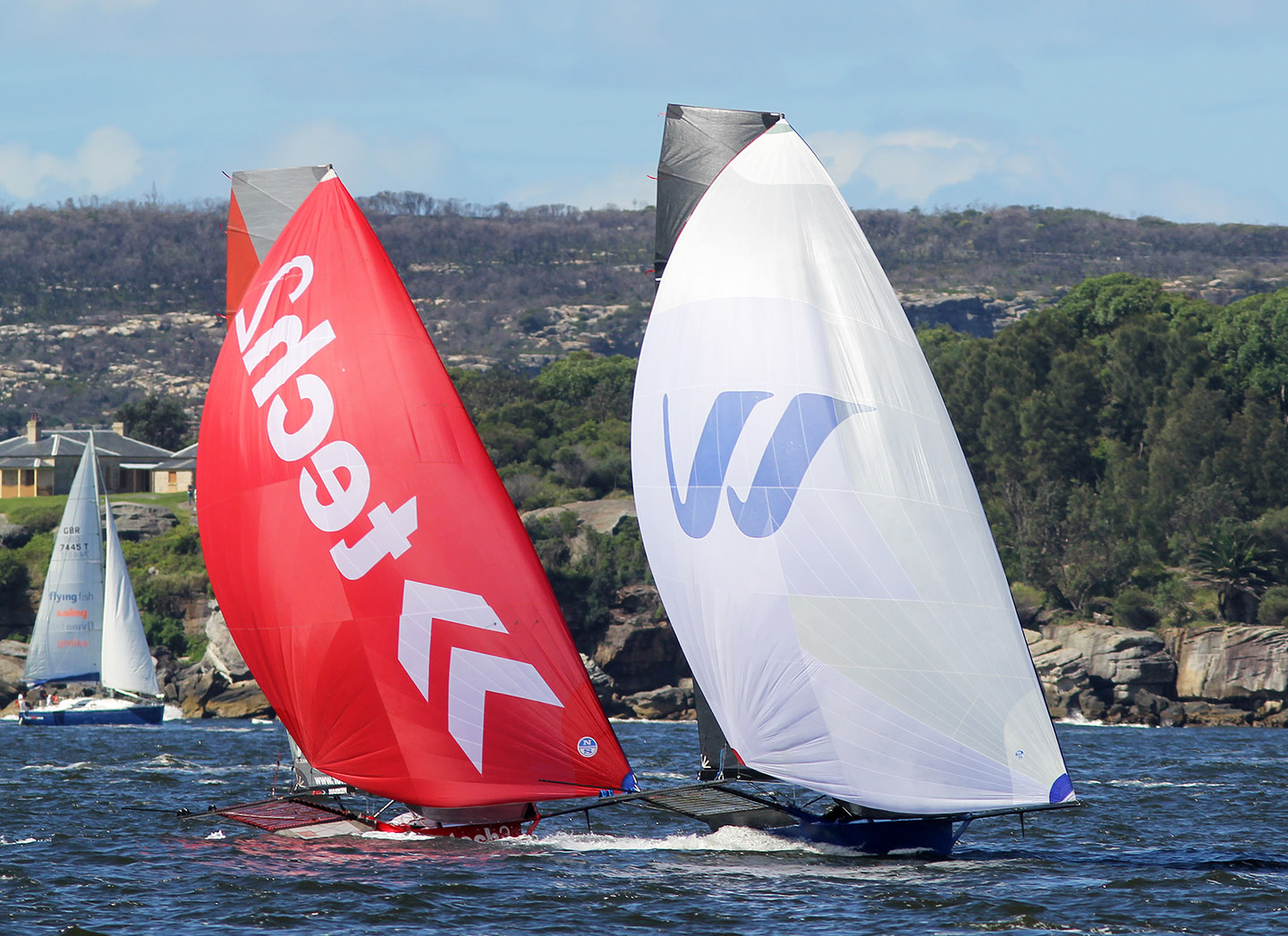 The Andoo team of Seve Jarvin, Matt Stenta and Sam Newton wrapped up the 2022 JJ Giltinan 18ft Skiff Championship with another brilliant win in Race 8 of the Championship, which was sailed on Sydney Harbour today.

Andoo’s victory today was the sixth from the eight races sailed so far and, along with her two second placings in the other two races, has an unbeatable lead with just one more race to be sailed tomorrow.

This is an unprecedented eighth victory for Jarvin and a seventh for Newton, who sailed Gotta Love it Seven with Scott Babbage to a sixth title in 2014, to equal their coach, Iain Murray’s record. Murray, though, scored consecutive titles.

The overall points standing after today’s race has Andoo on eight points (after discard), with the next closest Tech2 (Jack Macartney, Charlie Wyatt and Lewis Brake) on 19 points. Even when Andoo includes her worst score so far, the team’s total is only 10 points.

After a tough battle with Tech2, particularly over the first lap, Andoo led for most of the course before crossing the finish line 54s ahead of Tech2 with Noakesailing (Sean Langman, Ed Powys and Josh Porebski) a further 3m10 back in third place.

After Andoo on eight points and Tech2 on 19 points, Rag & Famish Hotel (Harry Price) is in third place on 35 points, followed by Noakesailing on 42, Lazarus Capital Partners on 46 and defending Smeg Michael Coxon) team on 55 points.

On the first windward beat to the Beashel Buoy, the fleet chose a variety of courses in the 10-16 knots north-easterly wind with Lazarus Capital Partners, Finport Finance, Smeg and Noakesailing prominent behind Andoo and Tech2.

At the windward mark, Andoo led Tech2 by just four boat lengths, which was the forerunner of a brilliant downwind battle to the wing mark off the southern end of Shark Island then the bottom mark off Clark Island, with just a few boat lengths separating the two teams.

The pair had opened up a big margin over the chasers which were headed by Finport Finance, Smeg, and a group including Noakesailing, Shaw and Partners and Lazarus Capital Partners.

WA’s Black Swan (Luke Parkinson) was the best of the visiting teams, in eighth place.

On the following beat back to the Beashel Buoy, Andoo was dominant as the champion team opened up a break of one minute over Tech2 and from that point the outcome looked obvious.

Over the last lap of the course, Tech2 reduced Andoo’s lead back to 20s as the boats headed for home, but once again Andoo extended the margin to the final 54s.

Despite having to finish behind the winner, Tech2’s performance was enough to take out the handicap section.

The final race of the 2022 JJ Giltinan Championship will be sailed Sunday.

Spectators can follow the racing on board the spectator ferry. Booking is essential at:
http://www.18footers.com.au/18-footers-sailing/spectator-ferry/

For those unable to make it out onto the water, Sail Media’s live streaming is available at: http://www.18footers.com by clicking on the ’18 Footers TV’ link.