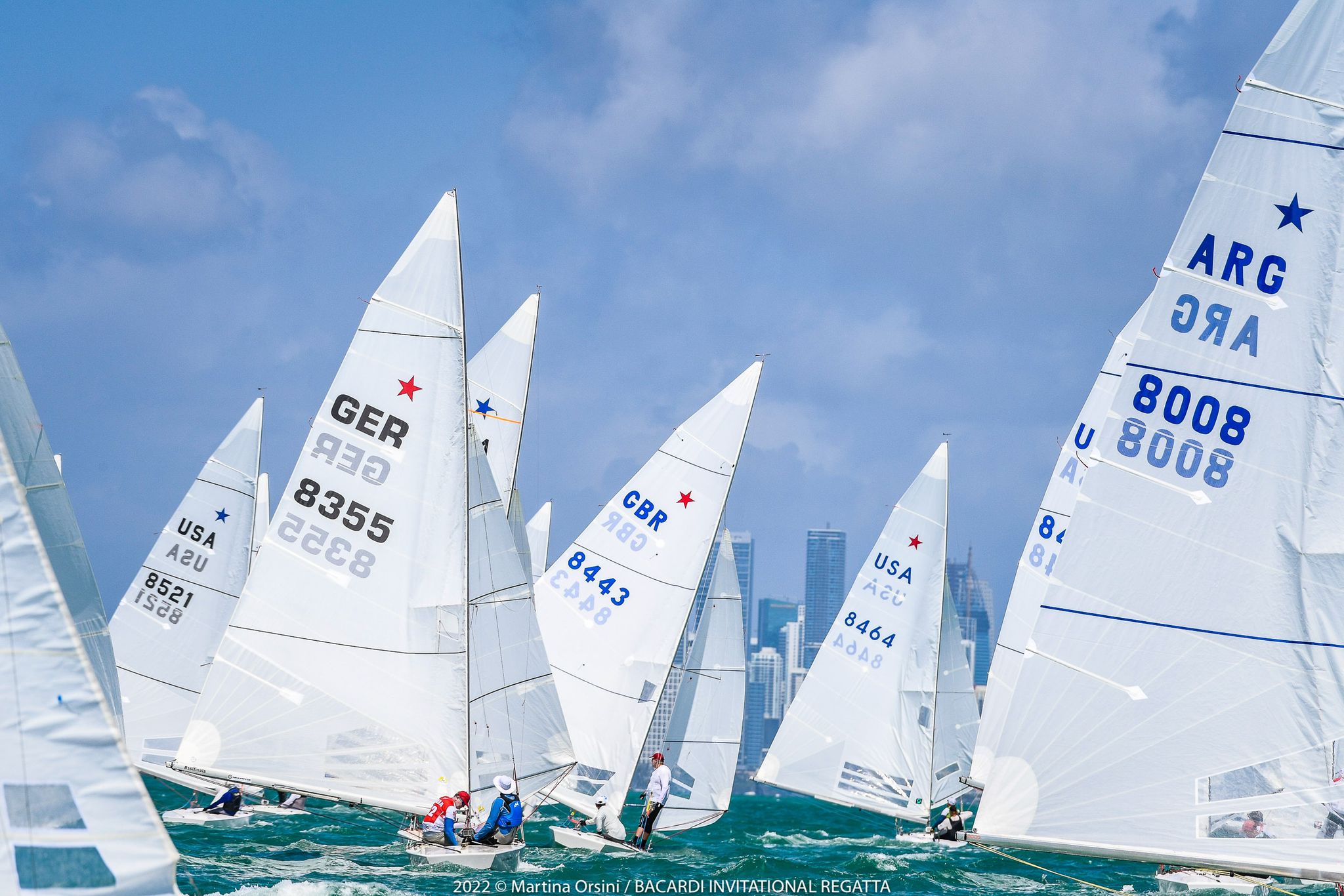 On the penultimate day of racing at the Bacardi Cup and Bacardi Cup Invitational Regatta, Miami turned on another day of exhilarating sailing, with a consistent southerly breeze of 12-17 knots across the race courses.

Teams will be looking at changes to race strategy, as an approaching weather front is forecast to up the wind pressure on Saturday, March 12. Racing gets underway at 1100 hours and the Race Committee is expecting to complete the full race program completed before the weather system comes through.

Star Class
The Star Class fleet enjoyed another spectacular day in picture perfect conditions, with the fleet spread along the length of the line for their nine nautical mile race in 12-15 knots of due south breeze

Mateusz Kusznierewicz (POL) and Bruno Prada (BRA) again pulled the proverbial rabbit out of the hat, as they were spilled off the leading boats at the first windward mark but again dug deep to put on another masterclass and claw back to finish in 2nd.

An invincible performance from Kusznierewicz/Prada rewards them with mathematical victory at the 95th Bacardi Cup with a race to spare. This punishingly accurate partnership makes it three in a row as they convincingly defend their 2021 and 2020 Bacardi Cup titles.

Behind the leaders, the USA’s Eric Doyle/Payson Infelise and Italy’s Diego Negri/Sergio Lambertenghi have secured enough of a points margin to make it a two-way battle for 2nd and 3rd overall. Both teams are former Bacardi Cup champions, with the Americans winning in 2019 and the Italians in 2018. Negri is also the reigning Star Class World Champion.

Disappointment for Jack Jennings/Pedro Trouche who switched from their race winning show to a 14th place score, which takes them out of podium contention.

In this 58-boat fleet, packed with twelve Star World Champions and eleven Bacardi Cup Champions it is tough. There are so many good sailors it is incredibly hard to break into the top 10 in the fleet, with numerous teams who can win on any one day.

Making the break to the front today, were Jørgen Schönherr (DEN) and Markus Koy (GER) who earned their lead at the first mark, holding on to the win. Schönherr was forced off the race track on Tuesday due to a foot injury, and despite limping ashore is hiking and fighting as hard as ever on the water.

“We started in the middle of the line and had a few good shifts on the first beat, and downwind we had more or less the same pace as the strong guys behind us,” explained Schönherr, a two-time World Champion in the Dragon and FD. “I think the training we have been doing here in Miami has helped our performance downwind. After coming from the cold north, it’s so nice to be here and so nice to spend some weeks here in the winter.”

J/70 Class
2021 BCIR J/70 champion Travis Odenbach on ‘Very Odd’, headlined the day’s opening race after his team established a tidy lead by the first mark and settled into the finish. They couldn’t repeat their form though, and it was a British controlled race track for the rest of the day.

After a disappointing 17th place, series leader Paul Ward on ‘Eat Sleep J Repeat’ overhauled the fleet to own the second race of the day, followed up with a 3rd and lead by 7 points over second placed Daniel Goldberg’s ‘Bazinga!’.

Up next for a win was Charles Thompson’s British line-up on ‘Brutus III’, who seized the final race and advance to 3rd overall.

“It is a real privilege to be back here in Miami sailing against the best teams in the world, with a great team from the UK,” said Thompson as he gave credit to his star-studded crew of the 2017 Nara 17 world champion, Ben Saxton; two-time world champion in the SB20 and SB3 Craig Burlton and Twiggy, aka two-time 470 Olympian Chris Grube.

“We had a great day today, I felt we improved throughout the day. We got the measure of the wind which is a tough wind for us because we are a light boat. We are 20-30kg lighter than most, so it is tough upwind, we have to hang in there. However, if we get that right and get to the top mark, downwind we are pretty fast,” Thompson said.

“We had a great result in the last race and came in first, which is incredibly pleasing for me on my boat, but the whole team enjoyed it immensely, it was a great day.”

Three races are scheduled on Saturday with the top three boats likely in their own battle, having established a points safety net over the chasing pack.

Melges 24 Class
The second day of racing kicked off at 1100 hours for the Melges 24 fleet with three races completed in a stunning 13-17 knot breeze.

Going bold was 2021 and 2020 BCIR champion Bora Gulari on ‘Mavi’, who is back where he belongs after two race wins and a discard of yesterday’s UFD penalty pitch him into the lead, from 10th at the start of the day.

“It went well,” said ‘Mavi’ crew Michael Menninger. “We had decent starts, just kept it really tight and had really good speed downwind. I think most legs we passed boats and we just tried to sail really well. We had good crew work and team work, and had a good day, so it feels good.”

Gulari is on an 11-point tiebreak with 2nd placed Brian Porter on ‘Full Throttle’, who led going into the day, with both owning a 10-point advantage over the two teams on tiebreak in 3rd and 4th, Drew Freides on ‘Pacific Yankee’ and Harry Melges IV’s ‘Zenda Express’.

Leading the Corinthian teams in 11th overall is ‘Team RRH’ from Norway, who have Herman Horn-Johannessen, the 2000 Olympic bronze medallist in the Soling Class, onboard.

Three races are schedule on Saturday’s final day of racing, getting underway at 1100 hrs for the Melges 24.

Viper 640 Class
Fast paced racing with lots of position changes in the downwind legs kept the Viper 640 fleet on a non-stop race chase. Three races, three different winners and a new team on top of the leader board, as Peter Ill’s ‘Caterpillar’ takes control.

“We really enjoyed the sailing, great breeze, great races,” commented Peter Ill, whose team now lead the Viper 640 Class from 1,3,2 scores. “We had a fun day. It is such a great venue to sail that we love coming down here to race. We had some good competition and back and forth racing on all of the races. Challenging, but a whole lot of fun.

VX One Class
An exciting day of tight mark roundings, trading places, capsizes and action throughout the day’s three races showcased the mix of talent in the VX One fleet.

Jerry Callahan’s ‘Magic Bus’ left the fleet for dust in the opening race, with Kevin Northrop sealing the second win and series leader Austin Powers on ‘Tudo Bern’ consolidated their lead with the final win of the day.

The best scorecard of the day – 2,1,3 – went to Kevin Northrop, who edges up the leader board to 2nd overall, just 2 points off the leader.

“It was beautiful sailing conditions, we had a really nice day with three top 3 finishes,” said Northrop. “Miami delivered what we all came here for, which was 15-18, blue water, consistent conditions, great race committee, fun sailing – really glad to be here.

“We stick to our game plan, which is to get good, conservative, consistent starts, get to the weather mark in the top 3 and try to move forward from there.”

Points are all open to decide who will be on the podium tomorrow.

69F Class
‘Clean Sailors Youth Racing’ delivered a walk over, dominating with six wins from six races to move into first overall on a 7-point advantage. ‘Miami Yacht Club’ is knocked off the series lead to sit on tiebreak with ‘Sail America’.

Despite not being out front, ‘Sail America’ did claim the jersey for pace, racking up the top speed of 29.3 knots.

“Today was an awesome day out on the water,” said Gavin Ball. ”Today we hit 29.3 knots, which is the fastest I have done sailing, which is pretty dang sick!”