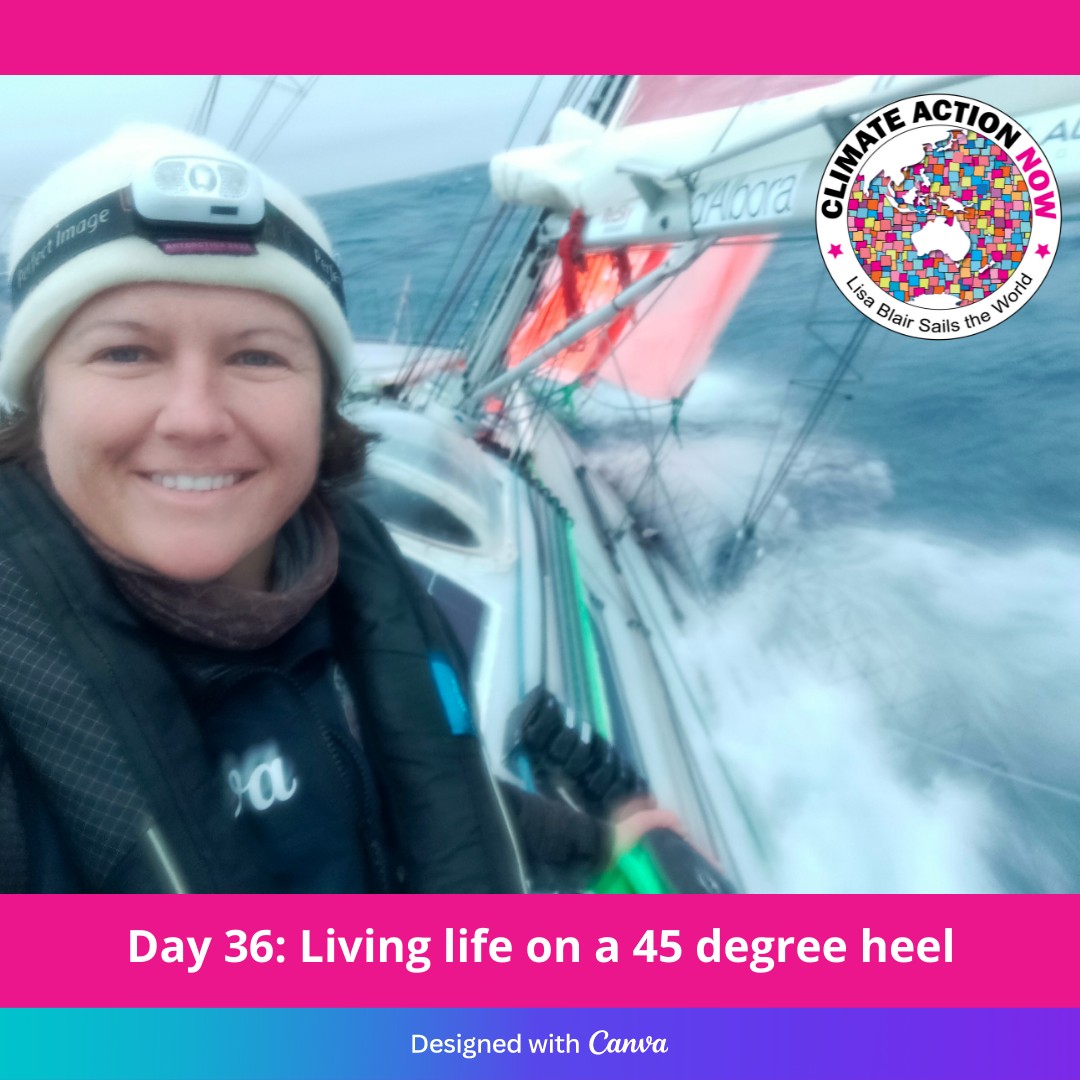 In her latest blog post, Blair makes sail changes after the wind changes to a NNE direction.

Well today I once again woke feeling zombified after another night of bad sleep. I had a full day ahead of me so as much as I wanted to sleep it wasn’t an option. The winds had now shifted from the SW to the NW and were slowly creeping around to the NNE and I needed to adjust my sails to suit.

This meant that instead of me sailing with the wind and being on a broad reach point of sail where the sails are loose and eased out as far as they can go, I now needed to winch everything on as I was now going to be sailing close hauled.  Initially the winds were still blowing at 20 knots but throughout the day they started to build and before too long I needed to put the first reef in the mainsail shortening the sail to suit the winds and wind angles.

I now had the full J2 out and the no 1 reef in the mainsail but Climate Action Now was not happy. While we were not rounding up with the wind overpowering us, the whole of the starboard side of the boat was submerged because we were being pushed almost sideways from the wind. It was making doing the simplest of things hard, like going to the toilet or simply moving about the cabin felt like a gym workout. Every time we would strike out on a wave, Climate Action Now would slap down in the trough you needed to hold on very tight to avoid being tossed across the cabin.

Climbing out the main companionway hatch was a laugh. This hatch is only 50 x 50 cm and is my main access-way from the decks to the cabin. I have another hatch in the sail locker, but this remains closed while I am at sea. So now that Climate Action Now is leaning over at 45-50 degrees and bashing through the swell, I would need to wait for a gap in the waves, dive through the hatch and wiggle, wiggle, wiggle before grabbing the top handrail and doing a half chin-up at the same time I twist and lift my legs through. Normally I would need to rest after just exiting the boat – chin-ups aren’t really my thing…

So, life was getting more difficult the stronger the winds were getting, but I had a meeting scheduled with my sponsors Canva via a zoom call and then had a funny zoom call with my Mum and Sister. It’s, amazing that I can not only call family and friends from the boat but to have a zoom call from the Southern Ocean really is something. The Vessel Link that was supplied by Pivotel does just that. While I am feeling tired it was really nice to just laugh with family and friends, it really lifted my spirits.

It was quite entertaining to have my Microsoft Surface book 3 laptop, which is my boat computer, siting flat on the navigation station, while I was sitting level with the angle of heal. To those on the call it looked like I was almost laying down because of how the angles worked, we all had a good laugh about it but as I was on the calls the conditions continued to get worse and I needed to go on deck again and put in the second reef.

The winds were 25 knots true at that time however the apparent winds (this is the actual winds we are feeling and normally you add your boat speed to the True winds to get a number) were coming through at 30 knots, or just above, and Climate Action Now wasn’t having any of it.  She wasn’t happy, and our speed reflected that.

We were going more sideways than forward for a time there and I spent ages on deck adjusting the sail trim and hand steering to try to get a better than four knots boat speed, but it wasn’t going to happen. We were healing over so far that we were sliding sideways (this slide is called the leeway).

The only way to try to prevent the leeway is to try to keep more of the boat upright because this allows the keel and rudder to be deeper in the water and have more of a counter effect to the winds trying to blow you sideways. It used to be fun when I was sailing for a short time when I first started sailing, but now it is my least favourite point of sail. Especially if I am trying to sleep and keep falling out of the bunk, or I am trying to cook and everything keeps trying to jump off the counter, so I can’t wait for those winds to come around.

I was on deck trying to decide if I should put the third reef in when the winds started to build towards 35 knots. We were now getting overpowered and starting to round up into the winds.

A round up occurs when you heel over too far, and the rudder stops having an effect because it isn’t deep enough in the water anymore due to how much heel you have on and so the boat will automatically take the path of least resistance. It will turn rather aggressively up directly into the wind causing the boat to almost stop and all the sails to flap. They can be daunting but no real damage is done however they are a clear indication that you have too much sail up, so it was time to get in the jib before I broke it.

Remember that 35 knots of wind in the Southern Ocean feels a lot like 50 knots of wind in Sydney Harbour, because it is more dense because of the higher water content. I really didn’t want my jib to flap as I winched it in as the whip effect of the sail into the wind would likely cause some breaking of the stitching and weakens the sail overall, so to avoid this I ease out the sail that I am packing away in small little sections and winch it away as I go, this is a much slower process but it does protect the sail.

After furling away the No 2 jib I found that we were still overpowered with the mainsail and 2 reefs and a storm jib, so I arranged to put the third reef in the mainsail just to ease up the pressure of everything. Almost as soon as I had done so the winds eased a little and we were blobbing around going nowhere fast. I was feeling so frustrated with the conditions and so ready to get back to surfing waves and getting those high boat speed numbers.

I finally got below, soaked because I went on deck in my slightly waterproof Musto Mid layers and not my Musto waterproof outer layer. I was starting to feel the cold, so I went below and made a freeze-dried meal that was a coconut curry. It was delicious and did the job of giving me some more energy. I have now spent the rest of the night in and out of the boat tweaking the sails, as there is either too much wind or not enough. I think I am going to have to call it and try for some sleep as the day has really caught up to me.

Before I go, I would like to thank the following wonderful degree sponsor.

106 West – d’Albora Marinas – Martha Cove, Mornington Vic – Thank you to d’Albora Marinas for your amazing support, this marina is located just outside Port Philip Bay and is another great marina to visit.

Thanks everyone again for your support and for following along on the journey, goodnight, all.