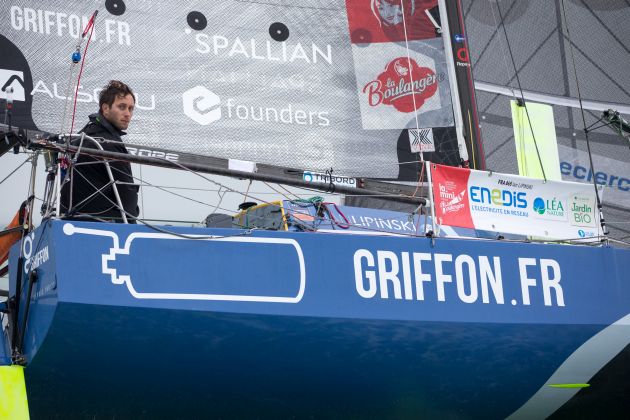 Whilst the fleet carves out a route between the latest squalls in what is a very shifty trade wind, each of the skippers has his or her own method of keeping up morale and making the most of this Mini-Transat La Boulangère adventure, right the way to the finish.

As Ian Lipinski (Griffon.fr) passes the milestone of 500 miles to go, it would seem that the firm favourite of this 2017 edition of the Mini-Transat La Boulangère has the race in the bag. Barring incident, there is virtually no hope now of Jörg Riechers (Lilienthal) and Simon Koster (Eight Cube Sersa) catching up with the undisputed leader of this race. Behind this trio, Andrea Fornaro (Sideral) will still have to keep a close eye on Keni Piperol (Région Guadeloupe), the latter firing on all cylinders at the idea of securing fifth place in this leg, which would have major implications in terms of the overall ranking.

Further back, if there is one skipper for whom the ranking must seem anecdotal, it’s Aurélien Poisson (TeamWork), who has learned at sea of the birth of his daughter. With a return to the country of his youth, plus the arrival of a new generation, emotions must be riding high for him right now.

In the production boat category, Erwan Le Draoulec (Emile Henry), still as quick as ever, is stretching away at the front of the fleet. However, the situation is more complicated for Clarisse Crémer (TBS), who has seen the Irish sailor Tom Dolan (offshoresailing.fr) come right back into contention for the top spot. Ultimately, it is Benoît Sineau (Cachaça) who may well come up trumps. Indeed, this business manager and amateur sailor, could make a clean sweep of the prizes by accessing the podium for the overall ranking after originally setting himself the objective of making it into the top 10.

Dealing with the solitude

Not everyone is lucky enough to be celebrating a happy event at sea. Indeed, some sailors have preferred to launch a pre-emptive attack on any dips in morale. In this way, Marta Guemes (Artelia) has on-board nearly nine hours of short personal audio messages to discover each day. A great way to combat the blues. Equally, as evidenced in the first leg, we can well imagine that the VHF is ensuring a degree of sanity amongst the little community of Mini sailors sailing close to the great circle route.

Others have opted to actually make headway alongside each other, including Jérôme Lhermitte (Noveum), Luc Giros (Cabinet Rivault Nineuil – Enedis) and Valentin Massu (Espoir Mini-Transat), at the risk of gradually switching to cruising mode of course. Sometimes it’s the crews on the support boats who provide a little needed boost given the lack of outside contact. Other times, it may come directly from the competitors. Arnaud Etchandy (Ipar Hego), prompted by the sudden need to talk, has managed to find an attentive ear among the crew of a support boat, as well as Pierre Revol (Maribambelle).

Others would really like to pass on their little pearl of wisdom to fellow racers in difficulty. The technical issues lamented by Elodie Pédron (Manu Poki et les Biotechs) triggered a whole host of reactions across the social networks, with a vast array of very relevant advice. Unfortunately, Elodie cannot benefit from this of course, but given her average speed over the past twenty-four hours (in excess of six knots), it would seem that the young skipper is digging deep into her resources.