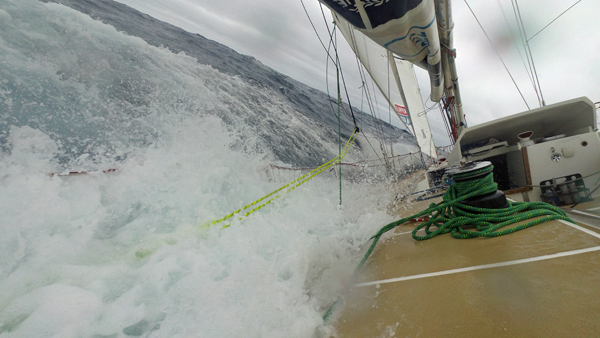 A waiting game has descended over the Clipper Race fleet, with all the teams waiting on the wind to decide their fates heading into the second half of Race 3: The Dell Latitude Rugged Race to Fremantle, Australia.

PSP Logistics remains in the top spot on the leader board, and has a 33 nautical mile advantage on second placed Visit Seattle. But despite finally getting into some downward sailing yesterday, the overnight conditions have been tricky, as Skipper Matt Mitchell explains: “It’s been an up and down 24 hours on the whole, with wind from 20 knots to 2 knots. We are currently in the latter which is beyond frustrating as the competition is heating up. We are doing all we can to defend our position, however with the 2.5 knot boat speed that we have right now, we are nervously looking over our shoulders.”

Matt adds: “The wind is due to pick up over the course of the day, here's hoping our closest rivals don't pull away too much.”

Two of PSP Logistics’ closest rivals currently aren’t going anywhere fast, with the third and fourth placed Qingdao and GREAT Britain stuck in a wind hole. Qingdao Skipper Chris Kobusch reports: “Not quite what I associated with Southern Ocean sailing. We have been sitting here for the past three hours drifting with the current at 2 knots. Mainsail and Yankee flopping from side to side – every sailor’s dream. And at the moment, no end in sight.”

Qingdao and GREAT Britain will take some comfort from the forecast, with Clipper Race Meteorologist Simon Rowell reporting: “Whilst the southern group are all ridged out right now, the north-westerly should settle in at some stage in the next 12 to 24 hours.

“Looking ahead, the southern group should get the tail end of a front sometime tomorrow – 40 to 50 knots gusts – with the next one due on Thursday to be even stronger, with gusts to 60-70 knots.”

The boats to the north are also struggling with wind, though the issue remains direction, rather than strength. Race 3: The Dell Latitude Rugged Race is still a gruelling upwind slog for Sanya Serenity Coast, who has dropped from third to fifth. But with the westerlies scheduled to arrive for those in the north in the next 24 to 36 hours, Skipper Wendy Tuck says: “Hopefully soon we will have some of the sailing that we well and truly would like; downwind, beam on wind, any wind, as long as it’s not on the nose any more. We get little teasers and then the wind goes back to fully on the nose again. I can honestly say this is the longest stretch of upwind sailing in a row that I have done.”

Behind the closely packed trio of Unicef, Liverpool 2018, and Nasdaq, the ninth placed Dare To Lead is also struggling with another day of upwind sailing. Skipper Dale Smyth comments: “We are still close hauled so it doesn’t feel much different, but at least we are heading the right way and the wind should continue to go around over the next 24 hours. We will eventually, hopefully, be downwind.

“I could kick myself for not staying south early because that’s where I wanted to be, but we got forced north and we must now try to stay with the pack.”

Garmin is hot on Dare To Lead’s heels, trailing by less than one nautical mile in tenth place. Skipper Gaëtan Thomas says: “We are still in the Indian Ocean on a close angle, boat still heeled over, though the sea state is a bit better at least.

“On the competitive aspect, it is hard to see if we will make gains or loose in the next 36 to 48 hours. Just hoping to get the best of it. At least we stick to our option and our VMC (velocity made on course) is 100% so we are making progresses, about half way now.”

The spinnaker at least is in use on the eleventh placed HotelPlanner.com, and Skipper Conall Morrison reports: “We are making 11 knots right at Rottnest Island, 3225 nautical miles away, our waypoint off Freemantle, and the Code 1 (lightweight spinnaker) is flying well.

“Looking ahead, we have the Code 2 (mediumweight spinnaker) ready for when the wind increases and our navigating team is eagerly awaiting the morning forecast to make decisions on gybing south or holding course.”

To stay up to date with the Clipper Race fleet, keep an eye on the Race Viewer. All positions were correct at time of publishing.

Visit the Team Pages to read the Skipper Blogs in full, and to hear the latest news from the crew.