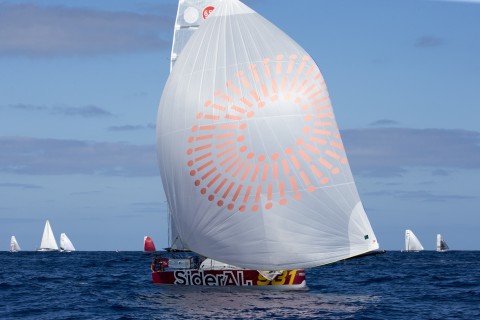 Ninety nine years ago, the armistice of 11 November 1918 heralded the end of the First World War, and on Saturday, its anniversary will play out on the great Atlantic chessboard, by way of a nod to history, as the battle continues rage among the Mini-Transat La Boulangere ranks.

Notably so at the front of the fleet, where Ian Lipinski (Griffon.fr) is proving impossible to budge from the top spot with his still comfortable lead just 650 miles from the finish.

Today, after 10 days at sea since the start of this second transatlantic leg, this imperturbable leader of the fleet must feel a hint of nervousness as the positions of the fleet are reported.

Ian can still count on a lead of over 100 miles, but the progress by Jorg Riechers (Lillienthal), his direct pursuer in terms of distance to the goal, must be causing him to bristle slightly in the disturbed trade wind system that requires the utmost vigilance at all times in order to get the best out of your machine.

The German sailor is really excelling at this particular game at the helm of the latest of these 6.50-metre racing bombs, gaining in power with every passing mile and day. Bolstered by his southerly trajectory and with a lateral separation of over 250 miles in relation to the leader, the German skipper is certainly not lowering his guard.

Battle of the ‘round noses’
Since yesterday, he has been gaining ground with every new position report, clawing back precious miles (around thirty in the last 24 hours). Surely an indication of his determination to hold out on the leader, even though the latter looks well on his way to victory barring any mechanical mishap.

Jorg is the first to acknowledge Ian’s supremacy: “Ian has dominated everything for the past two seasons and he handles his boat to perfection. It would be almost an injustice if he didn’t win this Mini-Transat,” he said on the pontoons back in La Rochelle.

Jorg is also the first and most well placed to cause the leader to wobble in this second leg. At the head of the fleet, one thing for sure is that the battle is set to intensify between these two sailors. Indeed, the duel between the 865, a David Raison design from 2014 taken all the way to the top by Ian Lipinski, and the 934 penned by Etienne Bertrand skippered by Jorg Riechers, augurs well for a battle royal between the ‘scow bows’ all the way to the finish.

The Pogo 3s take on a Figaro air
In the wake of this duo, a number of their fellow Mini sailors are embroiled in an equally tough competition with their closest rivals. Starting with Simon Koster (Eight Cube Sersa) and Andrea Fornaro (Sideral), who are respectively lying in third and fourth position among the prototypes.

With around just 40 miles between them, the battle is still very much on for the final place on the podium.

Among the production boats, the fight is also intensifying with the distances between the boats somewhat reminiscent of a Figaro fleet, which means the field is wide open for a shake-up of the hierarchy.

At the front of this group, in the kingdom of the Pogo 3s, which are trailing the first prototypes by just 200 miles, Erwan Le Draoulec (Emile Henry), with Clarisse Cremer (TBS) still in a very solid second place, must be keeping a close eye on the progress of Tanguy Le Bouroullec (Kerhis-Cerfrance) who’s gone on the attack on a southerly option.

In sixth position, the young skipper from north-west France is still reaping all the benefits of his offensive at a constant average speed of 10 knots over recent hours, which may well enable him to make big gains over the coming position reports.

Solidarity whatever happens…
For those less fortunate sailors, who are grappling with technical issues of varying degrees of severity, the latest news is rather reassuring. Joined by a support boat, Elodie Pedron (Manu Poki et les Biotechs), who has been dealing with the breakage of a rudder fitting, has indicated that she was able to get some good rest last night.

This Saturday, the sailor is carefully repairing her boat with every intention of finding a way of racking up favourable speeds once more.

As for Romain Bolzinger (Spicee.com), who is carving out his route under jury rig, he has been able to chat merrily with Luc Giros (Cabinet Rivault Nineuil-Enedis) and Vincent Massu (Challenge Espoir Mini-Transat), who have been accompanying him for a while now.

This is a great way of confirming that, solidarity wins whatever happens, even if the armistice doesn’t hold. It also shows that VHF remains the best weapon for boosting the morale of the troops when facing the immensity of the ocean along the various paths that lead to Le Marin.