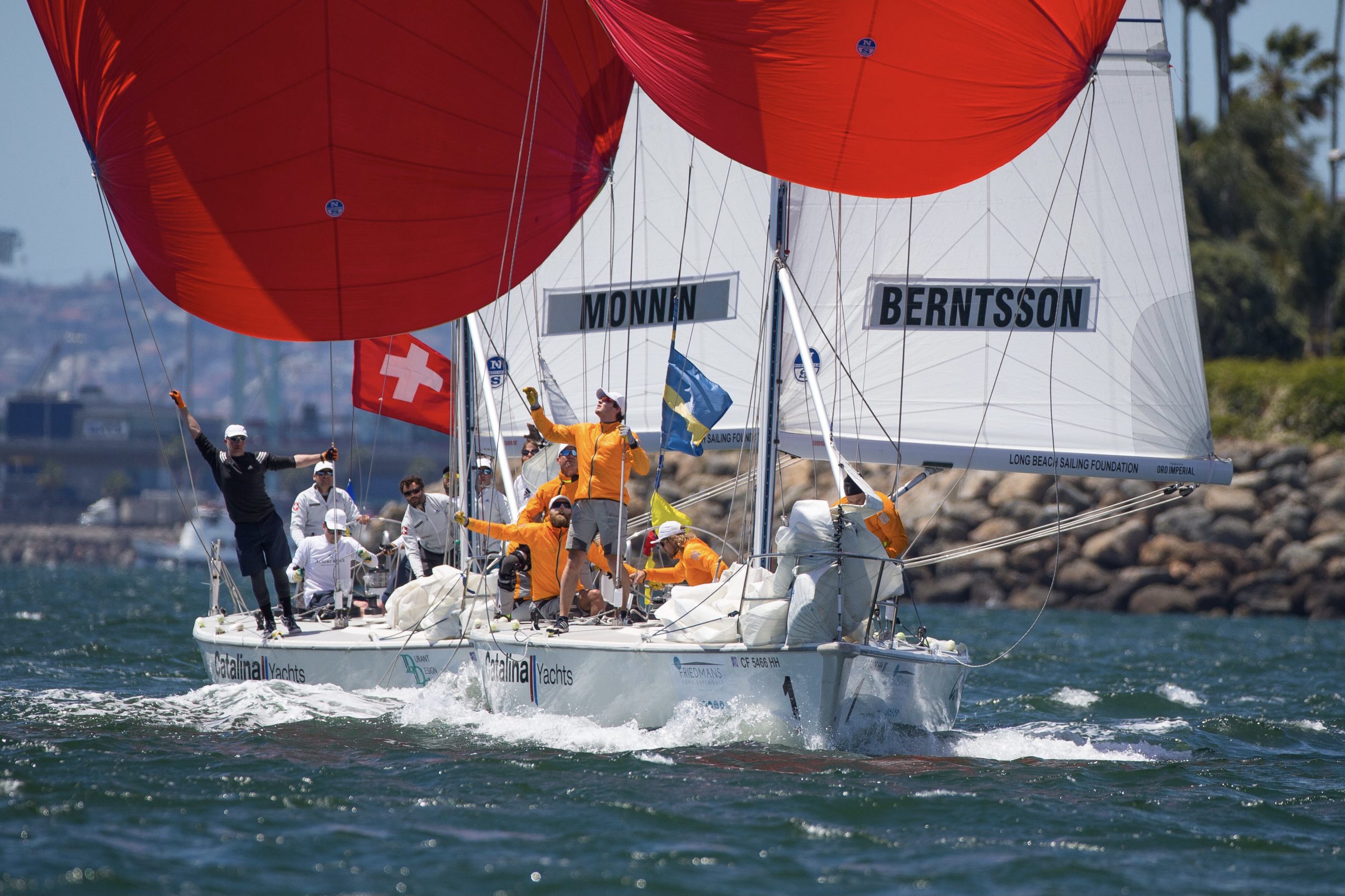 Monnin and Berntsson are among those returning - Congressional Cup pic

The excitement of Congressional Cup racing will return to Long Beach Yacht Club September 14 to 19, 2021 when the world’s leading match racing skippers compete for this venerated trophy and the prized Crimson Blazer.

“That’s a testament to the regatta and the prestige that comes with winning the Congressional Cup: the sailing is competitive and hospitality unmatched! That all six Tour Card holders made it a priority to come here illustrates what a marquis event we have been putting on, for 56 years.”

The Congressional Cup was on hold in 2020 due to the pandemic, making 2019 champion Williams the longest reigning titleholder in history. But the six-time world champion is also a quadruple winner of the Crimson Blazer – 2011, 2012, 2017 and 2019 – and tied with Taylor Canfield, Gavin Brady, Rod Davis and Peter Holmberg with four wins each.

If Williams can clinch victory in 2021, he’ll also become the most winning skipper in the 56-year history of this prestigious event.

But not if Canfield has his way! The American – with Congressional Cup victories in 2014, 2015, 2016, and 2018 – also has his eye on the title, as he vies with formidable competition to unseat Williams.

Monnin is the world’s top-ranked match racing skipper; Egnot-Johnson is ranked number three; and Mesnil, number four. Robertson, a two-time world champion, took second in the 2015 Congressional Cup. Wild card pick, Berntsson, was the 2009 champion and a three-time runner up.

A second wild card selection – based on past Congressional Cup performance – is LBYC member, Dickson. A steadfast contender, he’s podiumed twice including second place in 2019, and his expertise with the platform and venue are not to be underestimated.

“Every one of these competitors has been here before and made it clear they want to return: we must be doing something right,” Macy added.

“I’m thrilled to see Phil Robertson return after four years: he’s both a fantastic competitor and personality. And Johnie Berntsson is not only a great sailor, but a favorite among our club members. Plus there’s the fiery rivalry between Taylor Canfield and Ian Williams … it is stacking up to be an extraordinary event!”

Racing commences Wednesday September 15 with grand prix dueling in the waters off the Belmont Veterans Memorial Pier. The race format includes a double Round Robin followed by semi-finals and petite finals, with finals on Sunday.

Meanwhile, ashore, racers will be hosted by the generous and enthusiastic members of LBYC. More than 300 supporters sign up to volunteer in every aspect of race management, organisation and hospitality, making it one of the most unique and sought-after premier yachting events for both fans and competitors alike.

“Long Beach Yacht Club has always been innovative and forward-thinking, while still maintaining our roots and pedigree. The Congressional Cup is one of the most prestigious events in yacht racing and should be a source of pride for every single member of this club,” Macy said.

To encourage participation, LBYC will host a Volunteer Rally June 27, to introduce members to the many facets of the regatta.

“Very few yacht clubs offer their members the chance to rub elbows with this caliber of competitor, or be involved in this level of competition,” Macy asserted.

The Congressional Cup is a World Championship event in the 2021 WMRT but is best known as the ‘grandfather of match racing’. Founded in 1965 by Long Beach Yacht Club (LBYC), organisers revolutionised the game of match racing with on-the-water umpiring, and by providing a fleet of identical 37-foot Catalina sloops to ensure the competition is a test of skill and strategy.

Each race day at 11am, spectators pour onto the Pier – at 15 39th Place in Long Beach – to watch this unparalleled, world class competition absolutely free.

For details on the WMRT, visit: http://www.wmrt.com