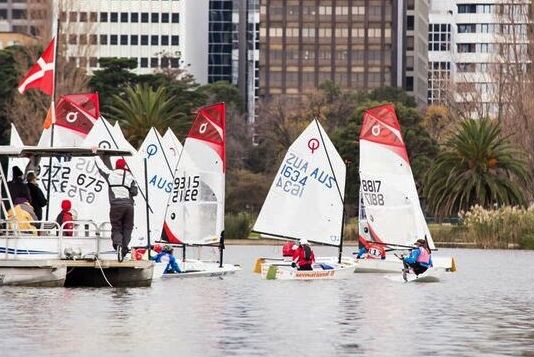 Albert Sailing Club's annual winter regatta for monohull dinghy classes was sailed on Melbourne's Albert Park Lake over the 23th and 24th June weekend. The fleet of adult and junior classes provided a colourful spectacle on the lake with the high rise city backdrop. Seventy boats sailed a series of six short course races across the three sailing sessions.

This was a regatta where light wind skills and patience were required. The first three races were sailed in 2- 5 knot breezes, and the last three races late Sunday morning and Sunday afternoon in 5 to 10 knots . The host club's race management and duty crew did well to fit in six races, with only three short postponements waiting for a breeze to arrive.

The largest fleet among the adult sailors was the Sabre class fleet, where there were a number of heat winners. The lake sailors finished on top in the Sabres with Peter Ellis from Sugarloaf Sailing Club in the northern Dandenongs first overall and Geoff Saliba from Albert Sailing Club second overall.

The Division 6 grouping of 23 juniors in the Optimist class and eight juniors in Open Bic class boats made for the most hectic starts across the weekend. There were individual and general recalls in most of the races, and for the final race a “U” flag start had to be deployed after three general recalls. The junior Optimist sailors demonstrated the value of the weekly VIODA training sessions being held across winter on Sunday afternoons from Albert Sailing Club. Matty Goss from Sandringham/Royal Brighton was the clear Optimist class winner with four firsts and two seconds. Callum Simmons from Indented Head Yacht Club on the Bellarine Peninsula finished second Optimist, Frank Cantwell from Royal Geelong third, and Haylee Archer fourth overall.

The regatta is sailed as part of Albert Sailing Club's winter sailing season which continues with club races on Saturday afternoon's till late September. Full regatta results and details of winter program can be found on www.albertsc.org.au.