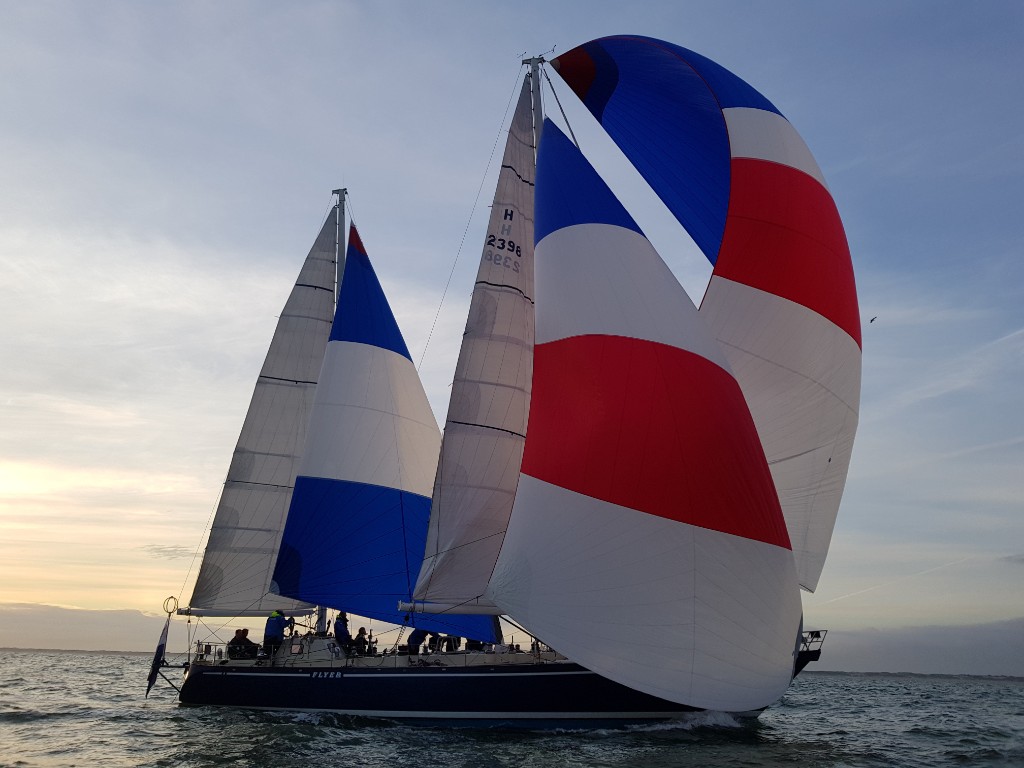 Legendary Whitbread Round the World Race winner flyer close to the finish of the Legends Race.

The Hague – 28 June 2018 – Twelve former Whitbread Round the World Race and Volvo Ocean Race yachts gathered to compete in the Legends Race from Gothenburg to The Hague.  It was the first time that legendary yachts from the 45-year history of the world's leading ocean race have gathered to compete in an offshore race.

The Legends Race started on June 21 in Gothenburg, 45 minutes before the start of the final leg of the 2017-18 edition of the Volvo Ocean Race, which saw Dongfeng Race Team claim the overall victory.

The Legends fleet on the start line was a sight to see, a reminder of years gone by, with the fleet including Copernicus,who raced in the first edition in 1973-74, and overall winner Flyer in 1977-78, to modern yachts like Telefónica Blue , which competed in 2008-09 and Ericsson 4, the winner of that edition of the race.

While the Volvo Ocean 65s started their leg racing in Kattegat and Skagerrak, the twelve Legends Race yachts sailed around the horn of Denmark to face strong winds and rough conditions, which was a big test for these historic boats.

”The conditions were critical at some moments and the fact that all the teams made it to the finish is real proof of a high level of seamanship. It is amazing to see how well the yachts held up and how some of the more modern boats actually reached almost record-breaking speeds on the way south to The Hague,” says Ola Åstradsson, Project Manager of the Legends Race.

“We gathered all these yachts together because we wanted to highlight and promote the history of the race and its legendary stories. The way the teams raced really made it into a celebration of the heritage of the race, which will continue to be built on in the future,”  he added.

The fastest yacht to reach The Hague was Ericsson 4, which finished first of the three VO70s. “It has been a fantastic race and very well organised. The activities and facilities around the event are high class and our team and our friends are very pleased with being part of this regatta”, says Joern Larsen  CEO and founder of Trifork and crew on Ericsson 4 in the Legends race.

Illbruck, famous for winning the Volvo Ocean Race in 2001-02, was the fastest of the six competing Whitbread 60s. But it was by a narrow margin as she beat Assa Abloy by just six minutes. This  earned Illbruck third place on the scoreboard on corrected time behind Ericsson 4 and Telefónica Blue.  Of the older yachts, Flyer showed she’s still got it, beating the other competitors Neptune and Copernicus. Rothmans retired from the race before the fleet entered the tough conditions in the North Sea and Copernicus was the last yacht to reach the finish on June 26, after the crew had chosen to stop in Skagen, Denmark to make repairs early in the race. Her finish position was 11th place, the same as it was when she raced around the world in 1973-74

The Sir Peter Blake Trophy will handed over to the overall winner, Ericsson 4, on Saturday June 30 on the main stage at the Race Village in The Hague.