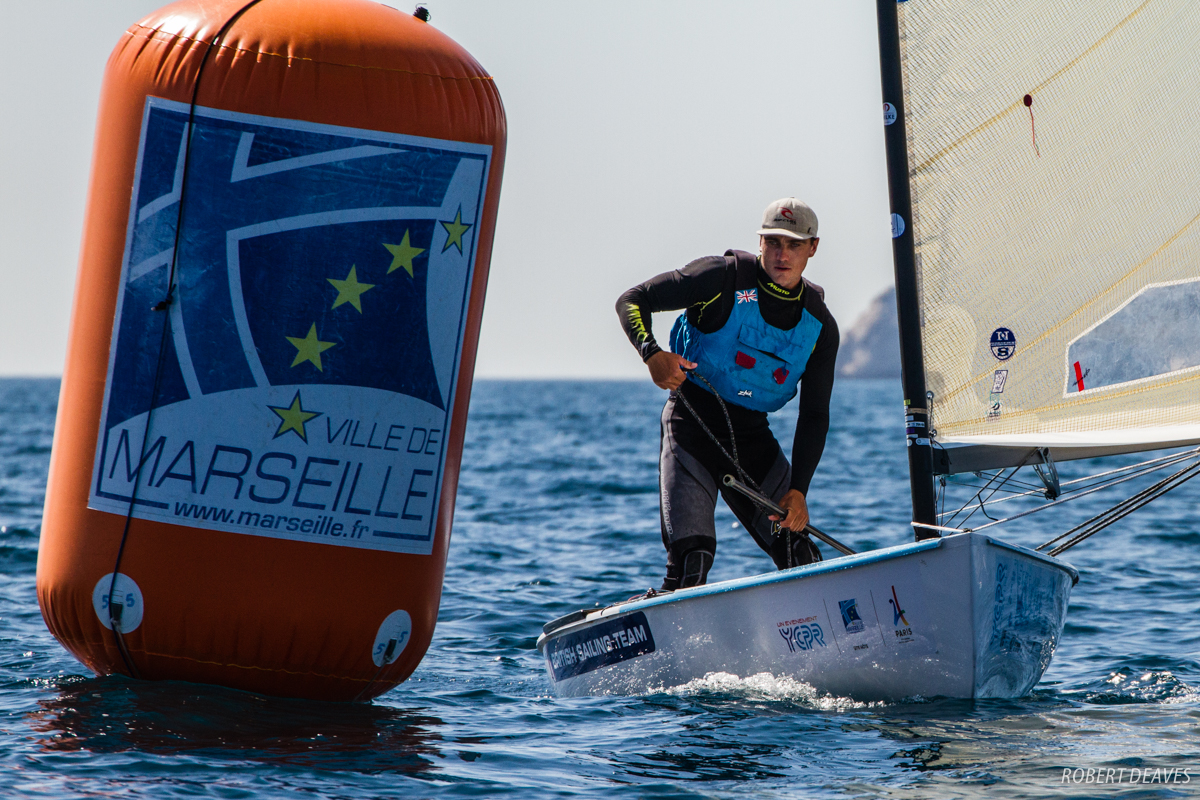 Ben Cornish from Great Britain has taken the lead at the Finn Europeans following a long day on the water after winning the only race possible on a day beset by light winds and abandoned races. Zsombor Berecz from Hungary moves up to second while Anders Pedersen from Norway remains third.

The mistral that has battered the regatta venue for the past two days finally dissipated overnight, and during the morning slowly faded away to leave a light 8-10 knots in place.

The first attempt at Race 3 was abandoned at the top mark after the wind dropped off with Karpak leading round with a nice lead. After a 90 minute wait, the fleet set off again but not before two general recalls, the second under black flag, which pulled out regatta leader Ed Wright, from Great Britain, as well as fourth overall Max Salminen, from Sweden.

When it finally got going, Karpak again led at the top from Pederson and Cornish. Cornish took the lead on the first downwind playing the pressure variations across the course well, and the extended hugely on the second beat to lead down to the finish.

In the chasing group, Berecz found the best pressure on the run to round the gate almost level with Karpak and then take second. Pederson crossed a close fourth

Soon after, Race 4 got away with a clean start with Ioannis Mitakis, from Greece, leading at the top from Cornish and Nenad Bugarin from Croatia. Mitakis held the lead at the gate, but the wind was down to well under 5 knots at times and soon after the Race Committee abandoned the race and sent the fleet ashore.

“It was the second hard day here. Today was the opposite to yesterday, up to 5 knots. Wind was hard enough but I was quite fast in both races. We made almost three races today and two of them were abandoned. And I was twice first boat at the top mark so I am happy with my speed.”

“I finished third in the first race after losing a few places to the good guys, but a nice day for me. I am quite fast in light winds but yesterday I was also quick upwind in the breeze and then struggling in 30 knots downwind.”

Cornish’s win keep the British flag flying at the top of the scoreboard.

“It was a long day on the water just for the one race. The one we got in was a long one. A long course in not a lot of breeze, but good for me as I managed to get the win, which was nice.”

“It was super tight with me Deniss and Anders, especially at the top mark and down the first run, and it started to spread out a bit on the last beat which made my life a bit easier in that light wind”

“It was reasonably tight at the leeward gate but I was quite confident with the numbers I was sailing and we had a reasonable idea where the pressure was coming from at he top right and as it played out it became quite straightforward half way up.”

On his good speed, “We are using some new sails here that we haven’t had much time to test so it’s good to see we are going all right in the breeze we have been targeting.”

“Tomorrow the wind is going back round offshore from the south-east and quite a lot more breeze. Fingers crossed, we’ll be stretching the legs again.”

This week is also the U23 European Championship, with Oskari Muhinen from Finland mixing it with the seniors in 12th overall, just one place and two points ahead of Henry Weatherall from Great Britain.

The sailors were on the water today for more than seven hours with only one race to show for it. The 10 race Opening Series concludes on Saturday morning, before the Semi-Final and Final on Saturday afternoon.