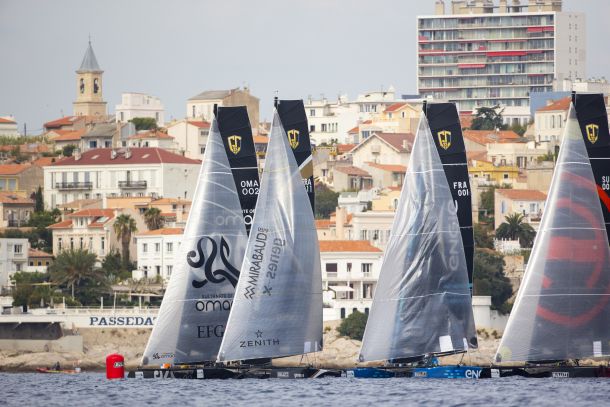 Spindrift racing was the top performing boat of day 2 at Marseille One Design, the finale of the Bullitt GC32 Racing Tour 2015. Yann Guichard got the best of the starts and won two of today’s five races, slightly closing the points gap to the regatta leader Alinghi.

After yesterday’s strong breezes where Alinghi seemed unstoppable, it was a more even game in today’s lighter, semi-foiling breezes on La Rade, the beautiful waters off the shore of France’s second city. “Today was a different game, lighter wind,” said Spindrift skipper Yann Guichard. “The goal today was the start. Our first three starts were really good, starting at the windward end near the committee boat. The axis of the race was not exactly lying to the wind, so you had a long starboard tack and a small port tack. If you won the start you had a good chance to win the race. If you were behind you had few opportunities to come back.”

Alinghi also won two races today, so it wasn’t all bad for Morgan Larson even if not quite as consistent as his French rival. “They sailed fantastically, we gave them some opportunities, made some mistakes,” said the American skipper. “Arnaud [Psarofaghis, the tactician] and I are still learning our communication. Maybe I wasn't going fast enough in those conditions. We were a little slow, trying to find more power but couldn't get it. Still a lot to learn, we learn every day we sail this boat.”

ARMIN STROM Sailing Team was making a good progression up the rankings with scores of 4,3,2 in the first three races. However Flavio Marazzi’s team ran into bad luck between races when their rudder struck a metal object just below the surface which bent their gantry out of shape. “Luckily it hasn’t done any damage to the rudder itself,” said British crewman Adam Piggott, “so we should be back racing in the morning.”

Before the enforced retirement from the last two races, Marazzi was closing the gap for 3rd place on Sultanate of Oman who didn’t look as comfortable in the lighter breeze as they had on their first day’s racing yesterday in the strong breeze. According to the temporary skipper, Nathan Outteridge, it was a lack of knowing how to ‘mode’ the boat for the conditions. “There wasn't a whole lot of foiling today,” said the 2012 Olympic Champion. “You had to pick your moment if you tried it. The manual rake adjustment on the foils means you need to sort out your communication and get other guys on the boat to work it for you.”

Outteridge is used to racing longer catamarans and was having trouble getting his eye in at the all-important starts. “We just weren't getting off the line very well initially, but we were getting a bit better by the end,” said the Australian. “We thought in the last race we were going to be over but it's hard to get your judgement when you're used to racing a 45ft boat. You end up a bit further behind the line than you need to.”

Twice, Sultanate of Oman found itself in a neck-and-neck duel down the final reach towards the finish, both times coming off worse from the battle. On one those occasions the Omani crew lost out to Team ENGIE, giving Seb Rogues his first race win in Marseille. Now, each of the five crews has won at least once at this regatta.

For Outteridge it was frustrating to miss out after leading for most of the race, but again it was a matter of unfamiliarity with the GC32 for this crew, which includes his 49er team mate Iain Jensen and the British double Olympic gold medallist Iain Percy. Even the best sailors in the world have a learning curve to contend with in a technical boat such as this high-flying 32-footer.

In the absence of Leigh McMillan and the usual crew on Sultanate of Oman, who are defending their lead in the Extreme Sailing Series, Outteridge and the GC32 newcomers have been tasked with defending McMillan’s lead in the Bullitt GC32 Racing Tour 2015. Provided Outteridge and Co. finish 3rd or better in Marseille, the 2015 title goes to Sultanate of Oman. Otherwise Alinghi could steal their thunder, a point not lost on Larson. “In a perfect world, the Omani boat has a real bad rest of the regatta and we can get some points between us and them and win the overall Series. But these guys are too good. I don't think that's going to happen. So it's just about doing the best we can at this regatta.”