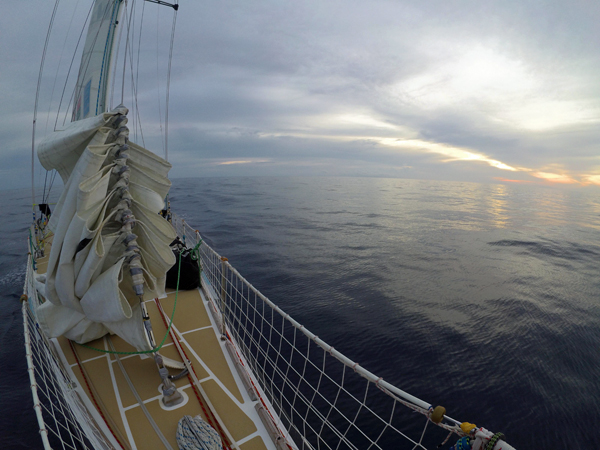 It’s been slow progress in light winds for the fleet on Day 9 of Race 7: The Forever Tropical Paradise Race, with no team managing to sail more than 50 nautical miles in the last twelve hours. And it’s all change on the leaderboard with the teams that opted to avoid the Scoring Gate gaining places dowing to the position of the next waypoint.

PSP Logistics has climbed to first place today after being fifth yesterday. The team has experienced high temperatures (38.9˚C in the Nav Station) and Skipper Matt Mitchell reports: “There are a few squalls in the distance and we are hoping one comes our way, not only for the inevitable push it will give us but for the refreshing rain shower that would come with it too! Here's hoping.”

Sanya Serenity Coast is in second place on the race to its home port but is hot on the heels of PSP Logistics. Skipper Wendy Tuck explains: “During the night the breeze has eased, well sort of died. Post-doldrums doldrums springs to mind. We just have to suck it up and keep trying to make the boat keep moving – not always as easy as said and done, but looking at the weather file we are not the only ones.”

The team was treated to a rare “green flash” and Wendy explained: “Even though we weren't going too fast, not really in the correct direction and it was hot, it still was lovely – the beautiful day was capped off with a slight green spark as the sun went down.”

South-west of the two teams is Qingdao, in third place, and Dare To Lead, in fourth, and the former team’s Skipper, Chris Kobusch, commented: “At the end of the Doldrums Corridor we were beating into over 30 knots and now, 400nm later, we are stuck in light and shifty winds. All day the on-watch struggled to keep the boat moving on course and every little puff of wind was used to get us a few hundred meters closer towards Sanya.”

HotelPlanner.com has climbed to fifth place aftermanaging over 40nm in the last twelve hours, also taking time out to carry out its equator crossing ceremony, with Skipper Conall Morrison reporting: “The evening's sailing was uneventful and we remain making steady progress north in the light winds.”

For the three westerly teams in search of the elusive Scoring Gate, it has been a case of sacrificing position on the leaderboard in the hope of securing bonus points. Visit Seattle has re-emerged from Stealth Mode in sixth place and is leading the charge with Skipper Nikki Henderson explaining: “As I'm sure you can all tell, we are gunning for the Scoring Gate.  Nasdaq and Garmin are hot on our heels so we've been pretty focused on keeping boat speed up and working out which tack to sail on.”

Garmin is around three nautical miles behind in seventh and Skipper Gaëtan Thomas reports: “This race is tight! We are neck to neck with Visit Seattle and Nasdaq. All night and all day the wind was very light and shifting with some little squalls.”

Nasdaq is around six nautical miles further back in eighth but has Visit Seattle and Garmin in sight; Skipper Rob Graham explains that the team has not given up hope: “All three boats will score at the gate, but no-one is settling for that – we're all pushing for the maximum three points.”

Tactics are also playing out further east in the fleet where Unicef and Liverpool 2018 have both opted for Stealth Mode after being in seventh and ninth respectively in yesterday’s report. Liverpool 2018 Skipper Lance Shepherd reports: “As the two easterly boats, the question will be do we have wind or not! The wind hole that was coming over and looks like it may catch up with the whole fleet is forecast to move west.

“It’s a gamble to come far from the rhumb line but the payoff is we are heading up to those trade winds which should fire us over to China. Or we could bob around like a cork for days and be last! Fingers crossed for the first option!!”

Further back, GREAT Britain brings up the fleet in ninth place as the team struggles in a windless area. Skipper David Hartshorn reports: “Our quest to head north to the strong north easterlies, at speed has somewhat ground to a halt. Currently the only thing I can hear sort of thumping is the sound of the generator humming in the background, occasionally when the water briefly stops slapping on the transom as we drift north east.”

Clipper Race Meteorologist expects that the tropical depression that the teams are experiencing will head off west and there may be hope as the front edge of the North Easterly Trade Winds finally approach the fleet from behind the low-pressure system.

Keep up to date with progress, as the teams cross the equator and enters the Northern Hemisphere, via the Clipper Race Viewer and hear more from the Skippers and crew on the Team Pages.

Race 7: The Forever Tropical Paradise Race will finish in Sanya Serenity Marina in Sanya, and the fleet is expected to arrive between 21 – 25 February after roughly 23-27 days at sea.The crews will be excited to explore Sanya and all it has to offer during the stopover, and you can find out more here.

*All positions correct at time of writing