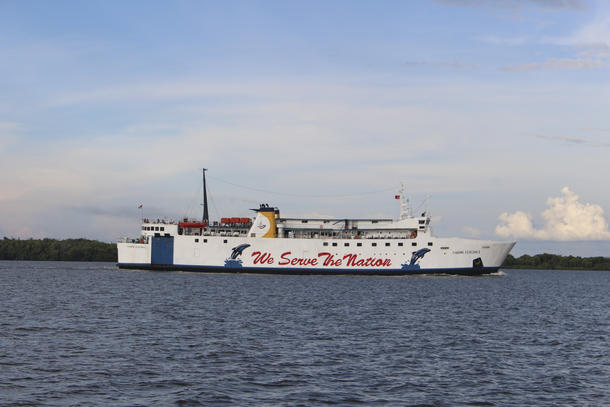 The port light looked like it was getting closer but was somewhat difficult to tell as the wind howled and the rain sheeted down. It is always the way, I thought, as I wondered how far away the ship was.

The prudent course of action was to veer off but, as the skipper rightly mentioned, if we were being tracked by that vessel they should know our course and he would make a firm determination if any action should be taken as we sailed closer. Hopefully they would maintain speed and keep a safe position to go past us.

We had been making an overnight passage, keeping a good watch for any shipping that may be in the vicinity. But, as sometimes happens, you can scan the horizon for hours on end and there is nothing there; then suddenly right in front of you is a ship.

When it happens during the day we can see the direction, but when it happens at night we can judge the direction by the port or starboard lights but that Is all. So when the skipper said the ship was only about two mile off our port side it was a bit too close for comfort, especially where commercial shipping is concerned.

Having done a number of offshore passages the one thing that always kept both of us busy is having to work out the direction and possible, though roughly calculated, speed of the ever-increasing number of cargo vessels plying the seas, just to make sure that we are safe from contact.

Our passages, especially when I am on watch, would have me scanning the horizon for these commercial interlopers. Arrival at a safe anchorage meant that I could, for a few nights at least, say goodbye to the constant need for vigilance and put to the back of my mind those port or starboard lights, calculation of speed and direction of vessel issues that constantly plagued my night watch thoughts.

Times change, particularly where boating and boating toys are concerned. So when we made a decision to make a second trip to Indonesia and further afield, the subject of AIS was raised.

It just so happened that we were also searching for a new chartplotter and, with a spot of good fortune, found just the one we wanted that consisted of a 12 inch screen with an inbuilt AIS. Now we would have a degree of comfort in knowing that some of the guess work was going to be taken out of our cruising.

While it is sometimes easier to have all these electronic necessities, it is the understanding of the operational side of them that can prove problematic. Our problem started not long after we purchased our AIS chartplotter. We could identify other vessels that had AIS and they could see us, but what they were seeing was our 'heading' was always to the north.

Now, if you are newbies as we were to AIS, you will probably say “so what, tracking north”. This information was relayed to us by the captain of a rather large container vessel, he could certainly tell that we were not going to collide with him but it took some explaining to allow me to understand that to others it looked as though we were heading straight for a reef or in other directions that we were not actually going.

Now having identified the problem our next mission was to rectify it, but there was a certain dilemma surrounding this seemingly simple task.

We were on our way to Indonesia and we wanted to stay with the rally. So, after a phone call to the distributor regarding our brand new, less than six weeks old, chartplotter with integrated AIS, the distributor proved exceptional with his after-sales service and promptly dispatched a new gyro, which was the cause of our tracking north issue. He sent the parcel to Indonesia by express mail as this, we were told by our Indonesian rally organiser was by far the best means of getting our gyro quickly.

So we headed off on our second Indonesian rally with an AIS, albeit tracking north. But the beauty for me was that I could now identify other vessels. I could clearly see their course, their speed and their call sign or names should I need to make contact. I was one happy chappy. Four weeks later our rally organiser brought the parcel to Lembata, one of our rally destinations and we had the old gyro out and the new one in and it worked perfectly.

It would be remiss of me not to mention that prior to installing the new gyro, during an overnight trip from Banda Nera to Namroule, I had a need to contact a commercial ship that was transporting goods and people from Java to Ambon.

We clearly saw that the vessel was trying to correct his course thinking that we were tracking north, when in fact we were heading west. I informed the captain “we had broken gyro, broken gyro and were heading course 292 degrees.”

I heard an audible “ahhhh”, on the radio and there was an immediate change in the course to come around and pass us port to port, problem solved.

This could actually have been a mid-sea collision had we not been able to physically see what the other vessel was doing.

During our four months in Indonesia we did a number of overnight passages that took us across shipping channels. In most instances we were able to clearly identify and talk with various vessels about their or our intentions. It has made life much more enjoyable, less stressful, especially at night.

Now I must say that still not all vessels, be they commercial, yachts or fishing boats, have AIS. It remains a must that a watch is kept during any passage. Do not let electronics rule, but do let them act as tools to assist in passages.

The shipping highways around Indonesia through to Singapore and onwards to Malaysia have been made far simpler to traverse due primarily to the fact that we were aided in our passage-making by our AIS. It was also a positive to know that the vast majority of Malaysia's fishing fleet, unlike their Indonesian counterparts, have installed AIS.

A legal need for AIS

An important issue to be raised while discussing the various countries we would be cruising to is the legal requirement that all vessels entering countries like Singapore should carry an operational AIS. Lets face it, the waterways around this small but hectic commercial shipping hub make for an intense time when it comes to making the crossing between Indonesia and Singapore and onwards into Malaysian waters. The use of our AIS system allowed us to track these huge commercial vessels allowing us to see the speed and direction of vessels bearing down on us.

Thailand is also an important destination for cruisers as this country now insists all vessels, commercial or otherwise, have an AIS working. We have been informed that should we enter Thai waters without an operational AIS it will mean jail: no exceptions.

We were not about to prove a point, but needless to say all the yachties we spoke to who were intending to enter Thai waters were carrying full AIS systems or were in the process of upgrading to the transponder unit, they too were taking the issue of AIS seriously.

Indonesia also requires an AIS, but is somewhat more lenient in that it appears they will allow vessels with receivers but do not insist on the vessel carrying the full transponder version. With the amount of traffic making its way through Indonesian waters it seems negligent not to allow others to see where you are.

All the vessels on our wonderful 'Sail to Indonesia rally' who did not have transponders said they were sorry they had not bought the complete unit and could clearly see the benefits of having a transponder to see and to be seen. ≈