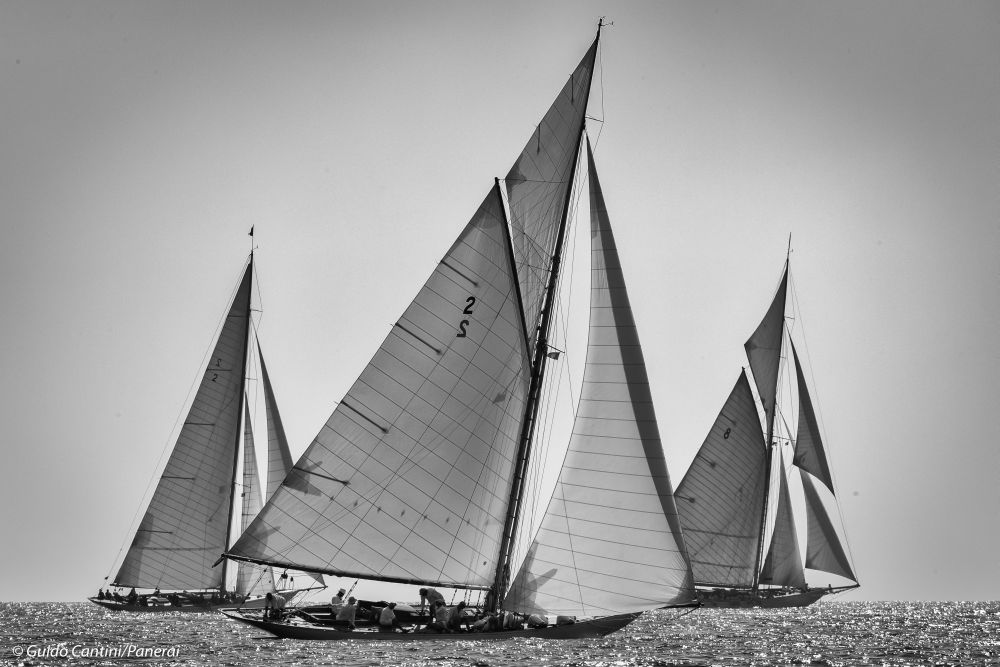 One lap for the classics, two for the big boats, three races for the 5.5 and the Tofinou, two for the Dragons: a lot of action on the Bay of Cannes today, despite a very light northerly, not exceeding eight knots. Mid-way through the Régates Royales de Cannes, in most classes, victory is still there to grab.

Typical early autumn conditions on the Cote d’Azur, the day started with a cloudy sky and then, as hours went by, the sun came out and a light southerly built, before dying down again in the late afternoon.  But the local organizers and the race officials, after a short postponement, opted for an almost windward/leeward course just off the beach of Cannes-La Bocca, with a long upwind leg towards, a mark turning and a downwind beat to La Napoule. The 15 Metre Mariska winning yet another duel with her bigger brother Cambria. In the other classes, the light wind conditions favoured those who managed to sail and manoeuvre well like Angelo Mazarella’s Carron II or Brendan Mc Carty's Rowdy, that jumped on the top of the provisional scoreboard.

The one-design and small Metre classes – Dragons and Tofinou-  had their course set on the golfe Juan, that proved to be an even more complicated, tactically tough race area with light air and an uncomfortable sea state. The first race went to Russian Annatoly Loginov on Annapurnawho managed to sail past the finish line just seconds before UK’s Yvan Bradbury on Blue Haze. Behind them, four crews put up a fight for third place, with Germany’s Pedro Rebelo de Andrade on Pow Wow succeeding in crossing the line before his opponents Igor Goikmberg from Russia on Zenithand the two French team skippered by  Jean Breger on Ulysse and Géry Trenteseaux on Courrier des Saints. The Race Committee was able to launch a third race: British crew profited from a wind shift, whilst the Russians were dragging in the back of the pack. A good chance for Pow Wow to bounce back, as did female skipper Gavia Wilkinson-Cox on Jerboa, who crossed in third. The next to days will be absolutely crucial for the overall win at the Régates Royales, with are no more than ten boats aspiring to a place on the podium, and Yvan Bradbury’s consistency could make a real difference.

Switzerland’s Christian Bent Wilhemsen on Otto got his second consecutive win in the  5.5 Metre class, in front of Bahamas’ Merk Holowesko New Moon, who later  made a great comeback with two wins. Among the Tofinou, Edward Fort on Pippamanaged to keep the leadership, despite attacks by French skipper Patrice Riboud on Pitch.

Serial sailors
Bruno Troublé, the Cup is in my DNA

They may be America’s Cup, Volvo Ocean Race, Mini Transat, offshore or Olympic sailors or maybe all of the above. Many can be seen on the dock in Cannes for the Régates Royales-Trophée Panerai.

French skipper Bruno Troublé loves classic yachts, when he’s not busy with the America’s Cup… Here is an interview, with some interesting news about his future plans too.

Bruno Troublé, it’s a P-class boat this time
“Yes, that’s right. I’m racing on Chips, a boat designed by American Starling Burgess in 1913, the same architect who also signed Ranger, Rainbow and other famous America’s Cuppers. We race in the same class as Olympianby William Gardner but they are much faster than us in light air. I found both boats in a pretty bad state in the USA, had them restored. Funnily, they look very much like J Class boats, because they were conceived applying the same Universal Rule created by Nathanaël Herreshoff in 1903. In fact, there were many classes: the “P”, the “Q” like Jour de Fête and also a R-class Class-R, Aloha designed by Edson B. Shock in 1923. All in all there were some twenty P-class boats but today only seven or eight remain, two of which are based in Canada: I know where they all are…”

Pity, the class did not last long.
“Yes. You know, the rule was leaving a lot of  creative room to designers, but unfortunately it only lasted a few years. Pity, because the yachts wherever light and fast, especially in light air. The Metre rule, on the other hand, was very strict and created boats that were pretty heavy. At the end of the day the P, Q and R classes produced as many boats as the Metre Rule,  between 1920 and 1930, but then it all after before WWI, when the rule was progressively abandoned.”

Chips is not the boat’s original name, is it?
“No, when she was launched the boat was called Onda III, but a banker from New York got her in 1926 after a winning poker match, so she was called  Chips… Today she’s owned by Sébastien Bazin while Olympianis owned by Philippe Oddo.”

You still have your own boat?
“I sail a lot on other people’s boats, that I helped restore, I have a cruiser in Greece. That is why I can race prestigious boats like Jour de Fête, Runaand now Chips…”

What are you plans for the future?
“I’ll be back to the America’s Cup, working with Grant Dalton, helping him organize the Prada Cup that will take over from the former Louis Vuitton Cup. I’ve been a huge supporter of the kiwis when they challenged the American defender because I didn’t like Russell Coutts’ version of the AC. I’m not a very big fan of video-games…”

In 2017, the Cowes Royal Yacht Squadron celebrated the 110th anniversary of the International Metre Rule, a revolution in yacht-design that produced boats as famous as the 23 Metre Cambria or the 12 Metre class, used for the America’s Cup between 1958 and 1987, or the 6 and 8 Metre, still very popular today and with huge fleets worldwide, not to mention the 15 and 10 Metre boats, that still take centre stage at the Régates Royales de Cannes.

Despite their age, the boats from the Metre classes, designed with a rule created in 1907, are still racing at some of the world’s best events, including Cannes. At the beginning of the 20th century, leisure boating was becoming popular and the number of yacht clubs in the USA and Europe was steadily growing. Almost every country, or even every club, had its own rule: the French had the “Tonneaux” (1877-1899); the Swiss the “Godinet” (1892); “Sonderklasse” was applied in Germany (1899); the Americans used the “Universal Rule” (1903), “in-keels” were popular in Scandinavia as the “Second Linear Rating Rule” (1898) was in the UK. It was thus hard to make such different boats, based on such different design rules,  race against each other. The new IMR gave birth to eight classes: the 5, 6, 7, 8, 10, 12, 15, 19 Metre classes, plus the America’s Cup inspired 23 Metre boats. They were also selected for several editions of the Olympic Games and for the AC.  A huge success, suffice to say that, over the years, more than 150 8 Metre, 193  12 Metre and one thousand 6 Metres were built!