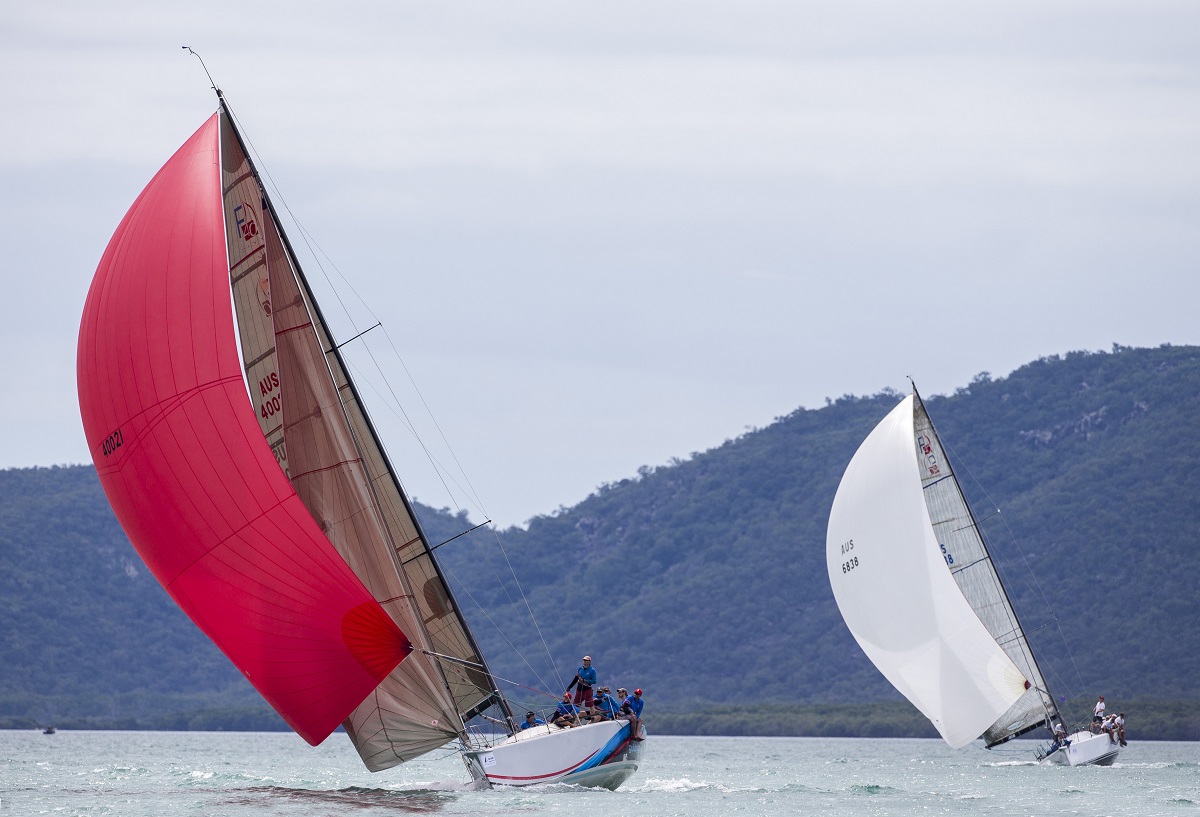 A slow start to the day at Sealink Magnetic Island Race Week, when the wind refused to play ball and race management was forced to delay the planned 11am start until they were able to get the IRC, Performance Racing and multihull classes away from 12.15pm, and while the conditions did not suit some, it was a boon for others.

Simon Monfries sailed his Hartley Custom, Jimmy’s Ghost to a win in Cruising Division 3. That he won at all was something of a surprise, as Monfries sailed the boat two-up and the twosome were able to set spinnakers because of the light air.

“We had a fantastic start – we actually started with the right division today – we were late to the start yesterday,” Monfries, who represents Townsville Yacht Club said.

“We had an excellent spinnaker run and everything went well. The light air made it easy for us to set a kite, if it had been windy, it would have been ‘forget it’. Everything just fell into place.

“I originally had more crew, but they pulled out at the last minute, which was really annoying, but we’re getting around alright and enjoying it very much. It’s our first time here and we’ve met heaps of great people – it’s fantastic and the organisers are doing such a good job,” Monfries ended.

Not all were well behaved. Antsy to get off the start line, there were individual recalls in at least three classes, including Dennis Coleman’s Mistress, a Corsair Spring MK1 representing event organiser, Townsville Yacht Club. Like her fellow transgressors, Mistress lost time having to re-start.

Finally, as predicted, wind on the Townsville side of the course, but little off Magnetic Island, so it was a little slow going in places, but a beautiful day out nonetheless.

Malcolm Richardson’s Nacra 36c, Malice, was the first boat drop kite and round the mark near Middle Reef after a long run, but was taken on a course away from the mark.

Richardson, who has his nine year-old son Giles and 12 year-old daughter Grace sailing with him explained: “Apparent wind took us away from the mark – it’s not always directional sailing on multihulls. We enjoyed the day. Beautiful conditions and Malice lights up fast in any increase of pressure.

“We’re looking forward to a good finish to the regatta too, because we’re expecting big breeze for the last two days. It’s a family affair this week with my son and daughter and we’re all having a great time,” ended Richardson who last raced here around five years ago when his carbon Nacra 36c was new.

In IRC Racing, the Andrew Pearson skippered Elena Nova had another cracker of a day to score her second win of the series, in fact yesterday’s top three remain the same, with David Currie’s Ponyo second and the Peter Sorensen skippered Botany Access Cocomo third.

Tomorrow is a layday. Racing continues on Monday from 11am. The fleet is represented by boats from Queensland, Victoria, NSW, Tasmania and South Australia.