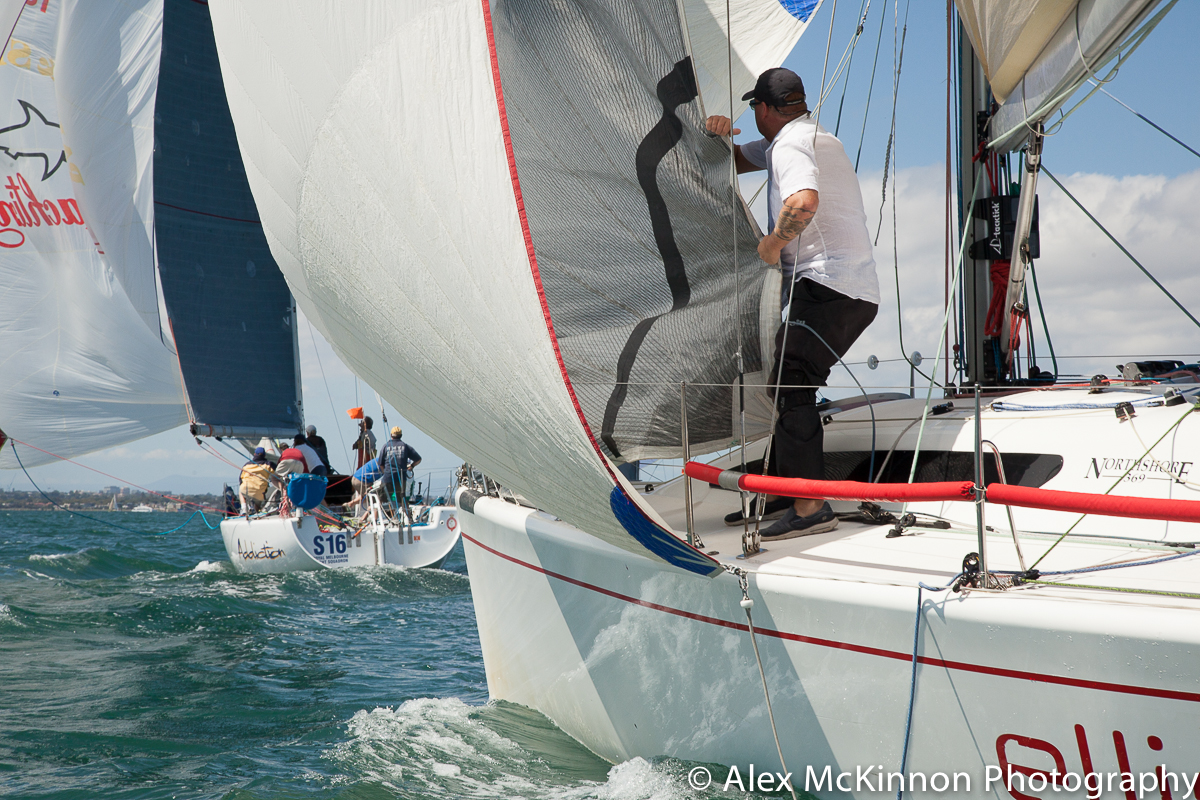 All Division 0 boats played a conservative start and maintained a comfortable playing field. Opportunities were seized by some boats taking advantage of the occasional puff and flat water. ‘Primitive Cool’ took line honours with a close finish to ‘Terra Firma’ who finished one second behind them. This time wasn’t enough to secure the IRC win for the day but did have them win the YV Performance Handicapping Division. ‘Terra Firma’ took first place in IRC and Cadibarra took first in the AMS ratings. ‘Veloce’ stays ahead in the series scoring for both IRC and YV Performance Handicapping, while ‘Simply Fun’ maintains the lead in AMS.

Division 1 boats showcased a competitive start with the 23 boats all vying for their ‘breathing space’ on the first upwind. ‘Ikon’ was back in full swing with a solid win in both the IRC and AMS divisions keeping them in the lead for the overall series in the same rating divisions. There was intense racing, as boats seemed to be suitably categorised, for the duration of the race with nail biting finishes for all competitors.

Podium places of the overall series scores in Divisions 2 and 3 are all within a narrow margin of each other so all competitors were giving it everything they had to securing a good placing. Max Peters, winner of Division 2 IRC for Race Day 5 and current leaders of the IRC Division 2 Series and owner of ‘Top Gun’, explained their win:

‘We do our homework- we studied the wind for a few days prior so knew what our game plan was going to be. We had a medium start but managed to make good decisions and extended our way up the fleet. We’ve been a team for a few years now (with a couple new guys) so have locked in our boat handling but we also take the time to look after the little things: less crew on light days, adjusting our rig settings and cleaning the hull for example. All the little things add to getting the maximum performance from our team and the boat.”

Bas Huibers, owner of ‘Merak’, stepped up with a win in the Division 3 YV Performance Handicapping yesterday. He explained the significance of having a good quality fleet to train and compete against:

“We put our performance down to having a highly skilled and talented fleet; when the benchmark is so high you have to step up if you want to do well. One Design racing allows you to gauge yourself and your team’s performance and this helps with your overall performance in a mixed fleet as the skills are transferrable. We’re very pleased with our result today and hope to continue this in the next couple races.”

Blue Fleet continues to enjoy the fun, inclusive and relaxed racing on Port Phillip Bay. Nick Knezic, owner of ‘Finesse’, took advantage of this set up with having three generations on board each contributing to the race in some form:

“We had a blast on Saturday! We have Rod on the bow (who’s in his seventies), Angus (Rod’s grandson who’s under ten), my wife and our family friends on board all having a great time on the water. My mate and I have done the competitive sailing rounds, we’ve represented Australia and completed our sailing goals back in the day but we’re now about sharing our love for sailing with our family. It’s the best of both worlds- we get to race (where we need to focus on tactics and strategy) and the family gets to be on the water with us! We even open a bottle of wine on the downwind leg. It doesn’t matter what our results are we just enjoy the culture of the Blue Fleet and look forward to the last couple races.”

The second last Race Day continues next month on Saturday, March 19th; keep an eye out for details in the coming weeks.