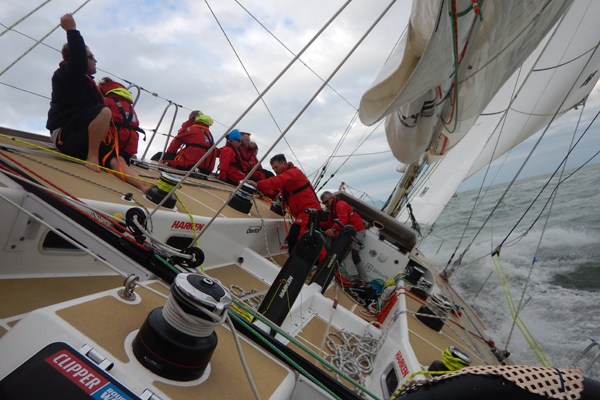 With the fleet on an easterly course currently headed towards Taiwan on the race to Qingdao, the wind is picking up and will continue to do so for the next 18-24 hours. Clipper Race Meteorologist Simon Rowell has predicted wind speeds will reach 35 knots, with slightly higher gusts on Day 2 of Race 8: The Sailing City • Qingdao Cup.

Over the last 24 hours, the fleet has been tacking in close quarters to avoid the Paracel Islands, and is now headed to windward in a small sea state and around 25 knots of wind.

ClipperTelemed+ is now heading the fleet with Visit Seattle in second place and LMAX Exchange in third place.

Ashley Skett, Skipper of Garmin, in seventh, said with the wind building, careful consideration was needed to find the right sail plan.

“Eventually last night we found a good combination of boat speed and pointing ability as we attempt to make up a bit of ground on the front-runners.

“After lots of tacking to avoid some islands, we are now on an easterly course in the middle of the pack as we all try to make some decent progress to windward. The wind has slowly been building and selecting the correct sail plan took a lot of consideration and eventually turned into a bit of a trial and error process, much to the frustration of the soaking wet bow team I am assuming!” Ash added.

Matt Mitchell, Skipper of ClipperTelemed+, currently in first, said things were going pretty well on board with the crew slowly getting used to life at an angle and the green monster making its last appearance.

“Yesterday's drag race turned into a bit of a tacking battle as we made our way up a restricted area of the race course, other boats favoured a few long tacks however I decided to short tack up to the limit of the restricted area, and it seems to have paid off so far.

“Now we are back to drag racing mode and we have been on one tack for a while now. Right now we are concentrating on keeping the boat going as fast as we can. We are up against some stiff competition so the pressure is on,” Matt added.

All positions correct as at 0900 UTC.

If you think you have what it takes to sail the world’s oceans, click here for details on how to speak to our recruitment team.