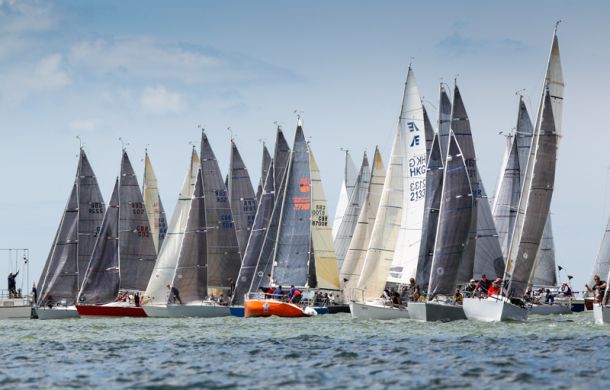 29 February 2016 – Cowes, UK – 2016 Marks the tenth anniversary of Coutts' title sponsorship of the revival Quarter Ton Cup. Since it was first run in 2005 the event has gone from strength to strength and Coutts' support since 2007 has been vital in helping to achieve that success.

The Coutts Quarter Ton Cup 2016 will be hosted by the Royal Yacht Squadron, Cowes, from Wednesday 15 to Friday 17 June. As always the event will combine some of the closest and most exciting inshore racing anywhere in the world with a fun social programme and great class camaraderie.

Another new development for this year's event i s the introduction of an additional class. Class Chairman Peter “Morty” Morton explains the reasoning behind this. “What has occurred over the past few years is that the prototypes and past class winners have been upgraded considerably and in an attempt to encourage the production and older boats back to the event the organisers intend to run a second class provided sufficient numbers enter, known as the cruiser racer class. This will be for boats of a rating of 0.89 and below and for boats such as a GK24, Bolero, Quarto, Farr 727's, Eygthene 24's, Trapper 300. We know there are literally hundreds of those around and hopefully enough of them want to enjoy the regatta. They will be racing for the Roger Swinney Quarter Ton Trophy and it is intended that a round the buoys course will be set for them.”

The Quarter Tonners have suffered two sad losses in the past year. Roger Swinney, a founding member of the revived Quarter Ton Class, first with the 1979 David Thomas designed Tsunami, which he renamed Ayanami, and then later with the 1986 McIlraith designed Innuendo, sadly passed away in November. His joie de vivre and love of the Quarter Tonners made him a hugely popular figure with his fellow sailors and he will be much missed.

Another much loved member of the class lost recently is the legendary Espada, a 1980 Bruce Farr design and winner of no less than three Coutts Quarter Ton Cups, which was destroyed in a boatyard fire in January. Morty is working closely with Espada's owner Julian Metherell to find him a replacement in time for the season.

In happier news Robbie Stewart has tracked down and bought Hellaby, the Laurie Davidson design that came second to Bullit in the 1980 Quarter Ton Cup in Auckland. Our photo (courtesy Erle Williams) shows Hellaby on her way to second place at the 1979 Quarter Ton Cup with Johnny Lasher helming, Tony Bouzaid navigating, Erle Williams trimming and Joey Allen on bow

Protis, Bruno Trouble's 1981 Fauroux design which won the QTC in Marseille that year, was found by Morty in Italy and has been bought by Diarmid de Burgh-Milne. She is currently undergoing a full refit at Casse Tete Marine ready for the 2016 season.

Fauroux is very much the designer of the moment when it comes to boats changing hands. Tiger, his design from 1989, has been bought by Tom Daniel. Thomas Prower joins the fleet with his purchase of the 1981 Lancelot. Olly Ophaus has bought Howard Sellars and Mike Till's 1977 Bullet and Jo Roberts has acquired the delightful Menace, designed by Fauroux in 1981.

The fleet is also very much looking forward to welcoming back Dutchman Berry Aarts with a restored Wings, which was built to a Stephen Jones design for the 1978 QTC in Japan.

The Notice of Race, Entry Form and further information will be available shortly from www.rys.org.uk.