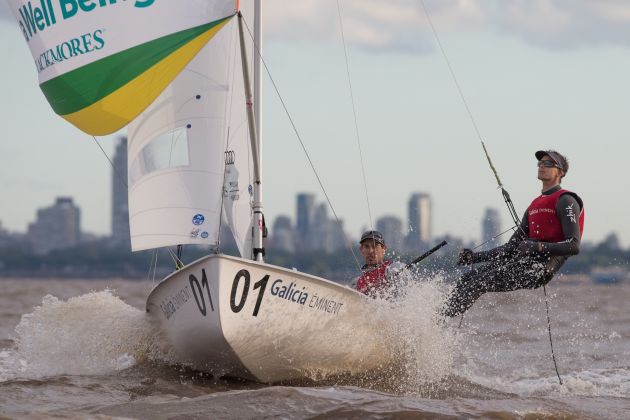 Becher and Ryan at the 470 Worlds. Photo Matias Cappizzano.

France followed in fourth, one point behind Australia, but were awarded a bronze medal as well after a successful redress due to a Race Committee mistake in the French scoring over the last couple of days.

The Croatians were the last team to win a 470 World title in 2009, before the six-year run of World title success by Mat Belcher, three golds with Malcolm Page and three with Will Ryan. They led going into the Medal race with a 16 point advantage over the Australians, which Mat Belcher and Will Ryan were not able to surpass with a fourth place in the double-points Medal race to the Croatian’s fifth.

“Today we went in with the chance to swing-chance the win. We definitely went out there and did our best and unfortunately, it just didn’t go quite our way, which happens in racing. We look back now and we see plenty of opportunity through the week we could have capitalised on better, but that’s what we have six months of training for so that it will be easier in Rio”, Will Ryan said.

“It’s been a pretty difficult week.  We’ve had long days and obviously with some challenges we weren’t quite prepared for and the weed has made it very difficult to race our normal style,” he added looking back on the week.

The bronze medal wraps up a challenging week for the World #1 pair in tricky conditions in Argentina sailing out of Club Nautico in San Isidro on the Rio de La Plata. In a virtual ‘sea of weed’, the silt from the delta turns the water brown, making it very hard for the sailors to see the breeze on the water; add more than one knot of current, and the package certainly made for challenging racing across the fleets.

After a rough start to the regatta, the pair had a strong come back from 33rd overall on the first day to win the bronze medal.

“The weed has been a bit of the highlight of the event and it’s been just tough racing and something we are not quite used to. The challenge for most of the sailors for the last couple of days has been staying out of trouble and like everyone else, we’ve been spending a lot of time clearing the weed this week to actually sail the race,” Mat Belcher said referring to the added race track dynamic.

“It’s been good competition and apart from the first day's racing we were really happy with how we came back. Overall, we’re happy with our performance, but we’re disappointed with the result. When you have won so many worlds, you want to win and that’s what we are here for. It’s a credit to the others and their performance and they seemed to handle conditions a bit better than we did. We learnt our lessons this week. It hurts a bit now, but we’re looking forward to making a few changes and hopefully for the Games we’ll be ready to go,” reflected Belcher.

“I come from a string of World titles and this is a unique moment for Will and I as we haven’t been through a situation where it hurt. This has really been the first time in a Medal race where we didn’t get the result we wanted, so I think it’s quite a good lesson.“

The mistake we made in day one hurt, but as a team we regrouped and were able to put together a solid set of results. I think these lessons and this event will help us a lot going forward and I’m really excited where we are going as a team,” Mat Belcher added confidently.

The bronze medal adds to Mat Belcher and Will Ryan’s medal series with the pair having continuously finished on the podium at every sailing regatta they have competed in since getting together post the London 2012 Games.  The pair has won the 2014 and 2015 Rio Test Events as well as the 2014 and 2015 Copa Brasil de Vela and remain undefeated on Rio waters with less than six months to go to the Rio 2016 Olympic Games.

“It's been a tough week for a lot of teams here, and for the race committee too as they tried their best to get in fair  racing around shifty wind conditions and huge amounts of weed all week. This venue has definitely presented some unique challenges for everyone, and built up a new skill of foil-clearing in the fleet,” Jaime Ryan said about the conditions in San Isidro.

And with regards to the racing she added: “We had a lot of good moments in the racing and managed to get a few good results on the board, but we missed a lot of opportunities around the track and made some silly mistakes that cost us, so it's disappointing to come away knowing we didn't sail our best.”

While Mat Belcher and Will Ryan have already been selected to represent Australia in the Rio 2016 Olympic Games in the men’s 470 class, the women’s crew is yet to be selected. Australian Sailing Team’s Carrie Smith and Jaime Ryan, who are coached by Olympic gold medallist Nathan Wilmot (NSW), are vying for the spot and their selection over the next few months.

“With our ongoing selection process we were feeling the pressure to post a good result at this worlds, but although we didn't quite achieve that we have still come a long way from where we started sailing together a year and a half ago. We have learnt a huge amount from the racing here and ticked off a few of our key goals we had coming in, so we are happy to be improving and we'll take that away as a positive,” Jaime Ryan said about the ongoing selection process.

Team mates Sasha Ryan and Ella Clark have teamed up for this regatta and will continue racing the up coming European season which will make for an interesting Australian battle.

It is an interesting scenario as two sisters, Sasha and Jaime Ryan, face off against each other.  Older sister Sasha is helming the new combination with crew Ella Clark, who won the 2013 Youth World Champion with Carrie Smith and has just returned to competition.

With brother Will Ryan sailing with Mat Belcher it is a unique situation to have three siblings campaigning together, something that does not always sit comfortably with Jaime as she competes against her sister: “To now be racing against Sasha is a very unique situation and maybe not the most ideal, but I think we try not to let it get too personal. It is just racing, and at the end of the day, the one who comes second is happy for the one that comes first. Sailing is pretty brutal in the selection process and we just have to be happy for each other and support each other.”

The 470 crews will compete at the Trofeo Palma in Spain at the end of March next, followed by the European Championships and the Sailing World Cup in Hyères, France in April.

In other World title events the 2016 RS:X Men’s and Women’s World Championships wrapped up in Eilat Israel with Australian Sailing Squad’s Joanna Sterling (QLD) finishing the event in overall 36th.

“Unfortunately I scored a big result in the qualifying and with only four races making up the qualifying series, I had to carry that result and missed out on Gold fleet. That was really disappointing after seeing so much improvement in my sailing. My speed in light and marginal conditions, which has previously been a liability, is now one of my strengths and the hard work I've put in over summer has paid off by increasing my fitness and power.  Now the priority for my training goes to gaining racing experience across all conditions to improve consistency in my results and despite some setbacks this event was a valuable experience.

Six days of racing are scheduled from 28 February to 4 March 2016, with three days qualifying and three days finals racing.

Ashley Stoddart secured Australia a spot in women’s one-person dinghy, the Laser Radial, for the 2016 Rio 2016 Olympic Games at the 2015 Laser Radial World Championship in Al Mussanah, Oman in November and will be vying for selection over the next couple of months.