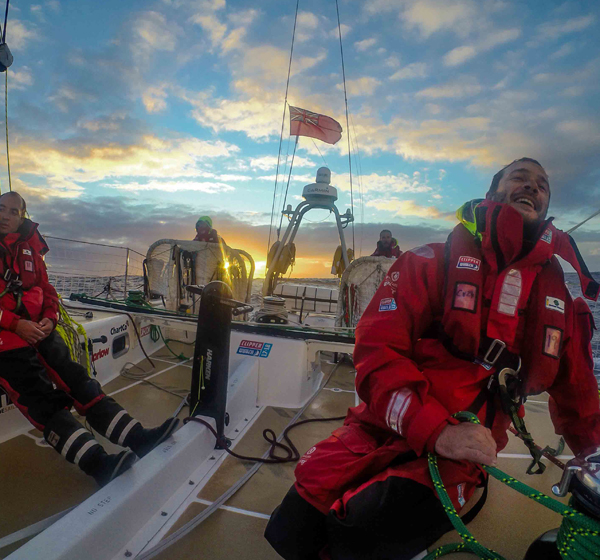 With less than two days before the fleet is scheduled to start descending upon the V&A Waterfront in Cape Town, light wind conditions are bringing last minute frustrations for the majority of the fleet, with leader board positions still very much up for grabs.

With Dare to Lead and Garmin activating Stealth Mode, Greenings leads the fleet once again with less than 350 nautical miles until the finish line. Talking about the striking difference in weather conditions, Greenings Skipper Andy Woodruff comments: “It has gone quiet at sea on what may be the penultimate night before reaching Cape Town.

“This could not be more different than the 24 hours where we sailed 329 nautical miles!”

Liverpool 2018 has crept up the leader board from fourth to second thanks to the absence of the teams in Stealth Mode, and has taken advantage of the light wind patch to complete some routine maintenance before Cape Town. Visit Seattle currently holds onto fourth place with Nasdaq, also suffering in the light winds, sitting in sixth behind Qingdao. Nasdaq Skipper Rob Graham explains: “What had started so well with a neck-and neck drag race against Qingdao turned into a struggle to keep our good ship Nasdaq moving at all, never mind in the right direction.

“It was some consolation to remind ourselves that the other boats around us were having the same struggle, but having blown apart our Code 1 (lightweight spinnaker) a couple of nights ago, we seemed to be even slower than them – as we saw when Qingdao and then Visit Seattle popped up on AIS for a while.”

The two Chinese team entries competing in the 2017-18 edition, Sanya Serenity Coast and Qingdao, have made some gains overnight and now sit in third and fifth place respectively. However, as Qingdao Skipper Chris Kobusch explains, this does not mean the teams can get complacent, saying: “Leg 2 is coming to a close end and as it looks these last few days will decide if we get in fourth or eighth. A tight finish once again.”

Sitting behind the leading pack is GREAT Britain in seventh place, which is now drag racing eighth placed HotelPlanner.com to Cape Town. Skipper of HotelPlanner.com Conall Morrison explains: “It is too easy to sound like this race is over but we have been struggling to find the boat speed of the leaders on this leg, our focus remains on doing our best to catch GREAT Britain before the finish, and in keeping our sails and equipment in good order.”

With the race finish just around the corner for some of the fleet, the Skippers’ thoughts have been echoed by Clipper Race Director Mark light. Prior to Dare to Lead’s Stealth Mode activation at 18:00 UTC yesterday, Mark commented on just how close Race 2: Stormhoek Race to the Cape of Storms as been, saying: “It is a fantastic race with the first two boats being separated by less than three nautical miles after 3,000 nautical miles of racing… what a finish we are going to have into Cape Town!”

Further back, ninth placed Unicef is approaching the end of the Elliot Brown Ocean Sprint, but all twelve teams will need to await PSP Logistics’ completion before the bonus race points can be awarded for the fastest three teams. PSP Logistics is nearing the half way mark, but despite being further behind, the team is watching fleet progress with great enthusiasm. Skipper Roy Taylor says: “It looks like the lead pack are within a day or two of the finish and all still very tight up there, it must be nail biting back at home watching the Race Viewer”

Looking ahead, Clipper Race Meteorologist, Simon Rowell, explains that a front is sweeping quickly through the bulk of the fleet. Whilst it has eased a bit, teams may still get gusts into the low 40 knots, with squalls embedded into the mix.

For an idea of when the fleet is expected to cross the Finish Line, please see the Estimated Arrivals Time on the Clipper Race website.

You can follow Clipper Race Viewer to stay up to date on the fleet's progress. All positions were correct at time of writing.