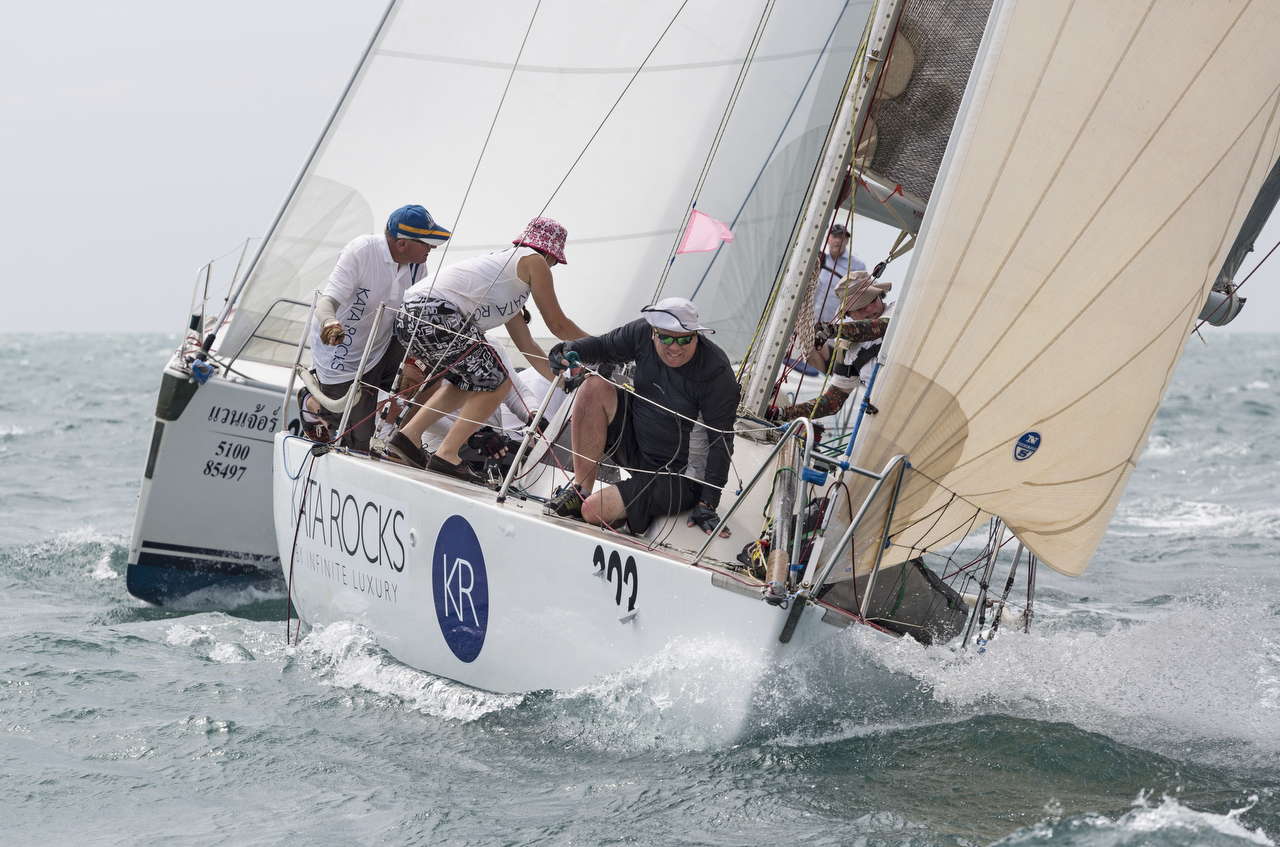 Racing was late starting today due to conditions dropping off on the last day of competition, but fortunately many classes had only one race left to run due to busy triple-header days earlier in the week.

This was fortunate, as today was really light – but enough air to bring proceedings to a close, at least for the racers; one race ran on the Racing course, while the cruisers were not able to sail today.

Tom and Kevin Whitcraft’s THA72 team was declared winner in the IRC 0 class, even though Windsikher took the bullet today. The Thai team’s early regatta indomitability ensured she was safe, despite her rivals’ late surge.

Australia’s Alive, skippered by Duncan Hine (owned by Phil Turner) was second fastest on the day, this being the final race (no. 12). Whitcraft’s team was third this afternoon, but had already done enough to be declared 2017 champions and successful defenders of the title.

“We’re happy with our performance given the light conditions. A bit weak today of course but we decided to just keep going. We were covering Team Hollywood and Windsikher was out to starboard to close the gap.

“We could have been more aggressive at the start and have things we can improve on. No complaints though, this is only our second Phuket King’s Regatta title and we’ve tried so hard for so many years before.

“Jaray is a great helm and has had a good career. We have a crew of 15 and nine of us are Thai nationals. We are now on a roll! We’re delighted that there is great continuity in the cup and things are going forward. We can look forward to another 30 years and make things bigger and better next year”.

In IRC1, Japanese team Karusu took the win ahead of Estonian entry Loco to conclude the 12th race on the final day. Yasuo Nanamori’s team suffered this week from a disqualification and two DNS (Did Not Start), leaving Otonomos Mandrake to take Regatta glory. Nick Burns and Fred Kinmonth were able to complete another King’s Cup Mandrake victory having been regatta regulars for many years.

Race Director Simon James said, “We’ve had a very successful regatta. We completed a full schedule for the racing boats. The bare boats and cruisers finished more races than ever, and it’s been very close.

“Conditions allowed us to give them a range of courses to suit their designs. We had excellent entries from China and Russia this year and great to see competitors coming back every year, with many sailors who have been at the regatta since the start.

“Larger boats take up past competitors into their crews, so we see a lot of the same people, even among the charters who keep coming back too. It’s great to see such fast-growing support from East Asia also.”

Peter Dyer and Kata Rocks (Madam Butterfly) topped a great week of racing with another win today in IRC2, claiming Regatta honours in the process. A further win for Thai entry Pine Pacific in Premier Class, and enough to seal victory for the week based on a final day win to put them ahead of Netherlands team King’s Racers skippered by Gijs van Liebergen.

In other results, Andy Pape and Multihull Solutions H3O were declared regatta winners in the one-make Pulse 600 class, sailors in which were probably relieved to have seen the strong winds of this week die down some.

The Pulse racers were running the large keelboat course, and at times had to contend with gusts of 25 knots on Tuesday and Wednesday. The boat remains a great option for developing sailors looking to progress out of dinghies.

Britain’s Thor (Henry Kaye/Fergus Wilmer) claimed the Multihull Racing class, with a definite schism between them and a chasing pack headed up by Asia Catamarans Java, which finished second overall. In the Cruising Multihulls, Mojo Multihull Solutions, skippered by Aussie Rick Fielding, was named winner of the big cats. Second was the familiar Da Vinci catamaran, this time serving as Chinese entry under skipper Zhang Yong Dong.

Bareboat Charter this year consisted of a fleet of 14, nine of which had Russian crews. Igor Ginzburg skippering Phailin capped off a good week, never finishing outside the top three in a competitive grouping.

Modern Classics played host to a nicely close field too (and some great photo opportunities for supporters), brought to a close at the end of the regatta with Java Yachting’s Mas Allegre, a 50-year old design chartered by Chinese team Mermaid. Russian Urii Firsov claimed the Cruising class on a boat called Uminoko, having already won five races this week.