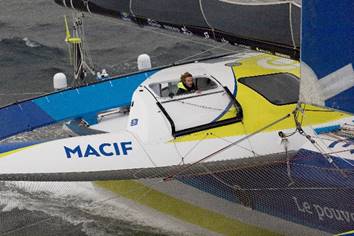 Often thought of as a particularly difficult section of the round the world, because of the combination of fatigue resulting from the Great South and difficult weather, François Gabart has lived up to his reputation on the sail up the South Atlantic.

After rounding Cape Horn on Sunday, the skipper of the MACIF trimaran sailed through a severe gale in high seas, before continuing with a ridge of high pressure and transition area, which meant slaloming between the small tropical low pressure systems coming in from Cabo Frio, east of Rio de Janeiro.

“It is true that the South Atlantic is one of the hardest areas. The challenges are different from those of the South Seas. You leave behind prevailing west winds to go in search of the south-east trade wind, and on the way, there is at least one transition and often quite a few. And in the beginning, you may have rounded Cape Horn, but you are still 45 degrees south.

“The low-pressure system last Tuesday resulted in very severe weather. I think that the wind was probably the strongest I have had, with a speed of over 50 knots. In addition, I was unable to furl my J2 (because of the J2 furling system problem) and this wasn’t very comfortable.

“It’s not quite like crossing the North Atlantic from east to west, but close enough. You find yourself facing these phenomena,” said François Gabart, on Friday morning during the radio session, before adding: “I remember that in the last Vendée Globe, this was where I managed to outpace Armel, but I had a really tough time of it. It’s the same again here. I have widened the virtual time gap between myself and Thomas, but it’s hard.”

After roughly 20 days in high latitudes in the south, where it is cold, Gabart is gradually returning to warmer climes, as he sails up the South American coast.

What does the thermometer read this Friday morning? “25 degrees centigrade – the temperature has climbed fairly quickly. The sky is very grey. I am leaving a stormy low-pressure area in my wake. I can still see the very dark clouds in the East that battered me about during the night, but if I look ahead, it’s a lot lighter, which is wonderful. I should pick up a more standard trade wind system during the day and the sky should clear up.”

After 34 days at sea, the time clocked up by the MACIF trimaran is still as impressive as ever. The lead over Thomas Coville’s record, a year earlier, has widened and now represents more than three days this Friday. And even if François Gabart feels latent fatigue, just watching his trajectory is preserving his motivation and boosting his morale.

“On more than one occasion, the weather has not been simple in the South Atlantic, but on average, it has helped get me to where I am now fairly fast. If I watch the chart and the time, it’s really amazing. I’m very lucky to have got here in such good time. Thinking about that feels good. When you see that you’re getting close to the finish in a really good time, it drives you on. I have never been so close to the finish!” Says the skipper of the MACIF trimaran.

As Gabart approaches the end of his fifth week at sea, arguably, he has been through the worst as far as the South Atlantic is concerned, since he should enter a trade wind system this Friday. Admittedly it is unstable, but that will enable him to turn the cranks on board and sail full ahead.

“I get the feeling that I am beginning to leave the difficult area. If that turns out to be true, I should be able to make a long starboard tack as far as the equator,” he explained this morning.

What is to come? “I hope that everything will work out okay in the doldrums. Normally at this time of year, if you enter from this side, you can sail a little further to the west. Then, now there is a high-pressure area on the way up the North Atlantic and it is well, situated in the Azores, which means that the trade wind will be fairly strong.

“This is reassuring, but it looks strong: the sea will be rough and there will be some rock ‘n’ roll. The weather towards the end is not at all clear. I had a look this morning. One time it looked as if it would work perfectly, the next time not at all, so I closed the screen! I hope that the overall success we have had throughout this round the world will continue.”

At this stage of the round the world, it is normal for the skipper and the boat to feel the wear and tear. On Wednesday, after the worst of the gale had passed, François Gabart had a look around his trimaran and felt reassured.

“She really hasn’t suffered any more than I had noted at Cape Horn. I’m really relieved, because she really went through a battering. It was hard, because I thought that she was going to be damaged, but at the same time, all I could do was make headway. If I had stopped, I would have risked getting caught in an even stronger wind coming in from the south”.

So, there is no further damage and Gabart will have a welcome ridge of high pressure on Wednesday, to carry out the planned repairs.

“I’m pretty up-to-date regarding equipment. I managed to rustle up a small protection on the J2 furling system, but this is still the weakest link. I will now need to keep an eye on wear. You can feel that parts are beginning to feel the strain, so I will have to be careful.”

“The same is true of the sailor, who after 34 days at sea cannot conceal the constant fatigue. “Like the boat, it’s nothing serious, but you feel that you are reaching your limit. With each manoeuvre, I’m aware that I’m not on form. It takes me much longer to recover.

“For example, after a manoeuvre, when you stowaway the lines in the cockpit, just lifting your arms to a horizontal position is tiring. This kind of standard movement becomes difficult. However, I have had no serious injury and that’s the most important.” This is essential even, for a sailor approaching the finish, but who is still aware that “there will be little relief until Ouessant.”