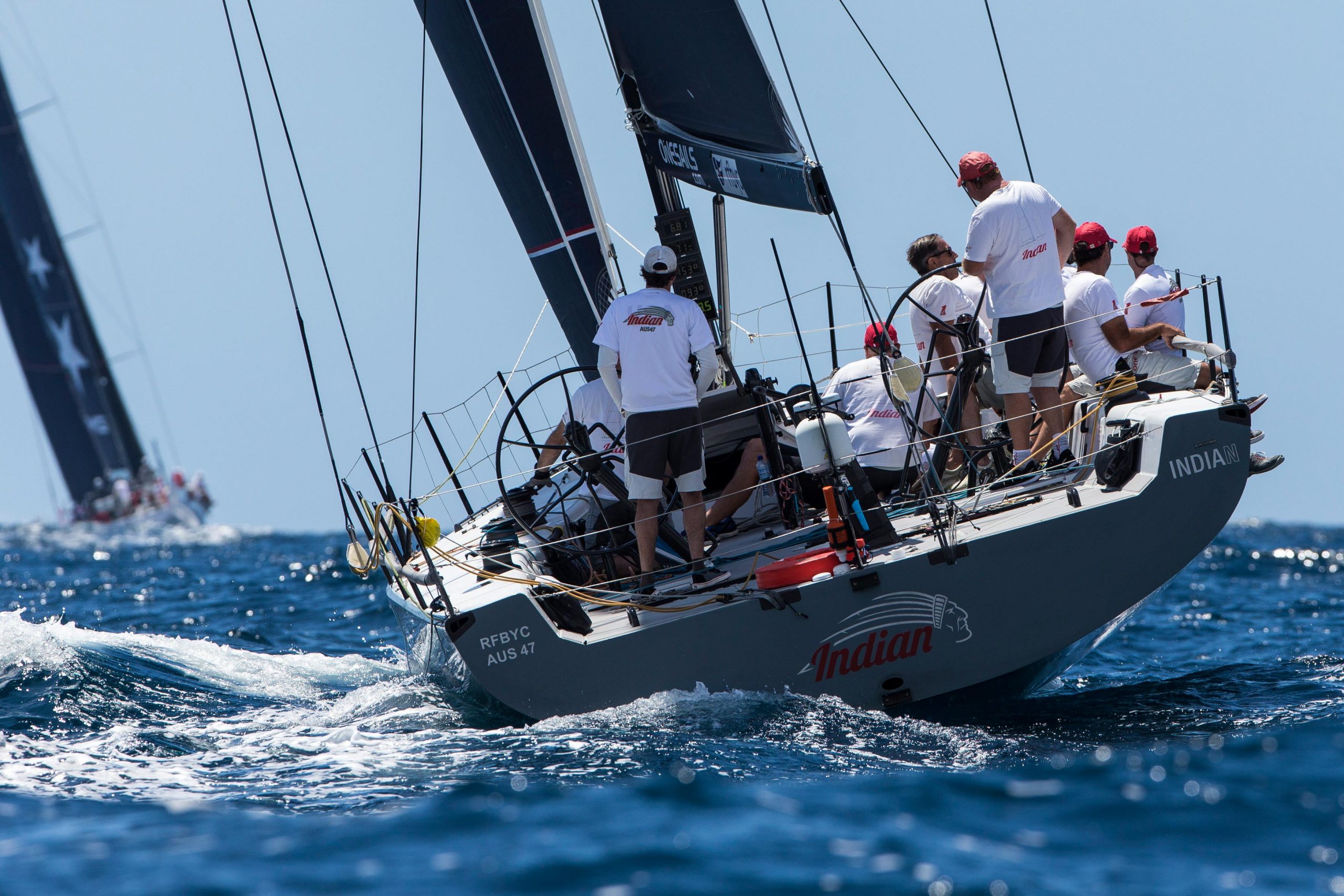 The sun was splitting the sky for the second and final day of the Cruising Yacht Club of Australia’s Trophy Series on Sunday, light airs providing another offshore test for the fleet of 20, many of which will race in the Rolex Sydney Hobart in a few weeks.

A lack of breeze meant a postponed start of 15 minutes but at 1115hrs the racing was underway with the two supermaxis, Wild Oats XI and Black Jack heavily engaged in a tense game of cat and mouse. Beau Geste enjoyed a fantastic start on the northern side of the track but it was Black Jack which powered out of the heads in front of Wild Oats XI, the positions the boats held for the remainder of the race.

Taking the win on IRC division 1 once again was Tony Kirby’s Ker 46, Patrice, ahead of Craig Carter’s Carkeek 47, Indian, and Ting Lee’s TP52, DeRucci. Those results reflected in the final series standings for division 1 as well.

After three years of competing in the race, Indian’s owner Craig Carter was especially delighted with a podium place, especially given the crew travel from Western Australia to compete.

“This is the third year we’ve done a Hobart so it’s our third CYCA Trophy Series but the first time we’ve won anything so that was the good news! The weather has been a bit funky of late but it was a great hit out this weekend. It’s important to get the tuning right ahead of the big race on Boxing Day.”

“To do the Hobart from Perth, it’s easier to do it from New Zealand. It’s an enormous commitment from the team and the crew. Ten of us live over in WA, we fly in on a Thursday night and out on Sunday night so we’ve a busy schedule.”

“We always enjoy the series and the CYCA do an amazing job with organisation and execution.”

On PHS it was Les Goodridge’s X50, Wax Lyrical, top on Day 2 with the boat also claiming the overall series win ahead of Ian Prentice’s Archambault 40, Nautical Circle, and Steven Proud’s Kernan 44, Swish.

Speaking after the race Goodridge commented, “It was very good result. We had a really good race yesterday and then today the breeze was just right for that sail combination. We were a bit lucky but that’s the game.”

“We aim to go as fast as we possibly we can every time we go sailing and today was a fabulous day of sailing as part of a good little series.”

“It’s been a great chance to check out a couple of things ahead of the big race even though we only had two thirds of our Hobart race crew on. Still a fantastic weekend.”

In the battle of the supermaxis it was Black Jack’s day as the Queensland boat led Oats XI from start to finish. After spending the previous race in the back seat, Black Jack’s owner Peter Hamburg was a delighted.

“It’s really easy to be happy when you’ve had a win. These big boats if you get a good start and you’re leading on short courses it’s very hard to overtake the front boat. Winning the start is terribly important and I guess we got a bit luckier today.”

“It was another good test for the boat, we sailed pretty well. The wind speed today was potentially more into Oats’ territory today so very satisfying to get the win. Somewhat ironic that they beat us yesterday in what was probably our preferred wind conditions, but I think it shows just how close the boats are. I don’t think anyone is superior.”

“Every time we are on the boat sailing we benefit from it. We learn. That’s especially true when you’re competing against another as we have been this weekend and will again on Tuesday.”

On Tuesday, 12 December Wild Oats XI and Black Jack will face off for the final time before the Rolex Sydney Hobart when the battle in the CYCA SOLAS Big Boat Challenge in Sydney Harbour, also featuring Beau Geste and Wild Oats X.