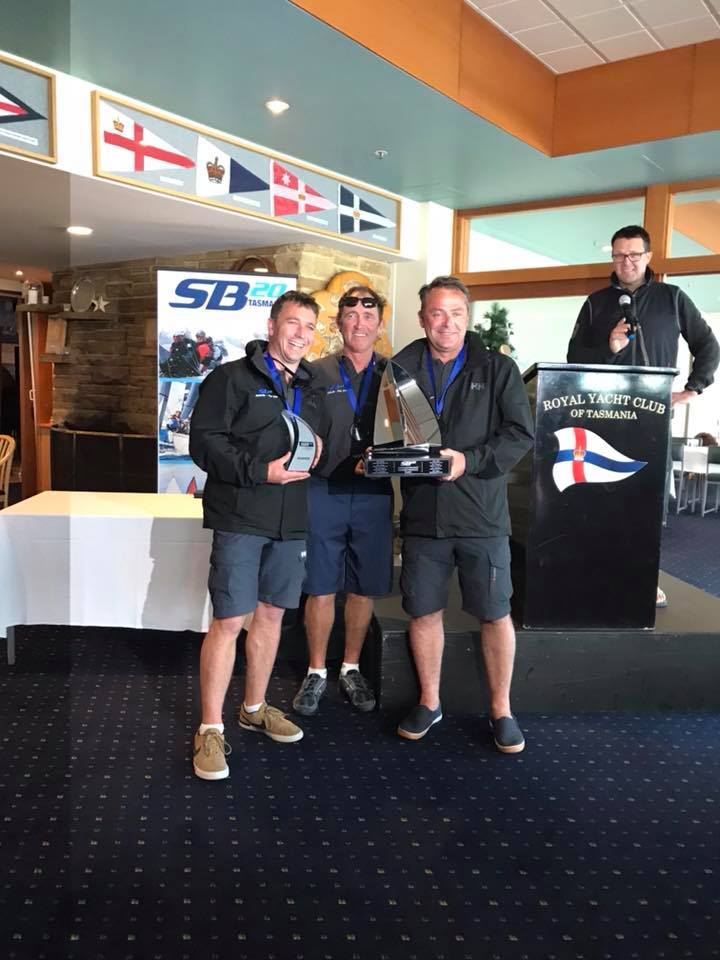 In just on a month’s time Hobart yachtsman Brett Cooper and his talented crew of the SB20 Aeolus will be lining up on the River Derwent as one of the local favourites for the World championship in this spectacular one-design sports boat class.

Cooper and his crew of Darren ‘’Twirler’’ Jones and Nick Corkhill yesterday underlined their World championship prospects by scoring a convincing overall victory in the SB20 Australian championship on the Derwent.

Gough finished with a net 36 points, his worst place a ninth, while Rogers outsailed the fleet in race nine yesterday to finish with 37 points. Just one point back came 2017 SB20 world championship runner-up Michael Cooper with Export Roo, who won three of the ten races, finishing the regatta with a spirited win in the last race. A 20th place in race nine probably cost Export Roo a podium finish.

Safe and sure crew work and smart tactics, as well as top class helming in close encounters were the key factors to success in this fleet, with sail handling on the near-planng spinnaker runs resulting in many changes of positions in fleet.

Brett Cooper’s crew regular Nick Corkhill and international sailor ‘’Twirler’’ Jones, a six times world champions sailor in the Mumm 30 class, certainly proved a major factor in their success. Jones, born in Hobart, was an inductee into the Tasmanian Yachting Hall of Fame in 2016.

Hobart’s SB20 fleet is one of the biggest in the world and the current and future depth of talent was evident in the four day racing by the 36 boat fleet, which included five women’s teams and four youth crews.

The Women’s championship was fought out by two crews from the Athena Sailing women’s group, Fire of Athena (Clare Brown) beating Pride of Athena (Colleen Darcey) by two points.

Nick Rogers, the founder of the SB20 class in Hobart, was declared 2017 Masters champion while the Corinthian Trophy was won by David Graney and his crew.

The SB20 World championship will be conducted jointly by the Royal Yacht Club of Tasmania and the Derwent Sailing Squadron from 8-11 January, preceded by a pre-Worlds Regatta. A fleet of more than 60 boats is expected, including 20 from overseas, among them the current World champion Jerry Hill who beat Tasmania’s Michael Cooper by just two points at Cowes, England last September.