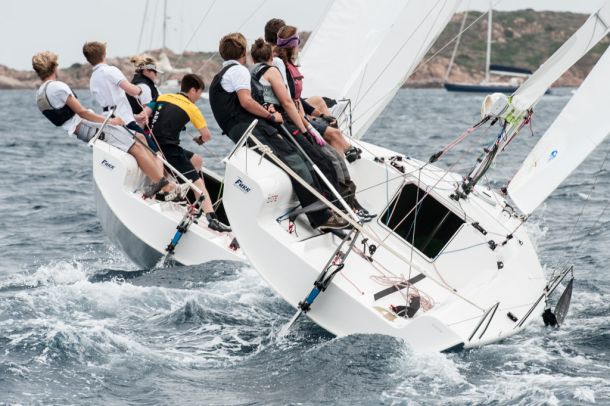 Porto Cervo, 4th July 2014. The second day of the Invitational Team Racing Challenge saw the eight competing teams complete the first round robin with the Royal Thames Yacht Club coming out on top with six wins out of seven. In a change to the original format – result from a request by participants to maximize the number of races run on the waters of the Costa Smeralda – racing then continued in the second round robin. Due to the light easterly wind dying out in the early afternoon, however, only four matches in the second round were completed before the breeze failed completely.

Following Royal Thames in the classification for the first round robin were Italy's Circolo Canottieri Aniene, the Norddeutchser Regatta Verein of Hamburg and the home team representing the Yacht Club Costa Smeralda, all of whom claimed 5 victories over the seven races run. With just 4 matches run today, all is yet to be decided in this inaugural team racing event organized by the Yacht Club Costa Smeralda.

Tomorrow will therefore be a decisive day, as well as a busy one for the 16 crews who will be looking to complete 13 flights and, time permitting, finals. It seems like the wind Gods will collaborate with 16-18 knots of the famed Sardinian mistral wind predicted, along with sunshine and blue skies.

Teams will be relaxing this evening at a Gala dinner at the YCCS Clubhouse and will be back on the race course tomorrow, Saturday 5th July, at 11.30.

The Preliminary Results and full event details are available on www.yccs.com.