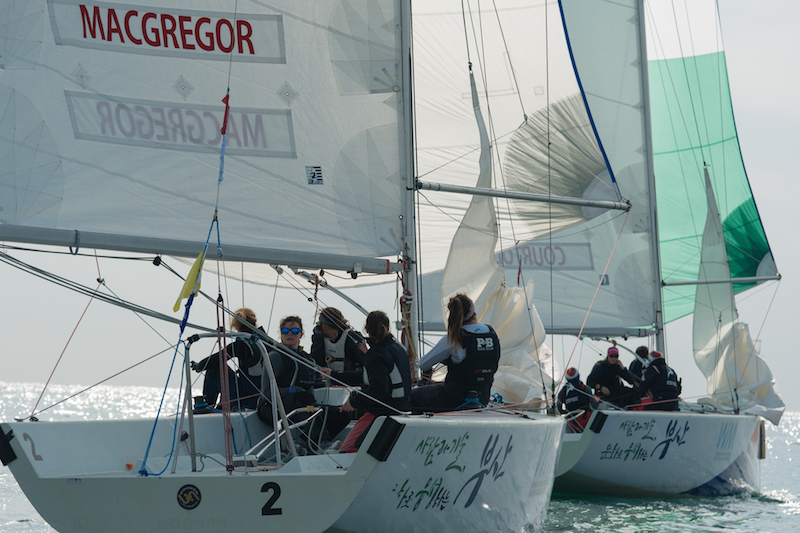 Weather has really been the dominant story this week at the Busan Cup Women’s International Match Race, the third event of the 2017 WIM Series, and he fourth day was no different.

With a forecast predicting light winds early, before shutting off later, the race committee got an early start with the goal of completing the quarter-finals and semi-finals. Alas, the wind gods got the better of the mortals and racing ended before the whole semi-final program was completed today.

Trine Palludan and her Danish Team Kattnakken team continued their winning ways, defeating the young Australian team, skippered by Sarah Parker, to remain undefeated and earn the right to choose her semi-final opponent.

When asked about her choice, Palludan commented: “It was a very difficult pick – all three teams are very good. We picked Team Anna (Anna Ostling – SWE), because we thought we would rather face her today in the light wind, as we are quite fast in the light.

“The key to winning in the heavy air is good teamwork and Team Anna has very good teamwork since they have sailed together as a team so much, so we would rather face her in the light.”

In the semi-finals, the focus was on speed, as Team Kattnakken’s tactician Josefine Boel Rasmussen said: “We really focused on our trimming and going fast in the light winds. Adjusting all of the time.”

That tactic seemed to work, as the Danes defeated the Swedes 2-0 to advance to the finals and remain undefeated through 14 races.

In the second semi-final, the Anglo-French rivalry between Lucy Macgregor’s Team Mac and Pauline Courtois’ Match in Pink by Normandy Elite Team was alive.

The two teams were very evenly matched throughout, with the boats never getting more than a few boat lengths apart.

Macgregor described winning the first race: “We had a really good first match against Pauline. It is always fun sailing again her team. We led off the line and managed to stay in front, but it was really stressful as she kept it close.”

But Courtois fought back: “The girls did a very good gybe and we passed Lucy and then we stayed in a little more wind. The finish was very close and we won.” This evened up the score 1-1 with one more match to decide who would face Team Kattnakken.

Unfortunately the wind won the third match in the Macgregor-Courtois semi-final and was abandoned on the first leg when it evaporated.

“We did the best we could today. For tomorrow we have two different forecasts, but both of them show lots of wind – one has maybe 14-18 knots and the other shows 18-20, with gusts over 25 knots. As usual we will do everything we can to have a memorable conclusion to the 10th edition of the Busan Cup,” said a hopeful Regatta Director, Alfredo Ricci.