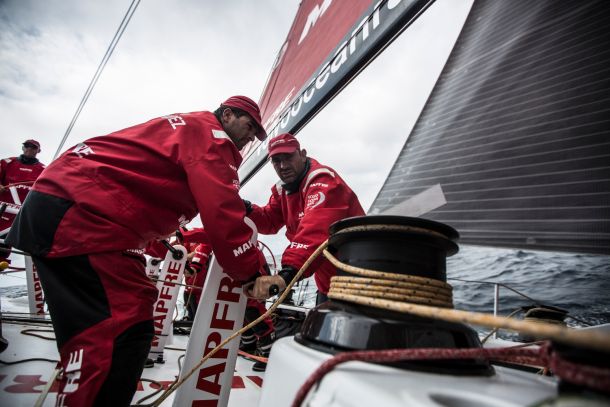 SANYA, China, February 11 – Team SCA (Sam Davies/GBR) and Team Brunel (Bouwe Bekking/NED) have taken their courage in their hands with a push north for more wind in Leg 4 of the Volvo Ocean Race as the fleet entered the Pacific Ocean on Wednesday.

The two crews must wait around a week to discover if their tactics to head towards Taiwan – in apparently totally the wrong direction – have paid off. Early indications are that they could earn rich dividends on the 5,264-nautical mile (nm) leg from Sanya, China to Auckland, New Zealand.

The pair have taken a wider arc, further north, after exiting the Luzon Strait between Taiwan and the Luzon Island of the Philippines.

It is a ‘fast lane’ route that will mean that they will sail roughly 300nm longer than their four rivals, but they are banking on better wind to propel them clear. Eventually.

“So far, the weather models say they have got it right, but it will be six or seven days – or even more – before we know for sure,” said the race’s official meteorologist, Gonzalo Infante, on Wednesday.

At 0955 UTC, the multi-national women’s crew and the Dutch team still trailed early leg pacesetters, Abu Dhabi Ocean Racing (Ian Walker/GBR), by some 120nm, but were already making inroads into that deficit.

Infante added that the fleet would probably converge in the north Pacific Ocean in over a week’s time. “The danger for Team SCA and Team Brunel at that point will be as they enter a stretch of Doldrums, which can be random,” he said. “But they could well end up in a very strong position by the time they reach the South Pacific.

“This leg is seeing more of a split in the fleet than we’ve had before.”

The four-strong main pack is currently led by Walker’s second-placed crew, with MAPFRE (Xabi Fernández/ESP), Team Alvimedica (Charlie Enright/USA) and race leaders Dongfeng Race Team (Charles Caudrelier/FRA) chasing hard. They are grouped within 4nm of each other. They have around 4,700nm to the finish.

Mercifully, the sea state, which had been churned up by currents and winds running in roughly opposite directions in the South China Sea causing widespread seasickness, has been less uncomfortable for the crews in the past 12 hours.

Team Brunel’s Onboard Reporter, Stefan Coppers, summed up neatly: “Imagine being on a roller coaster over 60 hours consecutively – that is more or less the feeling. You want it to stop, but there is no way out.”

Computers predict an arrival into Auckland around March 1.