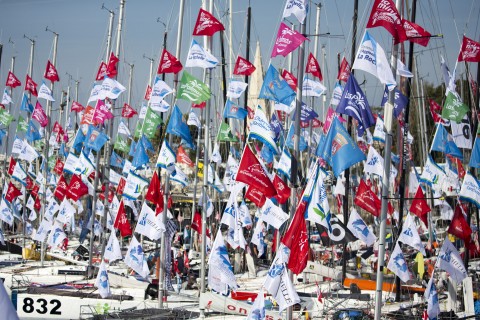 A magnificent setting for anyone dreaming of escape, who live for the thrill of the open sea. Port Olona, with its high-quality infrastructures, the infamous channel that so many great sailors have sailed through, the south-facing bay and the Atlantic ocean landing its waves to the expansive beach… For years, Les Sables d’Olonne has offered a majestic backdrop for solo ocean racing and its most distinguished yachtsmen and women.

“Les Sables d’Olonne is the stage for the most prestigious sailing competitions. A magnificent setting and infrastructures to host and experience the greatest of maritime adventures. In Les Sables d’Olonne, we live for the sea; and we are proud to share it with the world.

“Our companies, clubs and associations are wholly committed to the excellence and influence of our sailing networks. While an incredible edition of the Vendée Globe has just come to an end, our town is now getting ready to bring you the next unmissable events in single-handed ocean racing.

Yannick Moreau, Mayor of Les Sables d’Olonne and President of the Agglomeration.

Races, accomplishments and a host of emotions

Over the years, the Vendée town has become the world capital of solo ocean racing, the place where the greatest contemporary maritime adventures have unfolded. The Vendée Globe, with the most recent edition being the most closely followed in history despite the health context, is testament to this. The most prestigious IMOCA race, for which the official prize-giving ceremony will take place on 22 May in Les Sables d’Olonne, will be held again in four years’ time, setting off in November 2024.

In the wake of the Vendée Globe, a number of events have become essential in the ocean racing calendar: the Mini-Transat, the Golden Globe Race, but also the Solo Maître CoQ, Les Sables-Les Açores and Les Sables-Horta. They all have Les Sables d’Olonne as their home port.

The Mini-Transat and the Golden Globe Race on the horizon

The Mini-Transat is the flagship event of the Mini 6.50 Class, where the 6.50 metre sailing boats will cross the Atlantic to reach Guadeloupe without assistance. This race, which will start in Les Sables d’Olonne for the next three editions (September 26, 2021, 2023 and 2025), has become a must for all amateurs who dream of being the champions of tomorrow. Yannick Bestaven (2001), Armel Tripon (2003), Thomas Ruyant (2009) are among those who have put their name to the list of winners before taking part in the last Vendée Globe.

One year after the Mini-Transat, Les Sables d’Olonne will host the second edition of the Golden Globe Race. This is a non-stop, single-handed, round the world race, and notably – one without the aid of modern technology – to rediscover the pioneering spirit of the Golden Globe Challenge, which took place in 1968. With sextants, compasses, charts and marine radios, the participants will try to emulate the performance of Jean-Luc Van Den Heede, the winner four years ago after 212 days at sea.

A community geared towards the ocean

Like Van Den Heede, many sailors have chosen Les Sables d’Olonne as their home port. They live in the town, preparing for their future adventures at sea, and have a special place in the hearts of the “Sablais” people. The Institut Sports Océan, the Sports Nautiques Sablais, Les Sables d’Olonne Vendée Course au Large, and dozens of sailing and water-sports schools and sports clubs in the town also contribute to the development of the great skippers of tomorrow.

With the sportsmen and women geared towards the ocean, the local economy is also inevitably part of this dynamic. As the leading yachting and fishing port in the Vendée, Les Sables d’Olonne is home to four shipyards, equipment manufacturers, innovative start-ups, a campus for maritime professions and numerous business parks. This nautical sector also contributes to the appeal of the town, as the department’s 2nd largest employment provider.

What’s more, Les Sables d’Olonne is the leading tourist destination in the Vendée, thanks to its seaside heritage and the diversity of its coastline. The town has 112,000 tourist beds and tourism in the region generates a total turnover of 361 million euros per year. With its beaches, its cliffs, the diversity of activities on offer and the welcoming nature of its inhabitants, Les Sables d’Olonne has all the assets to become the capital of single-handed ocean racing in the long term and to remain an essential place for all lovers of the sea and the oceans.