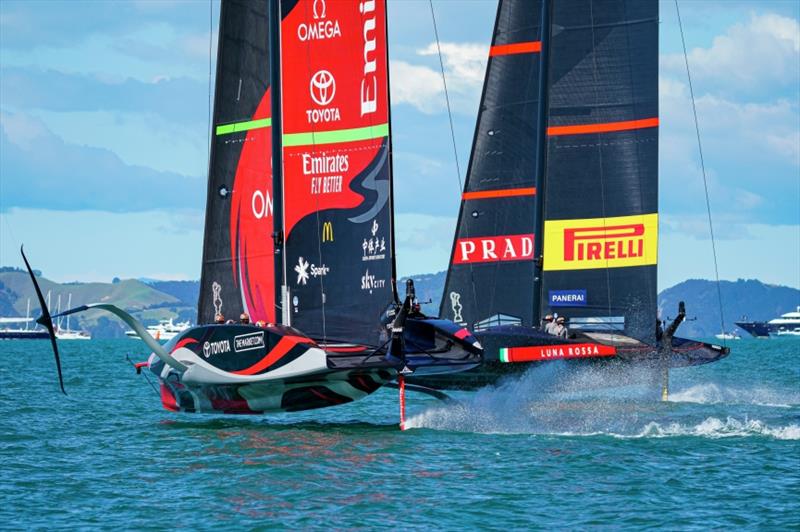 After a one-day break, racing resumed in the Match for the 36th America’s Cup presented by Prada and conditions were light, with a northerly 8-10 knot breeze throughout the afternoon.

In the pre-start of race one, Luna Rossa managed to gain control on her opponent and positioned herself windward, moving fast and crossed the line on starboard tack with perfect timing. The Italian boat accompanied the Kiwis to the left boundary and then tacked to protect the right side.

From this moment, the race was conducted in a control mode without ever letting go of the opponent, barring a couple of occasions but without taking risks. The advantage increased at each gate, with 10 seconds at the first, then 13, 27, 22 and 38, notching up a 37-second lead at the finish line.

In the second race, Luna Rossa tried to repeat the pattern similar to the first start, but the Kiwi boat was ready with a burst of speed that allowed her to gain a few metres and stretch her advantage. The Kiwis maintained and increased throughout the six legs. At the finish line they went on to win the race with a 1:03 minute advantage.

The second day of racing closed with a tie, with a score of 2 to 2.

Two more races are scheduled for Saturday. With the return to Covid 19 Alert Level 1, the Race Director will now have the option to use the racecourses closest to the coast.

Luna Rossa’s helmsman, Francesco Bruni said: “It’s been a good day, it ended again with one point for each of us. We sailed very well in the first race, with a good start, but in the second race the start was not as sharp and didn’t allow us to stay on starboard tack. Also, we made some mistakes in manoeuvrers that didn’t allow us to keep the match open. In any case it was