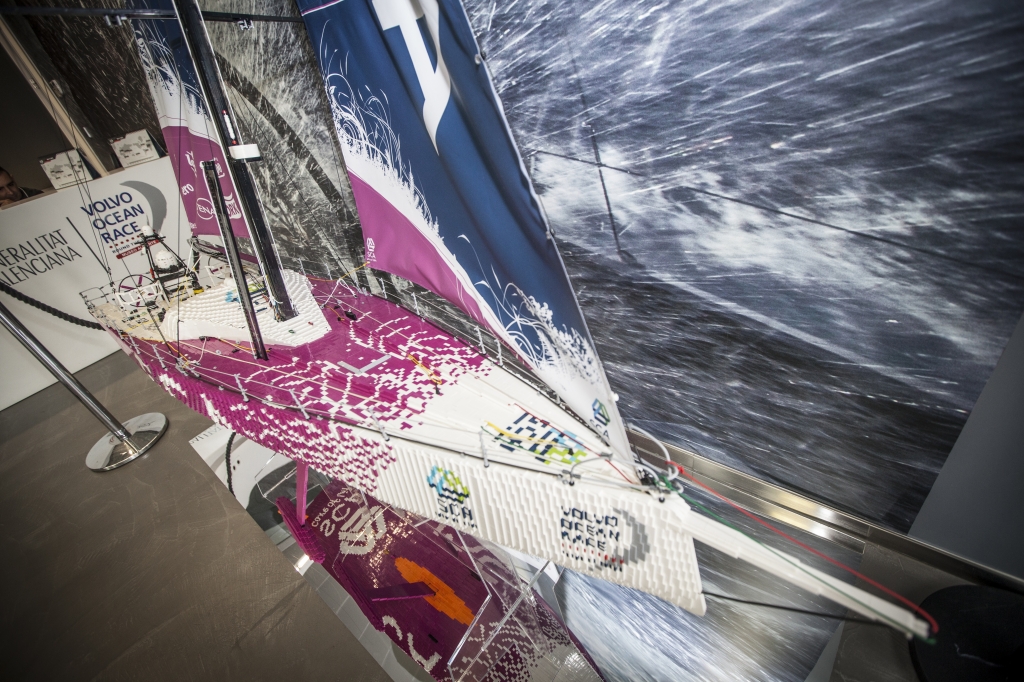 A model boat of Team SCA, made entirely of 100,000 LEGO® pieces, will be exhibited in the Volvo Ocean Race museum from today.

The launch of the Volvo Ocean 65 replica boat, which safely delivered the all-female crew of Team SCA around the world in the 2014-15 race, coincides with International Women’s Day.

The model was donated by SCA, the Swedish global hygiene company, which sponsored skipper Sam Davies’s crew in the nine-month marathon race.

It was displayed at each of the 11 ports that hosted the 12th edition before being transported to its new permanent home in the Alicante-based Volvo Ocean Race museum.

“The boat is in the best place possible. After a long journey around the world, it has returned home,” said Anders Gaasedal, one of the men who constructed it.

The Dane, who works for LEGO®, embarked in 2013 on the challenge of making the Volvo Ocean 65 replica together with his Swedish friend Johan Sahlström, an engineer for Volvo Trucks. They achieved their target after 1,200 hours of work.

“At the start of the regatta, we dreamed of bringing the boat back to Alicante. This has been an adventure for us and for Team SCA. It’s marvellous that the boat is being exhibited in the museum. The more people who can enjoy it the better,” added Sahlström.

What started as a diverting challenge for two friends, developed into a complete engineering and logistic project, replicating in miniature the dimensions of the boat (2.32 metres in length, 3.03 metres mast height, 0.56 metres width of the hull). It has a functioning, scaled-down keel (+/- 40 degrees with five degrees of tilt from its axis).

“Everything works, the pieces are not stuck together. The most difficult thing was making everything curve using pieces that are basically rectangular. This is most beautiful model that I have ever made,” said Sahlström.

“Our boat from the distance looks like a real model, you can´t see it´s made of LEGO® bricks, and then, when you come closer, it´s a great surprise. Everything has curves, it´s been built in 3D, the bricks have been put together from the top, the side and the bottom, and all is shiny. Children always build from the bottom to the top.”

The Volvo Ocean Race museum, which offers free entrance, welcomed more than 50,000 visitors in 2015 and is the only one in the world dedicated to almost 43 years of history of the round-the-world race.

Alicante, headquarters of the Volvo Ocean Race organisation since 2010, was the departure port in the last three editions of the race and will be so again in the next event starting in 2017.

SCA has a long record supporting women's causes around the world and Team SCA's entry in the last Volvo Ocean Race underlined their commitment to the issue of female empowerment.