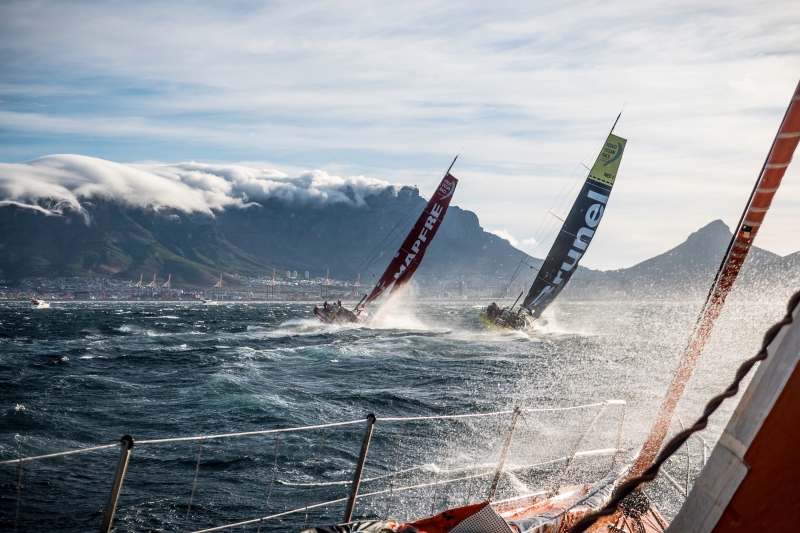 The Volvo Ocean Race 2017-18 shifts into a new phase on Sunday with the start of Leg 2, a 7,000 nautical mile three-week, marathon leg to Cape Town, South Africa.

It’s a tough leg, as the teams transition from the North Atlantic, through the Doldrums, into the trade winds and may even dip a toe into the Southern Ocean before the finish in Cape Town, which has already been a stopover host 10 times.

The tactical options on the leg have been opened up this year by the removal of a traditional waypoint, the island of Fernando de Noronha, about 170 nautical miles off the coast of Brazil.

While teams often sail as far west as this to pick up the tradewinds earlier, it adds hundreds of miles to the route to Cape Town. Without this island as a mark of the race course, the shorter, but normally slower option of sailing further east, down the coast of Africa, may be in play.

“It’s a very interesting one, maybe more interesting than in the past,” said Charlie Enright, the skipper of Leg 1 winner, Vestas 11th Hour Racing.

“You usually have to go nearly all the way t I think (taking out the waypoint) changes things a lot,” said Sun Hun Kai/Scallywag skipper David Witt. “I think this will be an interesting leg and I think you might see the biggest split you’ve seen for a long time in the Volvo Ocean Race. But we’ll see what happens.

“For sure you can go more east,” agreed Dongfeng Race Team skipper Charles Caudrelier. “The difference is huge, but it’s a danger (tactically). It’s always a balance and it’s always difficult to know where to go. It will be a nightmare for the navigators.

“Let’s see. Hopefully the others will go the short way and we’ll keep going west,” said Xabi Fernandez. “It’s hard to know. It will be busy for (navigator) Juan Vila. But we trust his instincts and his work and hopefully we have a good crossing of the equator.”

“It’s a leg of 21 or 22 days with technical decisions to make every day,” said Simeon Tienpont, the skipper of team AkzoNobel, who has added the experience of Chris Nicholson, Jules Salter and Peter Van Niekerk to his crew for this leg.

In contrast, for many of the rookie sailors spread across the teams, Leg 2 will be the longest they have been at sea, and a new experience of true offshore sailing.

“We have crew on board who have never been at sea for longer than six or seven days at a time,” said Turn the Tide on Plastic skipper Dee Caffari, who is shepherding some rookie offshore sailors through their first big ocean experiences on this leg. “So they will be on a steep learning curve.

“This is the first one where you get a little taste of everything.”

Bouwe Bekking, sailing his eighth Volvo Ocean Race as skipper of Team Brunel, will take World Sailor of the Year and reigning America’s Cup winning skipper Pete Burling on his longest offshore sojourn, including a first Doldrums crossing that traditionally calls for a visit from King Neptune.

“We’re racing, but this is part of the tradition of the race, and that’s important,” Bekking said. “Someone like Peter Burling, there will be some nice footage of him, probably with a Mohawk haircut or something like that… We have some extra items on board so that Neptune welcomes these guys properly.”

But first there is the start, including an inshore leg up the Tagus River to the Lisbon city front, before the teams break to the Southwest for a drag race down to the warmer latitudes. The forecast is for 15 to 18 knot northerlies on Sunday afternoon – it should be a fast start.

The first long leg of the 2017-18 edition – a 7,000nm Atlantic dive from Lisbon to Cape Town – begins on Sunday 5 November. With a leg projected to take the fleet around 21 days to complete, a solid start is key – and the boats will battle for every inch as they leave the Portuguese city after a third consecutive stopover.