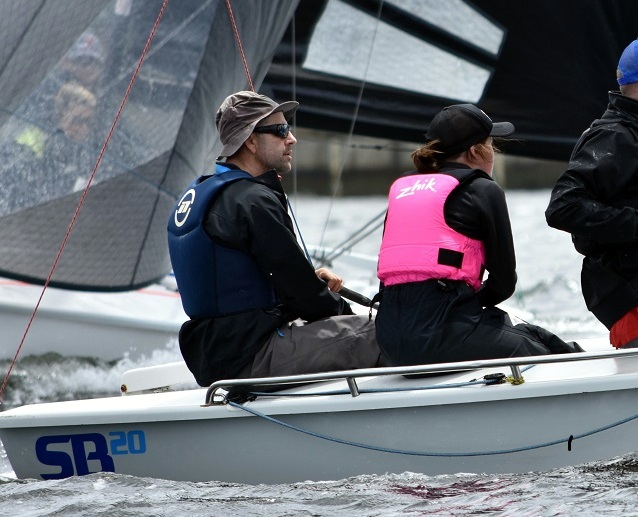 Hobart businessman and champion sailor Rob Gough is emerging as one of the strongest local contenders for the 2018 World championship for the SB20 one-design sports boats.

Gough yesterday steered Difficult Woman to an impressive overall win at the hotly contested BMW Showdown regatta on the River Derwent where the Worlds will be sailed next January. A champion sailor in a variety of classes, Gough swept to victory on day two of the BMW Showdown with three wins and a second. On Saturday he had a win and a sixth, giving him a net 6 points.

Sailing as part of Gough’s crew of Difficult Woman yesterday was Team New Zealand America’s Cup sailor Ray Davies who, like Gough, is a foiler Moth sailor. Davies had flown in from Auckland for the weekend to watch Rob sail his SB20 and give some feedback. However, on Friday regular crew Nick Dineen and his wife had their second and Ray jumped Difficult Woman to join Stewart Gray and Claire Cunningham to win the BMW Showdown.

In contrast to Saturday’s wild sou’westerly winds, reaching 30 knots, day two for the 100 off-the-beach and one-design keelboats was sailed in a light to moderate breeze that swung from east-north-east to a south-easterly in early afternoon requiring course resetting.

The perennial Sabot junior dinghy required a countback of placings over eight races to decide the winner, with victory going to Daniel Maree, sailing Loose Cannon, from Ruby Edmunds, steering Not Today! from the Port Dalrymple Yacht Club at Beauty Point on the Tamar River. Both finished with a net 14 points, but Daniel had four first places to Ruby’s two. Third place went to Ruby’s brother Taylor, sailing Whisper.

Sailing conditions were certainly easier for the high-flying 29er and B14 skiffs with close racing in both classes.

Will Wallace steered Jeff to overall first place after a regatta-long duel with Jasmin Galbraith in Don’t Tell and her brother Ethan, sailing Skiffy.

The B14 crews used the Showdown as part of their peroration for their Worlds at Beauty Point later this year, with first place going Kirsty Gray steering Pinky and The Brain.

Oscar O’Donohue, one of four siblngs contesting the BMW Showdown, won seven of the eight races, sailing Grit in Optimist Open class. His other result was a third in race seven, beaten by overall runner-up Eddie Reid in Sponge Boat.

In the Optimist Greens, Lawrence Jeffs in Fear Knot started with four straight wins, but then had a battle to the finish with Harry Gregory (Iki Moku) and Fishmo (Otto Newstead)

The International Cadet class produced another fine performance with Archer Ibbott and his crew unbeaten in Little Devil.

The Bic Open sailboarders came from Lauderdale Yacht Club to test the waters of the Derwent. Saul Davidson (Open Bic) won the regatta by three points from Lucas Keady (The Incinerator).