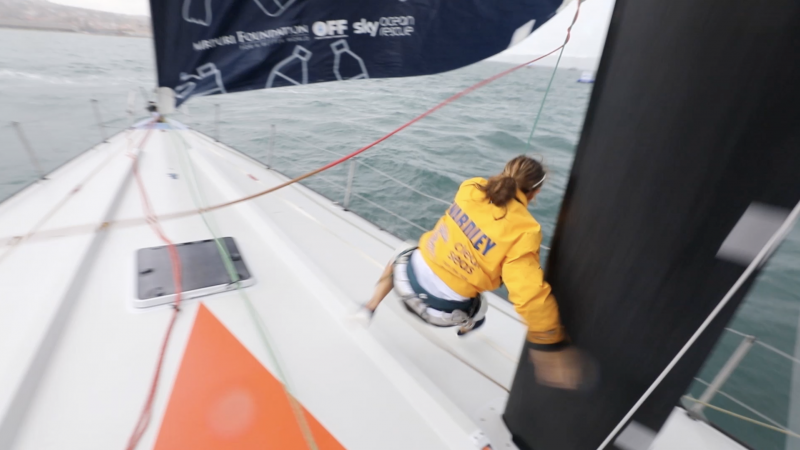 In an explosive Mirpuri Foundation In-Port Race in Lisbon, 'Turn the Tide on Plastic' sailor Liz Wardley had a lucky escape when her leg got caught in a rope while racing, which resulted in her being dragged at great speed across the boat.

Australian Wardley was quickly rescued by her teammate, Henry Bomby, and Onboard Reporter Sam Greenfield, but was left badly bruised.

“The conditions of today's race were challenging, we were sailing at about 14 knots when Liz caught her leg around one lap of the sheet, the guard wire and another line that goes over – basically it was caught between three things,” skipper Dee Caffari said.

“The whole thing happened very quickly, she shouted and I quickly ran forward not knowing what was wrong, but soon guessed that it was a bad situation. Liz's leg is pretty bruised – there was enough load to do some damage. We had to get her leg out of the guard wire and take the loop off. I'm just glad she's okay.”

The In-Port Races are scored separately from the ocean legs but the series is used as a tie-breaker in the final point’s tally, so teams will take the discipline very seriously. The races themselves are short, action packed and held as close as possible to land. Winning the start is often the key to victory and in today's race; skipper Caffari was disappointed with the team's result.

“Four laps, short course, really intense. First lap was absolutely glamour, second lap still on the podium and still fighting, third lap was full of disasters and fourth lap was just a write-off,” Caffari explained. “We crossed the line eventually but we had sailed ourselves from first to last.”

The start of Leg 2 of the Volvo Ocean Race from Lisbon to Cape Town will start on Sunday 5 November at 14:00 UTC.