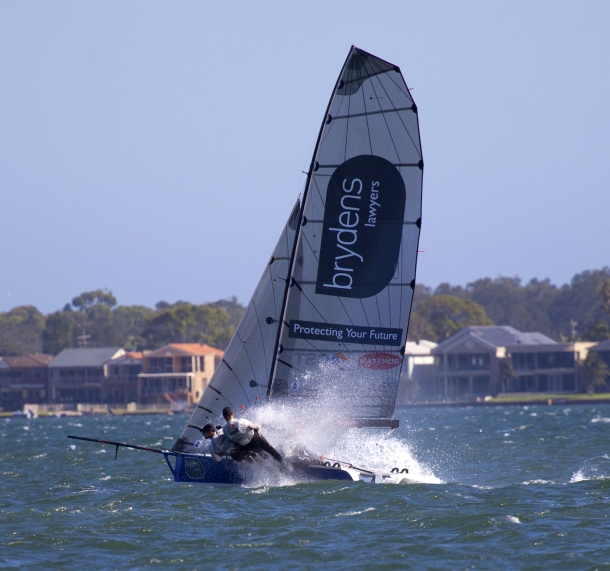 Not even a broken mast in the final heat could stop Manly's Brydens Compensation Lawyers from claiming a comprehensive win in the 2015 Australian 16ft Skiff Championships at Belmont.

“It was a blessing that we'd done enough earlier to ensure the broken mast didn't cost us,” Bridge said.

“We had a solid start to the regatta and from there we just sailed consistently.

“It was very special win for many reasons.”

It was Brydens' third straight national crown and Knapton's seventh title overall, making him the most successful skipper in 16ft skiff history.

For Bridge and Mackie it was a fourth Australian championship.

“Winning at Belmont on Lake Macquarie was special to me as it was my backyard as a child growing up,” Bridge said.

“I have many fond memories. It's where I learnt to sail and where I did all my junior sailing and where my appetite for skiff sailing began.

“We all worked really hard for this and that hard work paid off when we most needed it.”

The modest Knapton added: “These guys make my job easy. We don't do it for the records but it is something we can look back on with great pride.

“We didn't have everything all our own way but we raced consistently and that was the key.”

The next best-placed Manly boat after Brydens was Fire Stopping (Joe Turner) which came in fourth.

Manly also enjoyed success in the 13ft division, with Bridgestone, sailed by Natasha Ivshenko and Matt Stenta, producing placings of 2-2-11-1-1-1-2 to clinch the title.