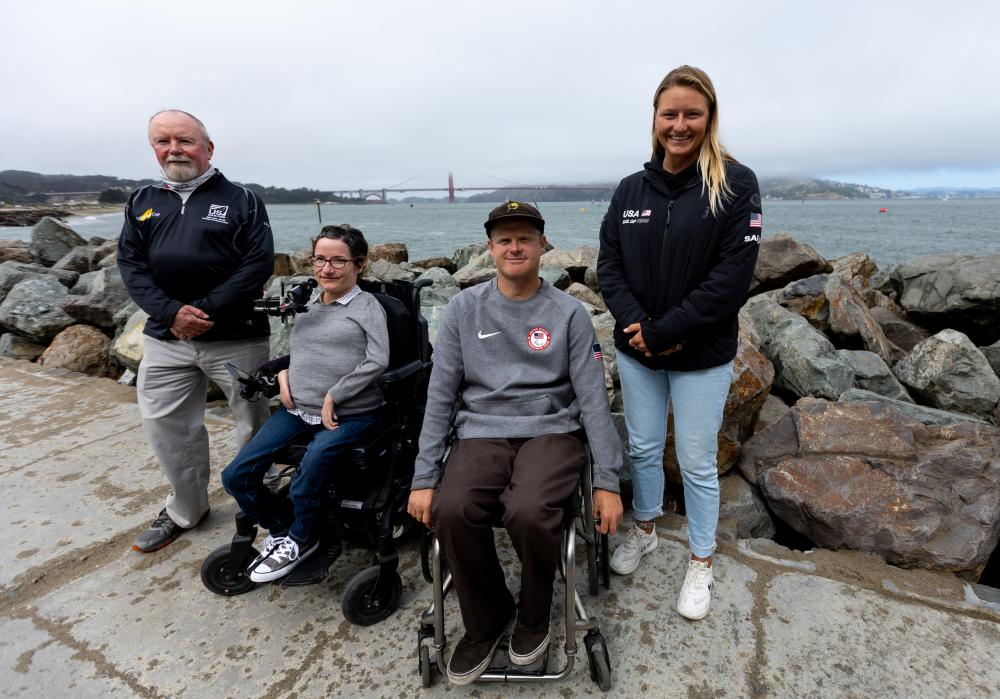 Inspiring stories of athletic ability, perseverance, and skill were the order of the day at the St Francis Yacht Club in San Francisco when World Sailing gathered three USA Para sailors to an exclusive meet and greet with national and international media during the Grand Finale of Mubadala United States Sail Grand Prix in San Francisco.

As part of its global campaign to reinstate sailing in the Paralympic Games for LA28, the athletes were joined by representatives from US Sailing and World Sailing to explain in more detail the reinstatement process as the international federation prepares its ‘questionnaire’ response to the International Paralympic Committee.

Marcus Spillane, representing World Sailing and a Member of the Para World Sailing Committee, was very direct about the Federation’s focus.

“Let me be very clear: reinstating sailing in the Paralympics is a primary objective of World Sailing. We are committed to continue driving the growth and development of this side of our sport, and it is a key cornerstone of our strategy.

“However, it’s important to remember that Para Sailing is not just about the Paralympics, although that is the reason we are here today, it is about growing the sport of Para Sailing as a whole.”

Para Sailing as a driving force post-injury
Ryan Porteous from San Diego shared his journey to the Rio Paralympic Games, where he finished fifth in the SKUD-18 class. A competitive sailor at Mission Bay Yacht Club from a young age right through to his teens, in a freak accident at 18, Porteous slipped on a dock and broke his neck. He picked up the story on how he found himself back in a boat.

“I had just got off to college and I went from having the most independence I’d ever had, to needing help doing the simplest of tasks. I spent three months in hospital post-injury and it was really tough. I was asking a lot of questions on what the rest of my life was going to look like after becoming paralysed.

“One of the things that was a bright light, was the possibility of sport, especially sailing, to get me out of my wheelchair and go do something that, most importantly, enabled me to have fun again.

“While I was still in hospital post injury, I was doing research on the Paralympics. I looked up Paralympics, I had heard of it beforehand, but never really looked into it. I saw that there was sailing and I was like, ‘woah – this looks awesome. I want to do that!’.

“So I started calling up friends and saying ‘hey, get me back on the boat, just throw me in and let’s get sailing again’.

It was a really cool experience to have friends there to get me back on the water. And then from there, I contacted the US Sailing Team and asked them, ‘How do I make this happen? How do I make the US team? How do I try to go to the Paralympics?’”

Porteous explained the impact the removal of sailing from the Paralympics was having on the wider sailing community.

“It’s pretty devastating, not just because it is the pinnacle of the sport and that really drove a lot of the funding, but also it was instrumental in attracting more people to the sport.

I had just got into Para Sailing and was seeing all these new people and new faces at regattas and it was so exciting to see everything building. And then to have it all taken away, just like that, the momentum was lost and it was pretty devastating.”

Finding freedom on the water
Sailing is one of the most adaptive sports for people with disabilities. Cristina Rubke, a European Hansa Servo champion and the US Sailing National champion in the RS Venture explained.

“Sailing is really unique and you can adapt it to somebody who has a very significant disability. I can’t use my arms at all, so I use my chin to do everything. I sail my Hansa Liberty with a joystick that is tied up under my chin and has two switches that connect to the sails – right and left for rudder control and up/down to bring the sails in and out. And the two switches control the main and the jib.”

Rubke doesn’t just sail on her own. “When I sail as part of a team, I have almost exclusively sailed with a sailor out of Florida called Kris Sheppe who is a blind sailor, very physical and very in shape. He and I are a great team because he can do all the things physically with his arms and legs which I can’t, but I can see everything and I can tell him what’s going on.”

For Rubke, it isn’t just the missed funding from sailing not being in the Paralympic Games that is important to her.

“It’s also important from a general perspective to have the broader audience for adaptive sports and making it clear that people with disabilities can compete at the highest level. And that there are sports like sailing, and sailing more so than many other adaptive sports, that are very inclusive and diverse.”

From the slopes to sailing – the most inclusive Paralympic sport
At 17, Jim Thweatt was hit by a car when riding a motorcycle and lost his leg below the knee and fractured his femur.

The first Para sport Thweatt raced in was skiing, but after he retired, he turned to sailing and combined his passion for both sports as a Classifier – someone who determines who is eligible to compete in a Para sport and groups the eligible athletes in sport classes according to their activity limitation.

“Out of all the Paralympic sports I’ve been involved in, sailing is probably the most inclusive and I’ve been around a lot of them at Olympic and Paralympic level. The reality is that you can take somebody like Cristina, or someone like me, and put them in a classification protocol where 1 is graded as the most severely disabled to a 7, which is the most physically able” Thweatt said.

“And then you take the boat, the platform, and you try and equalise the teams within that and within that sport. So, you may have 14 points on a boat, you can’t have two 7s, as it’s a three-person team, so you end up having to mix up your team. No two Paralympic Sonar teams are the same and so it is a very inclusive sport.

“The boat doesn’t care: it doesn’t care if you’ve got one arm, two arms, one leg, it does not care,” he concluded.

Alan Ostfield, Chief Executive Officer of US Sailing, explained the role of the National Governing Body.

“Our role at US Sailing is to promote sailing in all of its forms, and we’re hearing about the stories of inclusivity, accomplishment, overcoming obstacles, teamwork and gender equality. That’s at the core of what national governing bodies are here to support.

“It takes revenue to be able to make these wonderful things happen and when the sport leaves the program, you lose that measure of funding. So that’s an obstacle we have to overcome.

“The second thing is you lose the platform to generate additional revenue and the additional revenue is not only important for the elite athletes, but to promote the sport throughout the country, which is a valuable piece of the puzzle in promoting sailing in all of its forms and then getting the next generation of these great athletes on to the water.”

Andrew Clouston, Senior Vice President of Programs and Services at US Sailing, who has a responsibility for adaptive sailing said: “Taking away the pinnacle event that is so inspiring to people impacted our ability to attract more people into the sport, as well as keeping those already engaged and competing at all levels.

“We’ve got 80 organisations offering specific programming for Para sailors throughout the United States and we want to be able to build that base further. And having Para Sailing included in the Paralympics is a really critical piece of that picture.”

Para Sailing featured in five successive Games until, in 2015, it was announced that Para Sailing was being dropped from Tokyo 2020, along with seven-a-side football, in favour of badminton and taekwondo.

A maximum of 23 sports could have been included for 2020 but 22 sports were contested. Football was represented by a five-a-side version instead, while sailing was dropped altogether.

At the time, the IPC stated that both sports did not fulfil the IPC Handbook’s minimum criteria for worldwide reach and it was felt that the changes ensured the Paralympic sports program was kept fresh and featured the best Para sports possible.

Spillane closed the session: “World Sailing, along with its Member National Authorities is working hard to address the previous concerns raised by the IPC. We are way ahead of where we were in terms of our 50/50 male/female split and we’re aiming to be at 30 percent by the end of 2023.

“Despite the restrictions of the pandemic, our goal of 45 countries on six continents for our major events is on track, and at our last Hansa Worlds alone we had 181 sailors from 23 nations and six continents. So we are already well advanced on the criteria that we need to show the IPC why we should be included.

“We have a strong strategy going forward and are working closely with our Member National Authorities to prove that sailing should be reinstated in the Paralympic Games for LA28.”

Postscript: Paralympic competition was a demonstration sport at the 1996 Atlanta Games and in 2000 gained full Paralympic sport status at the Sydney 2000 Paralympic Games. It was competitive and grew in popularity and status from there, with world-class events taking place around the globe.

I have covered countless able-bodied and Para sailing events since 1986. The most thrilling of any racing I ever witnessed was the 2.4mR competition in solid conditions at the 2008 Paralympic Games in Beijing. It has left a lasting impression on me.

The racing was so aggressive from the start and the finishes so close. How officials got the finish order right, I don’t know, because it came down to a millimetre or so in most races. The other classes were equally competitive and well-thought out. It is a travesty that sailing has been removed from the Paralympics, depriving sailors from big fleets around the world.

To drop Para Sailing and seven-a-side football in favour of badminton and taekwondo is an injustice.