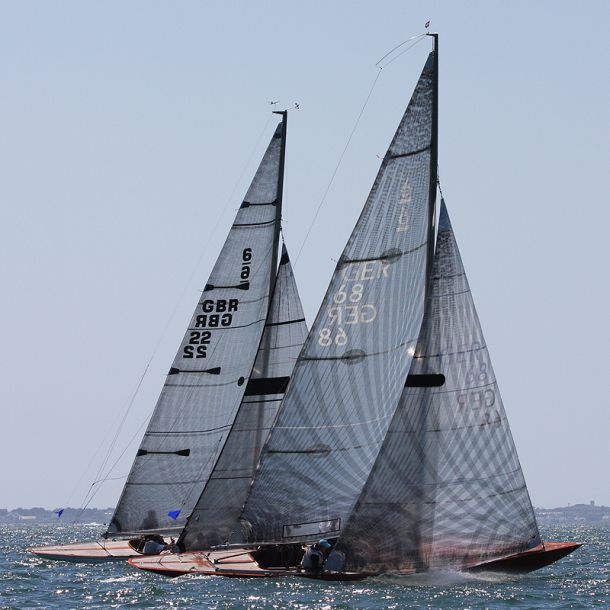 3 June 2015 – La Trinité Sur Mer, France – Having spent day two ashore because of strong winds, day three of the International Six Metre World Championship in La Trinité initially also looked to be in doubt, but this time for lack of wind. The forecast promised little more than four knots all day, but the race committee held out hope of a sea breeze and sent the fleet afloat on time to await developments on the racecourse.

At the appointed hour of 10.55 there was a light and briefly stable gradient breeze that lasted just long enough for the committee to set up a course and get the Open Division into sequence. Sadly as the seconds ticked down towards the start the wind shut off again so the AP was hoisted and a long wait began.

Fortunately that wait was eventually rewarded with a glorious afternoon of sailing in a westerly sea breeze of 7-10 knots that allowed the race committee to complete three windward leeward races, races four to six of the eight race series. Racing was cutthroat and with the discard now introduced there were shake-ups in both Open and Classic divisions. Going into the final day the points are so close that all the podium places remain to be decided.

In the Open Division local boat FRA177 Junior No Limit, owned and helmed by Yann Marilley finished second, third and ninth and has moved into the lead with a narrow two-point delta over Hugo Stenbeck's SUI132 Sophie II who scored a pair of wins and a fifth place to move up from third. The fortunes of overnight leader Steve Kinsey at the helm of CAN111 Blade were not so rosy and despite finishing second in race six he drops down into third overall, two points behind Sophie.

The Corinthian Division saw big position changes on both the race course and overall and tonight Peter Hoffmann's US83 Llanoria, the 1948 Olympic Gold Medal winner being skippered this week by Eric Jespersen, and Andy Postle's GBR22 Titia, a 1952 David Boyd design, are tied for the overall lead on sixteen points. In third place and trailing by five points is Lars Guck sailing N71 Flapper, who took the silver medal at the last Classic World Championship in 2013 and went into today as the leading boat. Lars still holds out hope of not being the bridesmaid this time around, but with just two races remaining to sail he will have his work cut out to make the top step of the podium. As Titia's Andy Postle said after racing, “It was a hard day at the office, and it's going to be an even harder day at the office tomorrow!”

The late finish to the racing day did nothing to dim the competitors' enthusiasm for a good party, which is lucky as there were two parties to enjoy this evening. On arrival home the boats were greeted by the sound of a local Breton bagpipe band welcoming them to a spectacular champagne dockside party hosted by ISMA Chairman Matt Brooks and Pam Rorke-Levy, owners of the stunningly restored Classic Lucie. Lucie, designed in 1931 by Clinton H. Crane and built by Nevins for Briggs Cunningham the Americas Cup skipper, took pride of place on the dock and was bedecked with flowers, a fitting celebration for both the party hostess and the winner of the sixth race.

Following straight on from the dock party came the Crew Dinner in the regatta marquee where the teams enjoyed a delightfully informal evening featuring wonderful local foods and wines and of course lots great camaraderie. Matt Brooks took the opportunity to thank the event's wonderful hosts, the Société Nautique de la Trinité-sur-mer, for their most generous hospitality.

Two races remain to be sailed and with the weather forecast indicating an easterly of around 11-14 knots tomorrow morning, backing into the south and dropping to sub six knots by mid afternoon, the race committee will be keen to get proceedings underway promptly at 11am tomorrow and conclude the event. If all eight races have not been completed tomorrow racing will continue into Friday. The regatta will close with a Gala Dinner and Prize Giving on Friday evening.