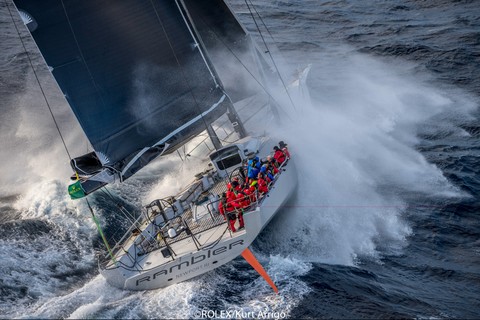 As expected, near gale force winds arrived in the early hours of this morning (Monday) rapidly changing the character of the 38th Rolex Middle Sea Race. To the north of Sicily, yachts are experiencing sustained wind speeds of 30 knots with a significant sea state. Gusts will be higher. The Royal Malta Yacht Club race management team has been busy through the night, monitoring the fleet’s progress. There have been a number of retirements as the increasing wind strength and building sea state test equipment and resolve. Leading yacht, Rambler 88 is on the downwind leg to Lampedusa, currently with Leopard, Hugo Boss and CQS in hot pursuit.

After a long hard beat during the night across the north coast of Sicily, George David's American Maxi Rambler 88 rounded Favignana around 0800 CEST this morning. With 30 knots of wind and a sweet downwind angle, Rambler 88 took off like a scolded cat towards Pantalleria. Averaging over 20 knots of boat speed, probably surfing closer to thirty, Rambler 88 was finally in her element.

Just over an hour behind Rambler 88, the 100ft Maxi Leopard, skippered by Pascal Oddo, is in her slipstream. While Rambler 88 is the quicker boat, Leopard is the bigger yacht and it will be interesting to see which of these two manages the conditions best. Alex Thompson's IMOCA 60 Hugo Boss was next off the breeze, after a bucking bronco ride to Favignana. Her crew will be relishing the prospect of hurtling downwind. Meanwhile, the majority of the fleet still racing is between Stromboli on the northeast corner of the race course and San Vito Lo Capo to the west. James Blakemore's South African Swan 53 Music was the provisional race leader after IRC time correction, according to the tracker.

Further back, there are a number of yachts still passing through the Messina Strait. A nasty change in the prevailing winds awaits the crews. The Mistral driven breeze has built waves of up to four metres and the Tyrrhenian Sea is a turbulent spot right now.

Offshore racing is often about making seamanship decisions aimed at preserving equipment and conserving strength rather than boosting speed. David Pizzuto, racing on American yacht Xpatriate, called in to report: “Xpatriate is currently close to Stromboli, all crew are in well and in good spirits. For the time being we have decided to stop and wait. Winds are reaching 25 knots so the crew will assess the situation later today. In the meantime, we are enjoying a coffee and relaxing.”

IRC Three
Tian Domonique's French Ker 46 Tonnerre de Glen was the first in Class 3 to round Stromboli, and held second after time correction, with the Swan 65 Lunz Am Meer leading at this point. Connor Doyle's DK46 Hydra – Performance Yacht Charter was in third.

IRC Six
Thomas Kneen's British JPK 1080 Sunrise was the first boat in Class 6 to round Stromboli and was second in class. Marco Bertozzi's Italian One Tonner Super Atax led the class with Igor Rytov's Russian JPK 1080 Bogatyr in third.