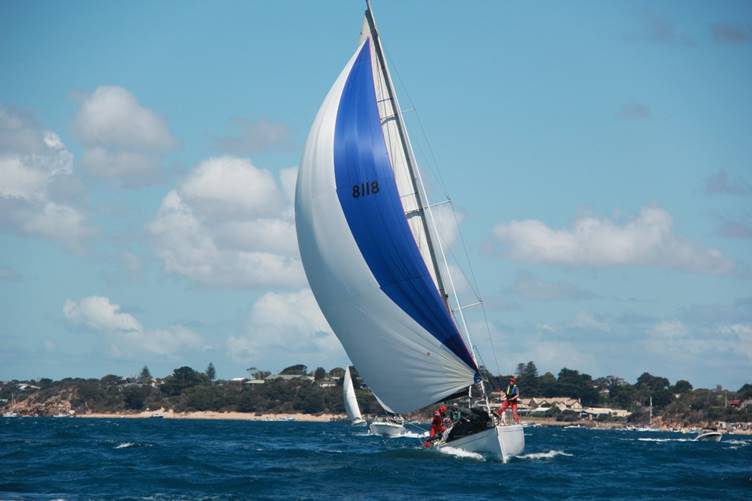 MERLION shortly after the start at Portsea

ONE FOR THE ROAD (Gary Prestedge) the Archambault 40 from Royal Yacht Club of Victoria has taken taken the line honours lead in the Wyndam Harbour Melbourne to Hobart Westcoaster race.

Earlier this afternoon, the line honours leaders in the Devonport fleet, PECCADILLO and TEVAKE II sailed into a windless hole and came to a halt which has allowed the remaining fleet to cut their lead.

Boat speeds were down to under 2 knots at times.  The entire fleet is now bunched up and are within 15 nautical miles of each other.

MERLION currently has 60 nautical miles to go to reach the finish line in the mouth of the Mersey River.  If they can maintain their current speed of 7 knots, they finish around 2:00am tomorrow morning Tuesday 29 december, 2015.

The Hobart fleet has enjoyed more breeze this afternoon and boat speeds are back up to 7 and 8 knots.

ONE FOR THE ROAD (Gary Prestedge) has had a great afternoon and is just ahead of EXTASEA (Paul Buchholz).  Both are currently abeam of Hunter Island on the North West tip of Tasmania.

At this stage, it does not look as though the brave tactical decision by OCEAN SKINS (Tony Fowler) to go West of King Island will pay off for them.