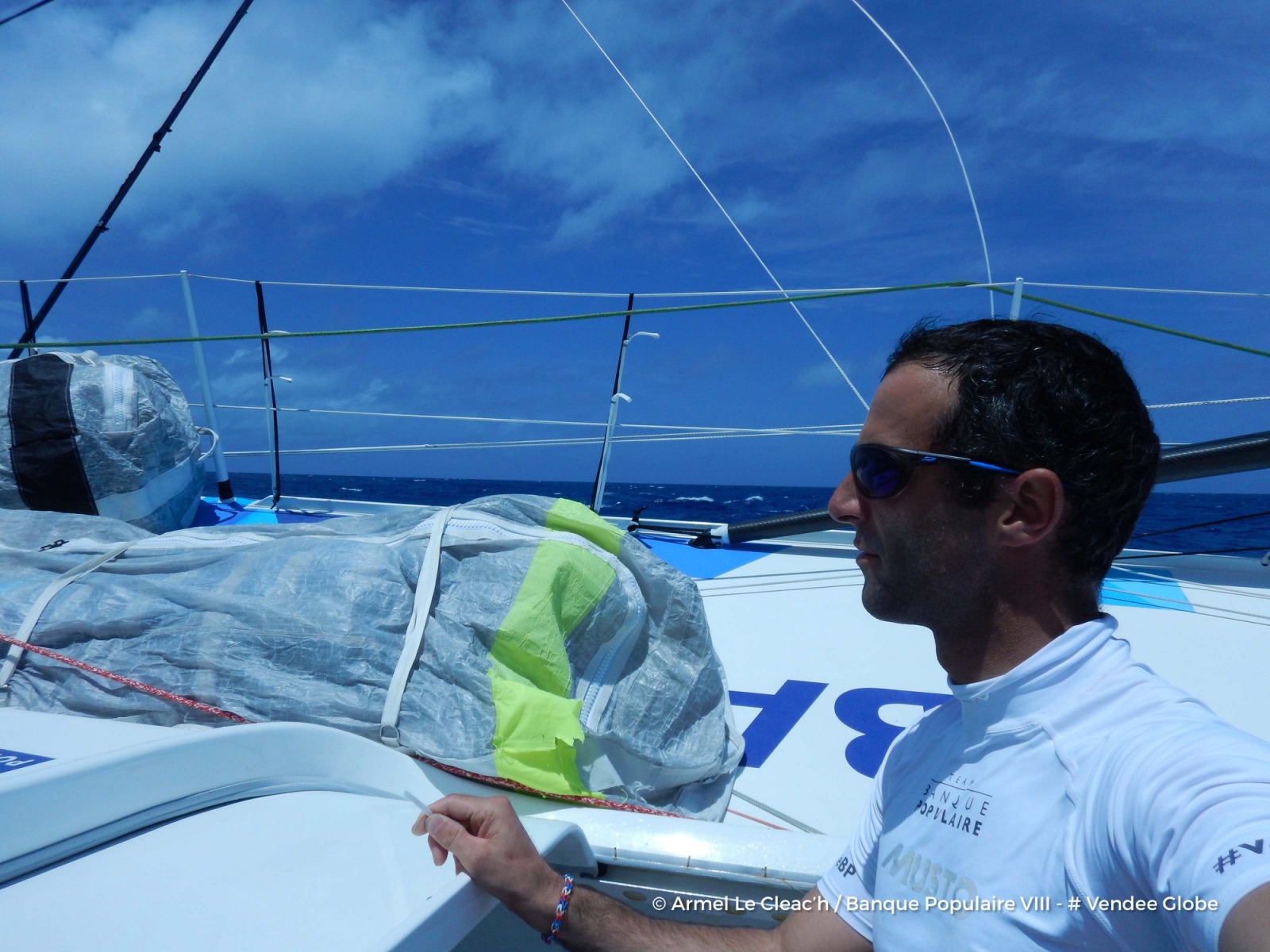 Vendée Globe leader Armel Le Cléac'h today spoke of his frustration as erratic weather in the North Atlantic complicates his path to the finish line. At the latest position update the Frenchman had a narrow lead of 99 miles over British rival Alex Thomson as the pair forged their way north, around 350 miles south west of the Cape Verde Islands.

A costly passage through the Doldrums for Le Cléac'h has now been compounded by complex weather uncharacteristic of this part of the ocean. By rights Le Cléac'h should be enjoying fast sailing on Banque Populaire VIII in steady north-easterly trade winds, conditions that could have allowed him to consolidate his lead over Thomson's Hugo Boss. Instead a large depression 1,500 nautical miles to the north is disrupting the trades and playing havoc with Le Cléac'h's bid for a first Vendée Globe title. “The situation isn't very clear in comparison to the forecasts,” the exasperated Breton skipper said. “For two or three days it's been hard getting north. It's been thundery weather since the Equator. The Doldrums travelled up with us with big clouds and heavy squalls. It hasn't been as thundery since yesterday, but is very cloudy, and we've got some more complicated patches ahead. It's different from the usual scenario and I'm at the limit of my understanding of the weather.”

Still hurting from seeing his 500nm lead at Cape Horn reduced to 146nm at the Equator, Le Cléac'h's quest for glory was dealt a further blow when he was snared by the Doldrums. Thomson's passage, by comparison, was much quicker and at one point he came to within 50nm of Le Cléac'h.

Now the pair must deal with whatever the weather throws at them as their race for the finish line enters its final week. “We don't have manoeuvres like we did in the Southern Ocean,” Le Cléac'h added. “It's just a question of trimming depending on what the wind throws at us. I thought I had got away from the Doldrums but that wasn't the case. It was more favourable for Alex and that's hard to take. For the moment, we're in front. We are going to have to see what happens.”

Six hundred miles south, third-placed Jérémie Beyou joined Le Cléac'h and Thomson in the northern hemisphere after passing the Equator at 1329 UTC. Beyou is likely to have a much simpler traverse of the Doldrums, which are forecast to shrink in the west in the next 24 hours. That will also be good news for fourth-placed Jean-Pierre Dick, who has gambled on his route close to the coast of Brazil paying off by allowing him to skirt round the western edge of the Doldrums.

French sailor Eric Bellion is set to become the ninth skipper to round Cape Horn tomorrow, followed closely by New Zealander Conrad Colman. Three thousand miles west, Dutch sailor Pieter Heerema was temporarily celebrating after the wind hole that has held him for several days started to relinquish its grip. “The position of the area of no wind was a little different to what I was expecting,” the 65-year-old explained. “I've been locked up and the waves were coming at me from everywhere. It was a bit bouncy without much progress, but in the last two hours a little bit of breeze has started to establish and I think that will build and we'll be on our way again.” No Way Back skipper Heerema, in 17th, said the waves had been so bad that he had not been able to carry out any routine maintenance despite the lack of wind. “The boat was moving so badly there was nothing I could do – I couldn't stand or sit so I was just lying in my bed being bored for a long time,” he added. “They aren't big jobs though, nothing that will hamper my progress. I'm just trying to point the nose east as much as possible in the direction of Cape Horn – I want to get out of the Pacific as quickly as possible.”