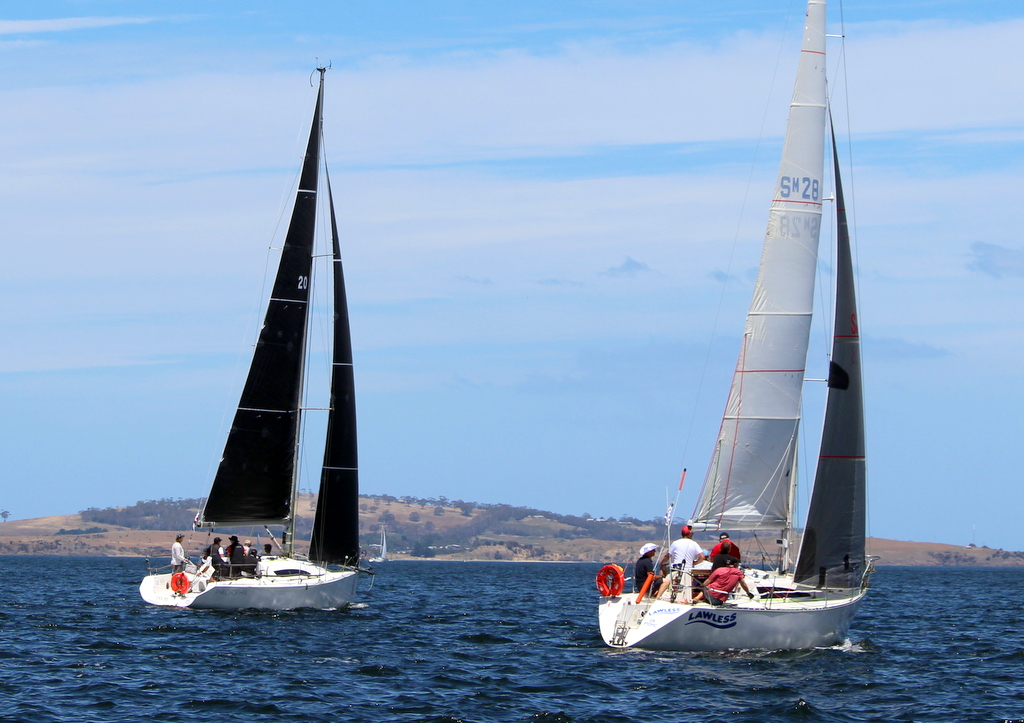 King of the Derwent winner

For only the second time in 41 editions of the iconic King of the Derwent yacht race, a northern Tasmanian boat has won Hobart’s iconic yachting event.

Lawless finished first on corrected in the IRC category to decide the King of Derwent, but also won the PHS category of the race.

This evening, the Governor Tasmania, Professor the Honourable Kate Warner AC, presented the major trophies for the Derwent Boat Sales King of the Derwent, joined by John Radonokis, principal of the sponsors.

The only previous yacht from a northern Tasmanian yacht club to win the King of the Derwent was The Trump from Mersey Yacht Club in 2003, skippered by Tony Rundle, a one-time Premier of Tasmania.

Since being owned by Stephen McELwee, Lawless has been a consistent club racer on the Tamar River and gained two podium results in this week’s Launceston to Hobart Race.

For the first time, the King of the Derwent attracted all overall handicap winners of each major ocean race: Alive (Sydney Hobart), Philosopher (Launceston to Hobart) and Whistler (Melbourne Hobart).

Today, Alive, skippered by Duncan Hine, the first Tasmanian yacht to collect the Tattersalls Cup in 39 years, spreadeagled the fleet in the light winds but finished last on handicap.

Lawless was among the smaller boats that benefitted from a freshening 18 knot seabreeze that brought them home under spinnaker after a frustrating dead calm earlier in the river race.

The 31-footer won the IRC category (and the King of Derwent) from Philosopher, Shaun Tiedemann Sydney 36cr and Whistler, David Aplin’s MBD36 which also won the Ocean Racing Club of Victoria’s three-race Sovereign Series.
Off-Piste, Paul Einoder’s Beneteau Oceanis 34 which won the AMS category of the L2H, followed this by taking out the AMS category of the King of the Derwent. Second place went to Philosopher, third to Whistler. Lawless did not enter AMS.

However, like all 25 boats in the KOD fleet, Lawless did contest the PHS category, winning from Off-Piste and Stewart Geeves’ Young 88, Footloose.