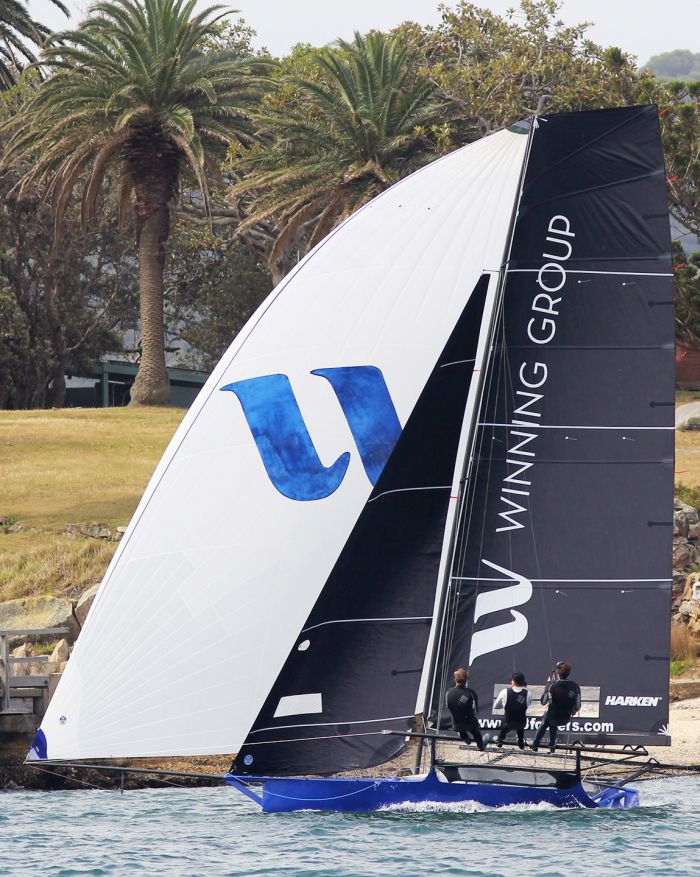 25/11/2019
A last minute crew change brought the 2010 JJ Giltinan Championship-winning team of Seve Jarvin, Sam Newton and Tom Clout back together again and the combination showed they had lost none of their 18ft Skiff handling skills when they brought Winning Group home an easy winner of Race 1 of the NSW Championship on Sydney Harbour today.
With the skiff's regular skipper John Winning Jr. unable to return to Sydney in time to compete, and Tom Clout's new skiff not ready to contest today's race, regular sheet hand Jarvin moved to skipper while Clout took his place on the sheet.
After trailing the leader Shaw and Partners Financial Services (James Dorron, Harry Bethwaite, Tim Westwood) over the first two legs of the course, Winning Group gradually edged away from the fleet before clearing out to cross the finish line 2m35s ahead of Shaw and Partners Financial Services.
The race behind the winner was close with six teams battling for second place.
In another impressive performance, following a second place overall in the Spring Championship, The Oak Double Bay-4 Pines (Aron Everett, Charlie Gundy, Ryan Wilmot) came back from seventh place at the first windward mark to finish in third place, 32s behind Shaw and Partners.
Finport Finance (Keagan York) finished fourth, ahead of Appliancesonline.com.au (Brett Van Munster), Smeg (Michael Coxon) and Rag & Famish Hotel (Bryce Edwards).
The race, which was sailed in a 8-10 knot SE wind, saw the fleet split into two separate groups on the windward leg from the start in Taylor Bay, across the harbour to Rose Bay.
Shaw and Partners was always in, or close to the lead, on this leg of the course although the young Rag & Famish Hotel team was always putting pressure on the defending champions.
Shaw and Partners led by 15s from Winning Group and Rag & Famish Hotel, which rounded the mark together, followed by Finport Finance, R Marine Pittwater (Marcus Ashley-Jones), Smeg, The Oak Double Bay-4 Pines and The Kitchen Maker-Caesarstone (Jordan Girdis).
After a long spinnaker run from Rose Bay to Robertson Point, the leading positions saw little change in the leading group.
Winning Group and Shaw and Partners took opposing courses for the windward leg back to Clark Island, a move which enabled Winning Group to establish a 20s lead over the fleet, with Smeg third, followed byFinport Finance, Rag & Famish Hotel and The Oak Double Bay-4 Pines.
After a two-sail reaching leg from Clark Island to the Chowder Bay mark, then another windward leg across the harbour into Rose Bay, Winning Group established a 30s. lead of Shaw and Partners.  The third placed Smeg was now another one minute behind Shaw and Partners, followed by Finport, Appliancesonline.com.au and The Oak Double Bay-4 Pines.
The following spinnaker run to Taylor Bay sealed the fate of the fleet.  Jarvin elected to sail a course west of Shark Island, while the rest of the fleet kept to the east.  When the fleet reached the Taylor Bay mark, Winning Group's lead had gone from 30s to 55s and the race was all but over.
In true champions form, the Winning Group's crew continued to dominate over the remaining three legs of the course as they powered away for the easy victory.
Shaw and Partners, The Oak and Finport were together at Rose Bay before The Oak Double Bay-4 Pines headed for home in second place, but Shaw and Partners was just a little stronger over the final windward leg to the finish
A special mention has to go to Yvette Heritage and her team on Noakes Blue, which finished in eighth place, ahead of R Marine Pittwater, Yandoo (John Winning) and The Kitchen Maker-Caesarstone.
The Australian 18 Footer League's 2019-2020 Season continues next Sunday when the club will stage Race 2 of the NSW Championship. Spectators can see all the teams while they are rigging, then follow the racing on board the club's spectator ferry, which leaves Double Bay Wharf, alongside the rigging area, each race day at 2pm. Book online through the club's website www.18footers.com
The AeroMedia Live Broadcast team will also be out on Sydney Harbour to capture all the action for those who can't make it onto the water.  The livestreaming is available by going to www.18footers.com and clicking on the '18 Footers TV' link.
Frank Quealey, Australian 18 Footers League