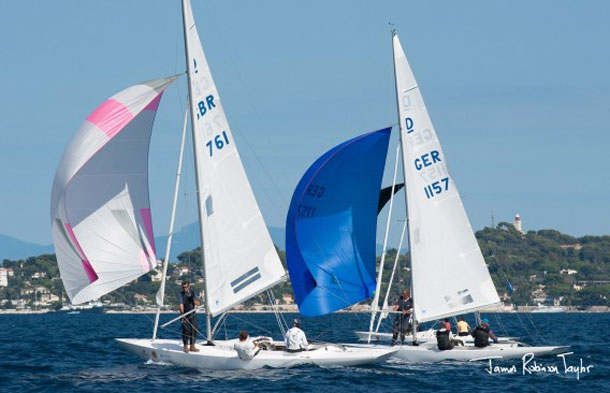 Last day of the regatta sees champions coming forth

It took a while for the breeze to set, but at around 1300 a good wind set over the Bay of Cannes and the Golfe Juan enabling the two fleets to dock out, headed to their respective race areas.

The Dragons had their final and decisive race on a windward/leeward course and the classics a long triangular coastal. As the day went on conditions improved, with the wind increasing to 12, then 15 and later 18 knots: a perfect setting for a sailing race.

Schmidt is king of the Dragons

Germany's Michaël Schmidt (M3) and his crew started their last race at the Régates Royales with a good margin, enough to play it safe and get the gold.

The race area for the Dragons was not that easy to decipher, a shifty south-westerly of around 12 knots funnelling between the Lérins Islands and the upwind mark, forcing tacticians to anticipate each and every little shift. First went to UK's Yvan Bradbury (Blue Haze) who won the first race of the series, his countrywoman Gavia Wilkinson-Cox (Jerboa) getting silver and Estonia's Mihkel Khosk (AAB Fun) bronze. Provisional leader Michaël Schmidt (M3) finished in fifth, winning the overall 2015 series with a 14 point total score, distancing Yvan Bradbury (Blue Haze) by four points and Gavia Wilkinson-Cox (Jerboa) by five.

The fight for the podium places was as tight as it could be, with German Michaël Zankel (Powwow) finishing fourth with 23 points.

The day started well on board Mariska, one of the four 15MI still sailing and a veteran of the Règates Royales, first out at the committee end of the line and then a tack to go and look for the right shift under the cliffs of Théoule.

The J Class Shamrock V and Mariska gybe-duelled, sailing just a few metres from the rocks. With all her sails up, the 15MI pushed ahead, crossing the finishing line in first.

The rest of the fleet kept scraping the cliffs, trying to profit from a good wind shift on the upwind leg. After three races, the older boats are on top of the provisional scoreboard in nearly all the classes: Marigold among the gaffers,Moonbeam IV in the Big Boats division, Cholita in the > 15 metres Marconi class and Manitou in the bigger Marconi division. All of them are looking good for the final victory.

But the fight is still very open among the Vintage with Ea keeping a slight two-point margin on Sagittarius and in the Spirit of Tradition division, where Helisara leads by two points on Freya 2003. In the Tofinou class, Patrice Riboud (Pitch) will have to play his cards right tomorrow to avoid a comeback from Edward Fort (Pippa) who won today's race.

Focus on the Fighting Forties

They are both New York 40s, sister ships, despite having very different rigs. The NY40 was commissioned by the famous New York Yacht Club in 1916 to naval architect Nathanaël Herreshoff who had already been exploring boat design from an early age (with Violet in1864) to the last years of his long life (with Belisarius in 1935). When he died on June 2, 1938 aged 90, he had created no less than 18,000 designs and over 2,000 boats. When the New York Yacht Club contemplated creating a one-design for its members, it was obviously Herreshoff they turned to.

He already had six America’s Cup wins under his belt with Vigilant (1893), Defender (1895), Columbia (1899 and 1901), Reliance (1903) and Resolute (1920) that were among the most impressive yachts designed at the time. Herreshoff, with his degree from MIT, also designed powerboats, catboats, fishing boats, warships, dinghies, sloops, ketches, schooners and even a catamaran (Amarylis-1875).

This new rule restricts waterline length to 40 feet, enabling Herreshoff's creativity to explore all kind of shapes. In 1900 he created four one-design 70 footers (others will follow over the coming years) that were quite revolutionary for their light weight, their long overhangs and their flat decks. “The main feature of these Herreshoff designs is that they can sail in virtually any sea condition.” commented famous American journalist Casper Whitney.

The Fighting Forties became an immediate hit: in 1916 an incredible number of twelve boats were built, including Pauline (later renamed Chinook), Maisie andRowdy, the latter from this first batch and two more, Marilee and Rugosa,were launched in1926. With her wide beam and a ballast ratio higher than 50%, the NY40 was extremely responsive under sail, so much that one of the NYYC's members, Mr Edwin J. Schoettle declared: “They’re excellent boats in strong winds because are easy to handle. Someone told me that a Forty has never had to reef her mainsail…” Yet, the NY40 was conceived to have a reduced three-men crew, and shortly after their launch the boats were fitted with a bowsprit and their sail area was increased.

In 1924, the NY40 Memory with a Marconi yawl rig dominated the Bermuda Race (despite not being designed for offshore races) and in 1930 Rugosa,thelast NY40, wins the very same event. And today, Rowdy and Chinook are still here, and a living testament of Nat Herreshoff's genius.