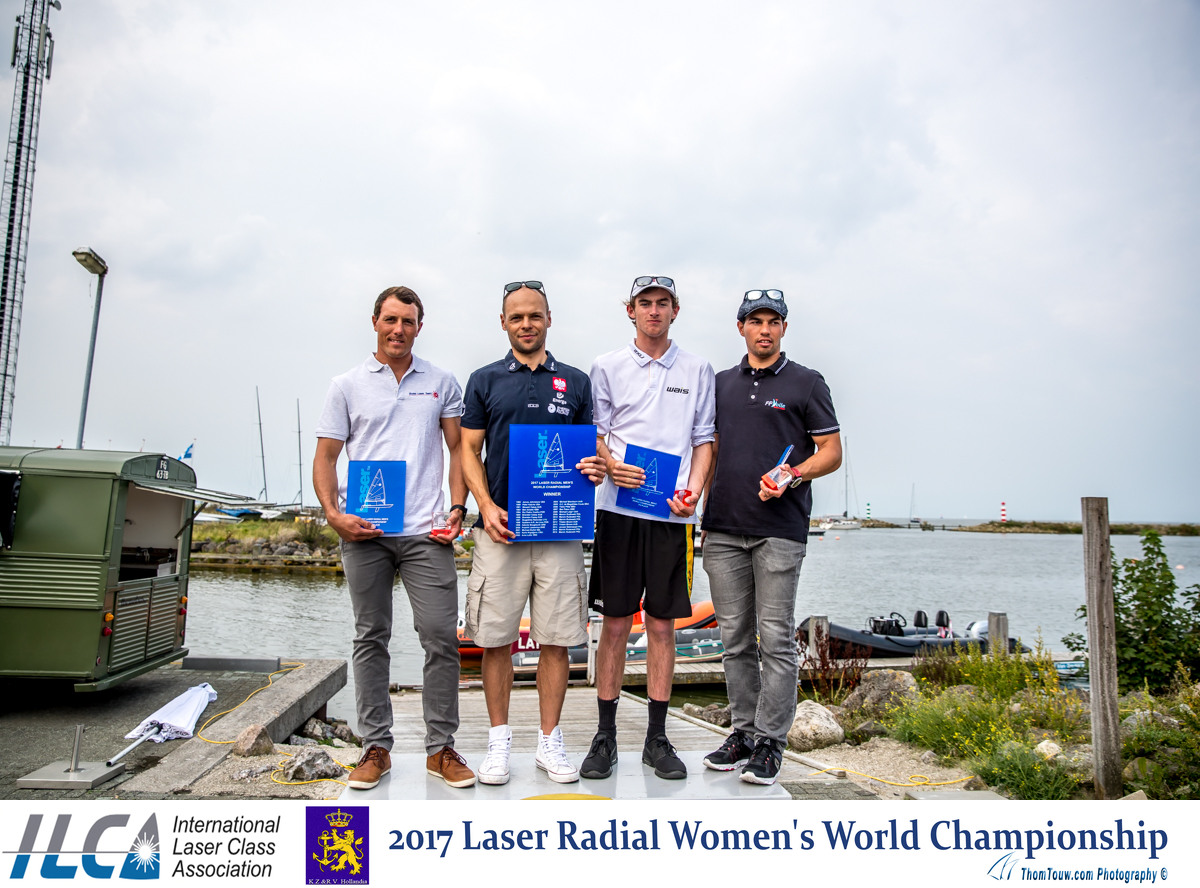 Medemblik, Netherlands: No races were sailed today, due to lack of wind, so yesterday’s results stand and new Laser Radial World Championship titles were decided with ten races completed in six days.

The morning brought postponement on shore until about noon. Eager to complete the Final Series and hopeful of more breeze all three fleets sailed out on the IJsselmeer in about 5-6 knots.

Unfortunately, the wind gradually died and the AP flag was hoisted. Everyone waited on the water until 15:00, after which no race could start on the final day. At 14:30, the Silver fleet was sent to shore, at 14:45 the Men’s fleet followed, and finally at 14:55, the Gold fleet headed in.

“It’s amazing,” described Bouwmeester. “I so badly wanted to prove that I was worth my Olympic title, and to do it in my home country, to show our sport, to show myself, for the nation…it’s just an incredible feeling.”

From the Australian Sailing Team:

Zac Littlewood is maintaining a measured approach after announcing himself on the international stage by becoming one of the youngest Australians to secure a podium finish at a major regatta.

The 16-year-old from Perth sailed beyond his years at the Laser Radial World Championships in Medemblik, the Netherlands, surprising the world’s best with a stunning third place overall.

Just two days before the open event started, Littlewood finished 10th from 280 entrants at the Youth World Championships and came second in the U17 Division.

“Being the youngest person competing in the event made it even more exciting when I started having some good races, especially two race wins by a reasonable distance,” Littlewood said of the senior regatta, which was won by five-time World Champion Marcin Rudawski of Poland.

“After a tough first day I had to remain consistent and focused as I couldn't afford any more bad races. Even though the fleet at the men's worlds was smaller (than the youth fleet), the competition was just as hard as the sailors were more experienced and strategic.

“Going into this event it was more about learning and gaining international experience, so I'm really stoked with my result.”

Littlewood, who sails out of Fremantle Sailing Club and Royal Freshwater Bay Yacht Club – and was accepted into the Western Australian Institute of Sport earlier this year – said his goal was now to qualify for the Australian Sailing Youth Team at the Australian Youth Championships in Queensland next January.

In the women’s Laser Radial World Championship, young Queenslander Mara Stransky showed her potential with a second and a bullet in Races 3 and 4 and eventually finished 43rd, while Rio Olympian Ashley Stoddart struggled early but worked her way up to 46th. Zoe Thomson finished fifth in the Silver Fleet, Elyse Ainsworth came ninth and Marlena Berzins 40th.