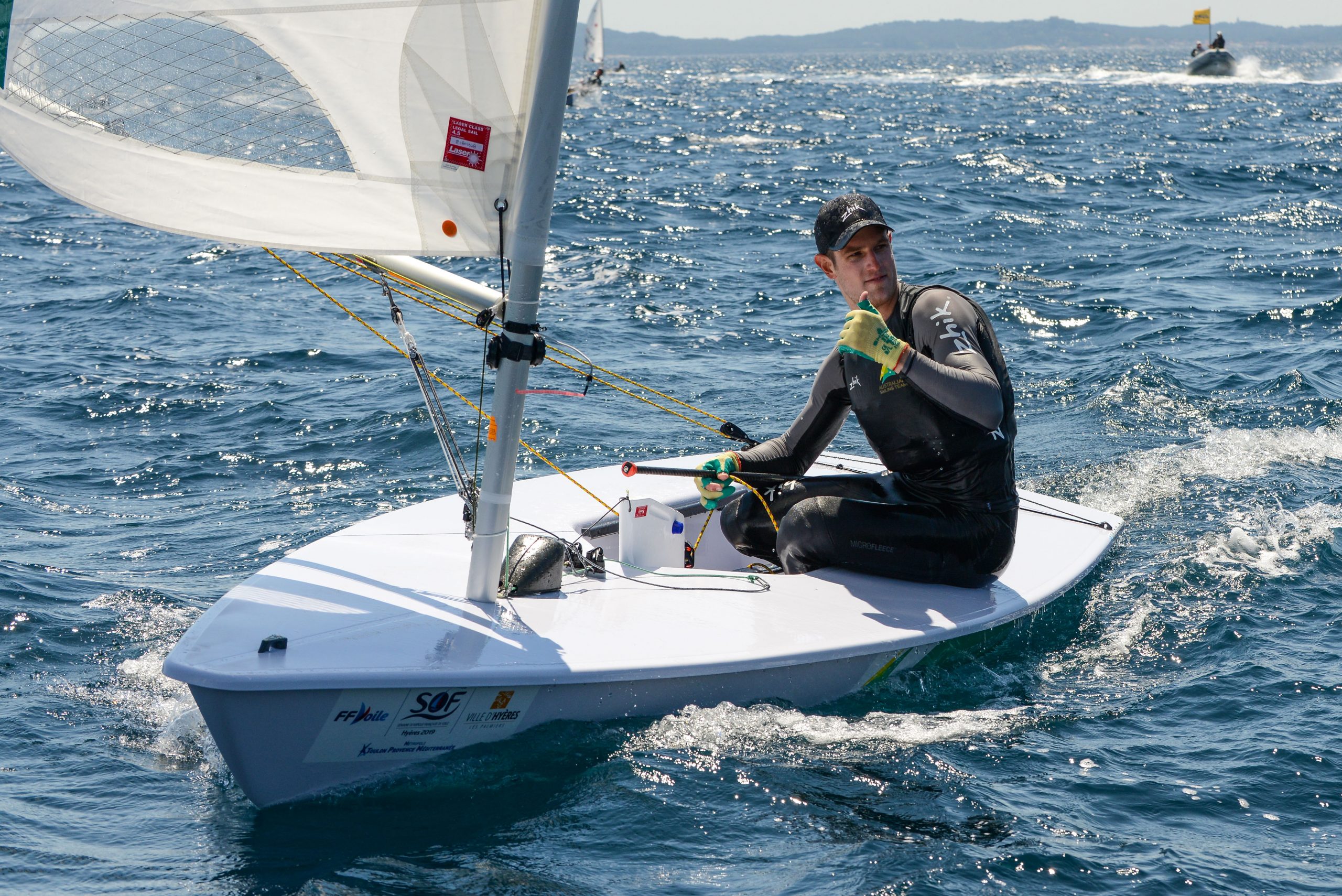 Medals were decided and handed out to close the 51st edition of the Semaine Olympique Française in Hyeres, France today, with Australians taking Gold by 43 points, Bronze and fourth.

With gold already secured on Friday, Australia’s Matthew Wearn sounded like he did not go out and party, instead duly went out and did what he has been doing all week – blasted past the opposition and won the Medal Race. That made it eight wins out of 12 and he finished 33 points clear of his nearest rival.

New Zealand’s Rio 2016 bronze medallist, Sam Meech, did not have the race he wanted, but he had a five-point buffer over Australia’s youngster, Luke Elliot and a sixth-placed finished was enough for silver. Elliot started well, but dropped back to finish seventh. His more experienced countryman, Rio 2016 Olympic champion Tom Burton, finished fourth to win Bronze by a heartbreaking point.

Australia finished with four sailors in the top six.

Matthew Wearn (Australia, gold):“I’m really happy. It’s nice to get a win under my belt in 2019 and relieves a bit of pressure, you know what it takes to win regattas. (The Medal Race) is almost easier when you have already won, because you can just go for it and ground the track as fast as you can.”

Sam Meech (New Zealand, Silver):“This is the reason we came – we know Hyères is a great sailing venue. Usually we get all the races in here and we’ve been coming back for quite a while now.

“It wasn’t quite going to plan (in the Medal Race). I thought I was doing the right thing, but I got stuck in between trying the sail shifts and get into the positions I needed to be. I went a little defensive and got lost on the first beat. I was mid-fleet the whole race.

“I was a boat behind Luke (Elliot) for most of the race, I was just trying to stick on his tail, then I got past him. He was unlucky; he got flagged in the last run. Although, in this weather that doesn’t cost you that much because you turn and you’re still right in it.

“It really tightened up between everyone on the last run. For me it was that Thursday (two 13th places), one bad day, but otherwise pretty happy with how I sailed the rest of the week.”

Michael Blackburn (Australia coach):“It’s been pretty good. Hyères is a pretty familiar venue for us, I’ve been here 19 times; these guys are up to six, seven, eight times too. I think the Laser fleet is still very open. Matt (Wearn) had a great regatta here. He sailed really well, but he knows he’s only as good as his last race and there’s more to come in two weeks at the Europeans in Porto.

“We’ve only got two regattas in Europe this year; this and the Europeans, so both are important working towards the Test Event and Olympic qualification – and they know that. (Managing a big successful team) It’s a personality thing, these guys have really good personalities and they understand that it’s a competition, but that ends when they come ashore and they get on really well with each other.”

The shock of the regatta – 28-year-old Finn, Tuula Tenkanen, started the day nine points behind and only finished the Medal Race in fourth place. It proved to more than enough though, as 21-year-old Maria Erdi trailed in last. Erdi took a risk and will have learned several valuable lessons about trying to match race your rival out of contention, but as she said, it will take a few days to feel wholly philosophical.

With both well clear of the rest of the field, Erdi had planned a match race within a race as way of gaining experience in case she needs to do this in an Olympics. The pre-start went well, but Tenkanen was able to tack on her immediately and then got away on the first beat.

Doubtless unsettled and in unfamiliar water, Erdi then compounded things with a tactical error of not just keeping as close to Tenkanen and the rest of the field as she could, instead she went her own way on the first downwind and could not find a way back. In the end eighth would have been enough for Gold.

Two years ago in Hyères, Tenkanen was in the same position against Belgian’s Evi Van Acker, but was completely match raced out of it. That is where experience counts.

Tuula Tenkanen: “I was able to sail my own race and I just tried to finish as well as possible. I was a bit worried for the whole of the pre-start but that’s normal I think. And it was quite tight with the points, it was tight all the way until the finishing line, because I needed to have four boats between us it wasn’t clear until we finished. I wasn’t sure until she finished.

“Now we know more clearly what I need to do to improve because we had very different conditions here; we had both light and strong winds and offshore and onshore wind, so it was a very good regatta to see where we are. Next time, we’re going to race in the Europeans (in Porto in two weeks) so it’s always good to nice week before that.”

Maria Erdi: “We decided before the race that I was going to try to take Tuula out. This was the first time I had tried to do this in a regatta, and I knew there was a chance I was going to lose Gold. I think I did a pretty good job pre-start, but she was third and I was seventh at the top mark. There was quite a lot of separation.

“Then on the first run, I made my biggest mistake, because I separated from her and the rest of the fleet. Everybody gained on me and I had to go around the wrong mark and it was a disaster from then on.

“I’m happy that I did it (try to match race Tuula) because I learned a lot and I’m still happy with Silver – if someone had told me at the beginning of the regatta I’m going to win Silver, I’d have been like “cool”. I know I’m going to be fine after a few days, now I’m feeling a little bit disappointed. Next time I’m going to come out on top.”