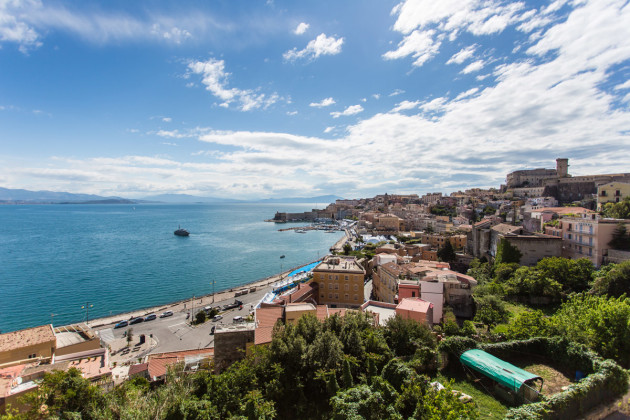 The Finn class is going Italian over the next few weeks with two major championships taking place at almost opposite ends of the country – Gaeta and Torbole – with a combined total pre-entry of more than 500 boats. Both events are notable landmarks for the class, but for different reasons.

The Finn Gold Cup is first up and begins in scenic Gaeta this weekend, with around 80 pre-entries. The Finn World Masters follows immediately in Torbole on Lake Garda on Friday 13 May.

It may well yet prove to be unlucky for some, but those lucky enough to be competing in Gaeta will be taking part in the 60th Finn Gold Cup, which concludes on Friday 13. Meanwhile those heading to Torbole for the Finn World Masters (and there are many sailors doing both events) will be part of the largest Finn event of all time. There have been an astonishing, but not really unexpected, 420 pre-entries.

Both of these landmarks highlight the popularity and strength of the Finn Class at the moment. It is a modern classic which attracts and nurtures sailors from all generations and all walks of life. It is a fantastic ambassador for Olympic sailing at its best, but also a school of life for ambitious young sailors, and a great thoroughbred for those who like close, tactical, singlehanded racing, and which keeps you young and always coming back for more. It remains for many, of all ages, the ultimate challenge. It is a class for life in a sport for life.

One of the other extraordinary facts about the season so far is that a different sailor has won each major regatta. Jorge Zarif (BRA) won in Miami, Pieter-Jan Postma (NED) won the Europeans in Barcelona, Josh Junior (NZL) won in Palma and Jake LiIley (AUS) won in Hyeres. Everyone has pushed themselves to be at the top of their game for the upcoming Olympics, as well as fighting for Olympic selection.

Another remarkable fact is that the defending world champion, Giles Scott, has not won a major Finn regatta this year. Of course, before that he put in an unbroken two-year stint, and since winning the 2015 Finn Gold Cup in Takapuna last November, he has only sailed one European regatta with several trips to Rio in between, as well as his America’s Cup duties. In spite of all that, with three world titles already under his belt, he remains the favourite next week. A fourth title would elevate him to the second most successful sailor in Finn Gold Cup history. While there is not any real pressure on him, he will be intensely keen to make amends for his defeat his Palma, albeit with gear failure there a contributory factor.

Zarif, Postma and Lilley are also competing next week and are part of the group chasing, and getting closer to Scott. With just four months to go to the Olympics, this will be the final big test of almost all the top sailors as many are sending their gear to Rio after it ends. But there are also some big names missing after an already packed early season. Some of those are already on their way to Rio, while some are preferring to train at home. Of the 23 Finn sailors heading to Rio, about eight will be missing from Gaeta, so the event may be more about testing and competition readiness, than laying down any markers.

The Finn Gold Cup will also be the end of most of the ongoing Olympic trials.

The compelling Croatian trials between Kljakovic Gaspic and Vujasinovic will conclude next week. On paper Gaspic should be favourite, but Vujasinovic has taken the advantage in their last two meetings, so it looks to be heading for a very close finish.

The Italian trials will also end in Gaeta, with very little light between the top riders. Michele Paoletti (ITA), Giorgio Poggi (ITA) and Filippo Baldassari (ITA) have all produced good results over the past year but none outstanding enough for automatic selection.

Canada is also still in selection phase, with the front-runners being the more experienced Martin Robitaille (CAN) and newcomer, Tom Ramshaw (CAN).

The Australian trialists Lilley and Oliver Tweddell (AUS) will be in Gaeta, following an exceptional performance in Hyeres last week and news is still pending about a decision on selection.

All told, the fleet competing for the honour of winning the 60th Finn Gold Cup contains eight former world or European champions. As always, it will no doubt be an epic battle.

The 60th Finn Gold Cup begins on Thursday 5 May with the opening ceremony on Friday 6 May. Racing begins on Sunday 8 May with a 10 race opening series before the final race and medal race on Friday 13 May.