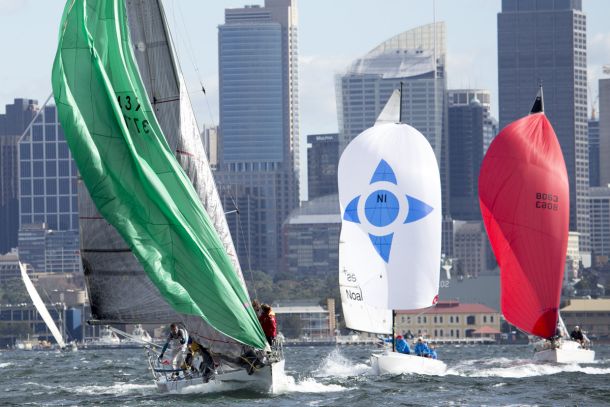 A stiff and gusty westerly meant a quick romp around the Sydney Harbour race course and back to the Cruising Yacht Club of Australia in time to celebrate Mother’s Day after Race 3 of the Land Rover Winter Series.

A pleasant sunny morning masked what lay ahead when the various divisions headed out to the start line near in the vicinity of Point Piper and Shark Island, but by 11.45am, the sun was turned down and conditions became icy, although the sun kept peeking out every so often to take the chill off.

Winds whipped up as gusts swept the Harbour, but sailors were unfazed as the first two races of a normally light air start to the Series were also windy ones, giving crews the solid practice they will need ahead of the upcoming offshore season which will be heralded by the Land Rover Sydney Gold Coast Yacht Race in late July.

“That was our first winter westerly and it was quite blowy,” Principal Race Officer Denis Thompson remarked from the start boat. “I saw one gust of about 28 knots, but mostly the wind was in the 18 to 22 knot region, which of course produced a few broaches and breakages. “It was good to get a race finished quickly and to have quality racing. “We had a decent turnout – nearly 100 boats – considering the forecast heavy winds and it being Mother’s Day.

“Everyone had their chances today. Ray Roberts (OneSails Racing) started as back marker in Division A1, but he came through to win. Obviously he and the crew are sailing the Farr 55 well,” Thompson ended.

John Anet sailed his Archambault 31, Precision, to a ‘precise’ victory in Division E, giving the rest of his division a pasting. Precision is best known to most as Aroona, which as a new boat finished runner-up in division at the 2010 Australian IRC Championship, missing the win by one point.

“We seemed to get out in front very quickly and stay there,” Anet commented after the race. “We pretty much had the race to ourselves. The crew sailed well – the boat is a bit of a handful, but it sails well. We saw one gust of 30 knots, but mostly the breeze averaged around 20 knots. We had our moments in those conditions, but we didn’t break anything.”

The day was tailor-made for the older heavyweight heavy hitters and those boats did not disappoint.

In Division F, Doug Sturrock and his crew pulled out all stops to hold off Greg Mason and Barb Maunsell’s Davidson 37 Cruiser, Sinewave to claim victory. Sturrock, of Sturrock’s Chandlery fame, made the best of the big conditions with his Des Townson 11 metre wooden boat.

“We did a Steven Bradbury (the speed skater) really,” Sturrock maintained this afternoon. Double Trouble went to the wrong mark and handed us the win – thank you Steve Wyatt,” he said, referring to Double Trouble’s owner.

“All in all it was a tough day at the office; a big windy westerly. We sailed fairly conservatively, as it was very gusty to start, but then the  gusts died down quite a bit and lulled us into a false sense of security, because then it freshened again. In the end we hoisted the big kite to hold off Sinewave, which was bearing down on us.

“I was lucky to have ‘Killer’ (Lee Killingworth) on board. I couldn’t have done it without him. It also helped having my young nephew Anthony aboard to do the bow duties. He’s six feet five inches tall and all muscle,” Sturrock said.

Weekly prizes are awarded to the top three placegetters in each division and include exclusive CYCA Land Rover Winter Series merchandise. One lucky division winner is drawn each week to receive a Land Rover Range Rover Evoque experience for a week. Derek McDonnell, winner of Division K with, Applejack, was this week’s winner.

In addition, the Noakes Group is providing a lift stand launch and two free laydays for one lucky division winner each week. Division G winner, Jublilee, (Ian Arthy) was the recipient this week.

Race 4 of the Land Rover Sydney Winter Series will be held on Sunday 17 May starting from 11.30am.