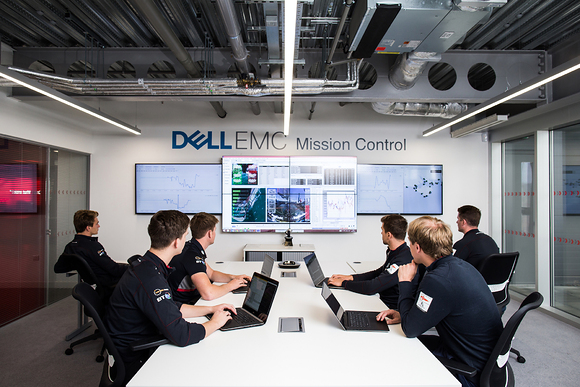 One of the team's most successful mixes of technology and sustainability has been the BT Virtual Chase Boat. The concept was simple enough; transmit sufficient data, HD video, images and audio from the boat directly ashore to the 'Dell EMC Mission Control' room at the team's base, so that engineers and designers can watch and analyse the sailing and testing sessions without going on the water.

The advantages were the cost and energy that would be saved. It would remove a boat from the water every sailing day, significantly reducing the team's carbon footprint. The BT Virtual Chase Boat (VCB) could supply all the data that curious coaches, designers and performance analysts would ever need, and it would deliver that data to their office desks.

The VCB was successfully developed, tested and put into operation in Portsmouth with help from the team's Technical Innovation Group (TIG), chaired by the management and technology consultancy PA Consulting Group. The idea of the TIG was to complement Land Rover BAR's existing design and engineering team, by bringing together experts from outside the marine industry to identify and apply technologies from other sectors.

Once it was operational, the team's engineers quickly came to rely on the VCB, and thoughts turned to replicating the facility in Bermuda once the team's sailing operations moved to the island in late 2016. If anything, the need was even greater in Bermuda. Land Rover BAR is a British team, with a permanent British home, and the strategy had always been to keep the majority of the design and engineering support in Portsmouth, where they would be relying on the Virtual Chase Boat to monitor the progress of the sailing and testing in Bermuda.

To transfer the VCB to Bermuda two technical problems would need to be overcome. The first was the data link ashore to the team's Bermuda base from the America's Cup race course out on the Great Sound, and the second was the link from Bermuda back to Portsmouth. TIG and Technology in Sustainability Partner BT had the right technology to deliver on both counts.

The major concern for the Bermudian extension of the VCB was that its integrity and operation should be unaffected by the influx of people and media during the period of America's Cup racing. In Portsmouth, the fact that the sailing water was lined on both sides by relatively densely populated areas meant that public networks could be relied upon.

The situation in Bermuda was very different. The more isolated piece of water and the island's relatively small population meant that during the racing period, the spectators and media attending could be expected to strain all the public data networks. The team couldn't afford to discover that suddenly – right when they needed it most, the link to Bermuda had been overwhelmed, crashing data and video delivery to Portsmouth.

It was decided that a proprietary system was required, something that would never have to be shared, or as the jargon would have it, an uncontended link. A contended line or data channel is a shared data channel; most residential and many businesses use them and that's why your internet link slows at busy periods – that moment about 9pm when a streamed movie starts breaking up and buffering. This is what the team could not afford to happen.

The second part of the problem, from Bermuda back to the UK was the easiest to solve, with BT providing a 45Mbps leased line back from Bermuda to the UK. This is an uncontended, or unshared data line guaranteed to run at the advertised rate at all times.

The section from the boat to the shore was more problematic. The cellular network was the perfect solution technically, but the team had already discovered during the Louis Vuitton America's Cup World Series event in 2015 that the public network didn't have the required bandwidth out in the Great Sound.

BT researched, sourced and provided a solution – a private cellular network, complete with mast, antenna, receivers and software; military-grade ship-to-shore 4G LTE wireless technology. It's the kind of thing that's supplied to the military when they need to set up their own networks in the field. The mast, antennas and receivers were all shipped to Bermuda, support engineers helped the team install and test them and when the boat went sailing for the first time, everyone in Portsmouth was watching too.

“The BT Virtual Chase Boat has been a tremendous success story for our technical team. It's brought my engineers closer to the sailing boat than ever before, whilst at the same time reducing our carbon footprint as a team. I'm enormously grateful to PA Consulting Group and BT for their technical and personal support without which this would not have been possible for us,” said Richard Hopkirk, Engineering Manager at Land Rover BAR.

“We're really excited to be combining our strengths in next generation fixed and mobile networks to help Land Rover BAR power ahead as they compete to win the 35th America's Cup. Our networking and big data expertise will help the teams on both sides of the Atlantic to deliver better performance from the boat. It's all about our ability to help the support teams and crew to make better tactical decisions through access to better quality data in real time. We can't wait to see the results and everyone at BT wishes Land Rover BAR every success in the competition.” said Howard Watson, CEO, BT Technology and Service Operations (TSO)